One of Canada’s best-known children’s writers, Jean Little, passed away at the beginning of April at the age of 88.  With COVID-19 dominating the news cycle, her death attracted little attention. 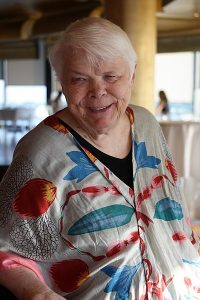 And yet, as we live through a severe epidemic, perhaps we need Jean Little’s wisdom more than ever.  Little created a world in which injustice was real, but her characters did their best to make the world a kinder place. 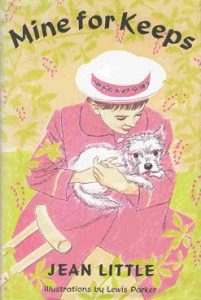 Cover of Mine for Keeps. The picture on the cover is a little girl in a pink dress and hat holding a dog. There is a crutch on her lap.  (Wikimedia Commons)

Mine for Keeps (1962) featured Sally Copeland, a young girl with cerebral palsy returning to live at home after five years at a school for “crippled” children.  The first day home she begins crying when her mother leaves her to dress herself, as she was used to having help.  Her mother shows her that the clothes have been constructed so that she can do it herself – there are no tricky buttons and the openings are wide enough that she can easily get her legs and arms through them.  At school, she makes friends with Elsje, who recently immigrated from the Netherlands.  Elsje’s brother Pieter has just returned to school after a bout of rheumatic fever and is being teased.  Elsje helps Sally train her new dog, while Sally brings Pieter out of his shell.  The lesson is clear: both new immigrants and people with disabilities will have challenges but they can also make vital contributions to the world around them. 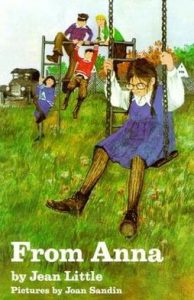 Book cover for From Anna. It depicts a girl sitting along on a swing with a crowd of children playing in the background. (Wikimedia Commons)

From Anna (1972) was her most celebrated book and her most autobiographical book. Anna Solden moves to Canada just before World War II, fleeing the anti-semitism of Germany.  The youngest of four children, she was clumsy and untidy.  Her older siblings are unkind.  Only when the family moves to Canada does a doctor recognize that she can’t see very well and she’s placed in a special sight-saving class in Toronto.  The class changes everything: the pencils are large, the chalkboards are green making them easier to see and the desks lift upwards.   Her classmates are warm and welcoming and face the same challenges.  She flourishes at school but at home she remains quiet.

When Christmas approaches, her older siblings realize that their parents will not be able to give them money to buy gifts as they have in the past.  They each make a plan to make money or craft gifts but tell Anna that she’s no good at making things, but that doesn’t matter as she’s only nine.   Anna shares her disappointment at school, but her teacher decides that they will all make baskets, which had long been seen as a suitable occupation for the blind.  Anna makes a beautiful green basket with gold trim, amazing her parents and siblings.   Her siblings initially refuse to believe that she could have made it herself, but her parents explain that they had all received help with their gifts too.

These are just two of her most celebrated works.  She also wrote a great deal of historical fiction, shaping our students’ understanding of Canadian history.  She wrote extensively about diversity and immigration.  Many of her books feature dogs and the human-animal bond.

Over the course of her career, Little was sometimes derided as a “problem writer” whose books lacked imagination.  Others point out that her stories feature relatively happy, largely middle-class homes.

But as a child who was drawn to historical fiction and realism, I loved her books and after I moved to Guelph I was excited to learn that the University of Guelph archives had her papers.  I was fascinated to learn that Little came from a family of social activists.  Her sister, Pat de Vries, with whom she lived for many years, was a key player in Chalmers Community Services, which provides food, clothing and household items to vulnerable members of the Guelph community.  Her parents had been medical missionaries in Taiwan, where Little was born, and played an active role in welcoming displaced persons to Guelph after the war.  Her mother served on the boards of many local organizations and was selected as “volunteer of the year” in Guelph in 1949.   Little herself was active in Canadian Girls in Training and taught disabled children before taking up a full-time career as a writer.  In a paper published eight years ago, Sydney Kruth and I argued that the emerging politics of citizenship and multiculturalism in Canada in the postwar period had a significant impact on how Jean Little wrote about disability.

Little provided children and their parents meaningful stories about friendship, the importance of giving and the appreciation of difference.  I hope that her work will continue to be read by generations of children to come.

Catherine Carstairs is a professor of History at the University of Guelph.

One thought on “Jean Little: Celebrating Friendship and Kindness”