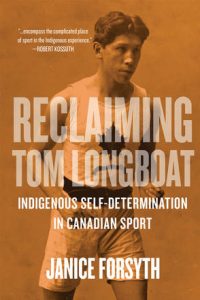 June 4 is Tom Longboat Day, which recognizes the life and career of one of the best distance runners to ever represent Canada. Winner of the 1907 Boston Marathon, Longboat is remembered for both his athletic achievements and innovative training methods. From the Six Nations of the Grand River Reserve near Brantford, ON, Longboat faced racism and prejudice throughout his career, including being called lazy by the press and fellow competitors over his training schedule.

By introducing regular rest into his regime, however, Longboat had a competitive advantage over other runners, who believed that they had to train at maximum effort all the time. He had a better understanding of how to train for long races and, as a result, he was fresher and better prepared than his competitors. This served him well during his career as he was known for his strong finishing sprints.

In 1951, the Tom Longboat Awards were established to recognize Indigenous athletes for outstanding contributions to sport in Canada. In the new book Reclaiming Tom Longboat: Indigenous Self-Determination in Canadian Sport, Janice Forsyth explores the history of the awards and their place within the broader history of Canadian policy and Crown-Indigenous relations. The book looks at how sport has been part of colonization in Canada while at the same time it asks how it can be part of decolonization. Through both oral and textual sources, Professor Forsyth pushes the reader to think critically about sport’s role in Canada while also shedding light on an under-told story in Canadian sport history.

In this episode of the History Slam, I talk with Professor Forsyth about the book. We talk about her experience as a winner of the award, the place of role models in sport, and the use of mainstream sports in colonization. We also talk about sport and culture, the media’s role in telling athletes’ stories, and traditional sport and games and their role in decolonization.