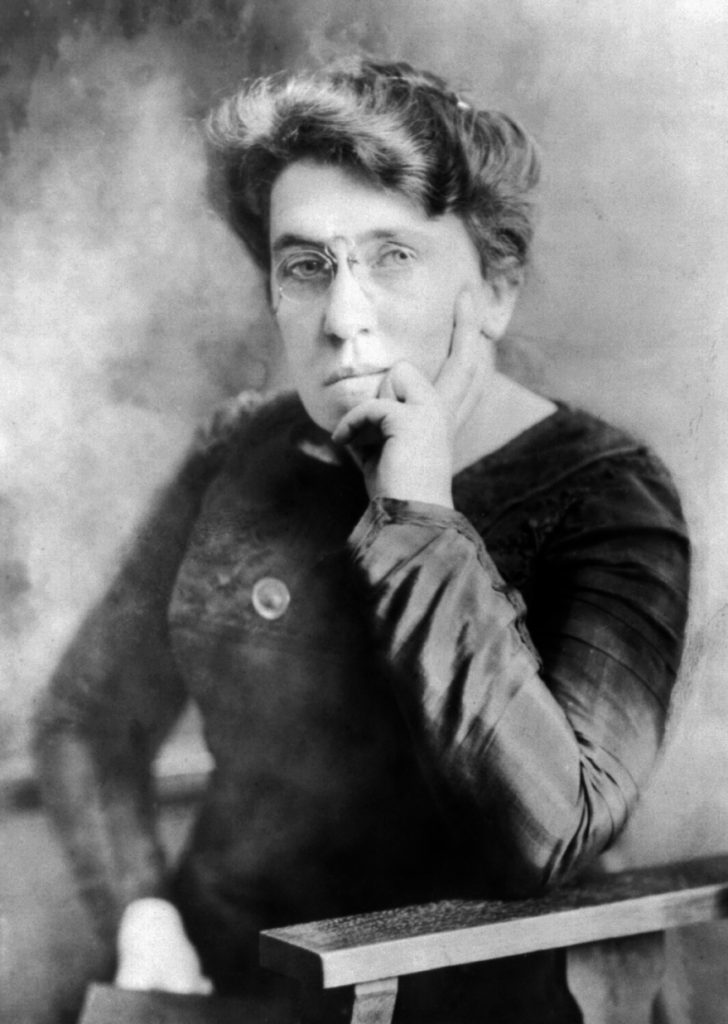 When the pandemic came, Emma Goldman was in a state penitentiary in Jefferson City, Missouri. Goldman and her life-long comrade and fellow revolutionary anarchist, Alexander Berkman, had been arrested under the Selective Service Act of 1917 for conspiring to oppose the draft. Goldman had been reaching audiences of thousands all over the US with her anti-war speeches and organizing. Now, after decades of ceaseless touring advocating anarchist ideas – including in Canadian cities – Goldman was imprisoned and Mother Earth, the journal she founded in 1906 and in whose office she was arrested, was banned along with other periodicals opposed to the First World War and conscription.

Goldman was not isolated in her imprisonment, although she ardently hoped that prison would end what she describes in her classic two-volume memoir, Living My Life (1931), as the “emotional bondage” of her passionate love affair with the politically and sexually mercurial doctor-to-Chicago’s hobos, Ben Reitman. Her friends, family, and admirers supported her with letters, visits, food, and reading material. They remembered her birthday, celebrated tomorrow on June 27. Among Goldman’s admirers while she was in prison was a man she calls Leon Bass in Living My Life; years later, while in exile in Toronto, Goldman would pursue a frustrating affair with the Albany, New York-based anarchist whose real name was Leon Malmed (1881-1956). And many years after that liaison, our research led us to the Toronto home of one of Malmed’s generous descendants and a treasure trove of letters in Yiddish and English that testified to the complex intimacies that bound scattered anarchist outposts to each other. The letters revealed that Malmed was clearly enamored of Goldman well before they began their short-lived affair, but his wife was just as clearly not impressed.

We were on the trail of Malmed as part of our research into Emma Goldman’s exile in Toronto, using her sojourns in the city as a case study for investigating how Goldman has been remembered inter-generationally in the city’s official and popular memory. A wide range of people have invoked Goldman, and in various ways, extending from the anarchist comrades who long outlived her, and on to second-wave feminists, cultural producers, and punk music youth associated with the city’s anarchist space, Who’s Emma? (1996-2001). But Goldman’s fame has often obscured the lives of lesser-known anarchists of her era. Studying her Toronto exile has led us to new understanding of figures such as Malmed, already known to historians of Goldman, but also to anarchist women such as Toronto’s Marie Tiboldo who are largely unknown even to many specialists.[1]

If Goldman’s friends and admirers were generous to her while she was in prison, Goldman was equally generous with the Black and white working-class women who were her co-prisoners, sharing food and comradeship as they engaged in prison labour, making garments for private firms. Then came the pandemic and quarantine; friendly visits were suddenly over. As Goldman describes it in Living My Life: “The influenza epidemic raging through the country had reached our prison, and thirty-five inmates were stricken down. In the absence of any hospital facilities, the patients were kept in their cells, exposing the other inmates to infection.” (668)

Imprisoned people and immigration detainees, then as now, are among those most at risk and most cruelly neglected in an epidemic. Contemporary organizers, including those with experience of imprisonment and/or with providing front-line healthcare to the most stigmatized people, have been asking us to contain COVID-19, not people, and have developed an action agenda. Goldman, who had trained as a nurse and a midwife and had concrete experience with the healthcare needs of New York City’s working-class neighbourhoods, likewise swung into action as the pandemic reached her. She asked the prison doctor if she could work with him to care for those infected. He was willing; the head matron, who thought Goldman enjoyed too much prison liberty, refused. But Goldman prevailed and, when the hard-working nurses were asleep, she made her way around to the cells trying to do what she could to make the infected prisoners more comfortable. In doing so, she was part of an important anarchist tradition of mutual aid.

The current pandemic has renewed practices of mutual aid – or meeting peoples’ survival needs, creating new social relations, and building collective power so central to many radical social movements historically, not just anarchism.[3] The pandemic has called attention to the relationship between civil liberties and public health policy, to the ways in which the enforcement of policies meant to “protect the public” adversely affect those excluded from “the public” or deemed expendable: migrants and undocumented people, those who are incarcerated and detained, people of colour, sex workers, and homeless people, for example.[4] As a pioneering advocate for women’s sexual and bodily autonomy, Goldman would have been furious at the use of COVID-19 to deny safe access to abortion. And as a former sweatshop worker who fought for her whole life against capitalism, she would have completely understood what labour activists today are saying: without understanding the link between poor labour standards and infections in warehouses, logistics, supermarkets, and food processing, we cannot contain this pandemic.[6]

The end of quarantine would come in January, 1919. Goldman was released from prison in September of that year. But release meant deportation for her, not freedom. 1919 also saw a wave of anti-Black pogroms and terror in the United States. Today, Black people and their allies are rising up in the United States, Canada, and around the world protesting police violence and centuries of racism as the orange man in the White House rails against “radical left anarchists.” Along with 248 other “foreign-born radicals,” Goldman was deported to revolutionary Russia from New York City as the first Red Scare began to take hold. Hers was the first political denaturalization of a US citizen. As she was leaving New York City, thousands of rent strikes were being led by immigrant working-class women in Manhattan, Brooklyn, and the Bronx. These, too, were blamed on “foreign agitators.” Ultimately, thousands of people were deported as the state embarked on a coordinated attack on the radical left including the Industrial Workers of the World.[7]

We observed the centenary of Goldman’s deportation last year with a presentation to the Toronto Workers’ History Project – with the granddaughter of one of Emma’s anarchist comrades in attendance while the THWP’s theatre group mounted a production of Craig Heron’s original play, “Emma’s Last Visit,” to a packed Steelworkers Hall. As we told the audience, our project also explores a long-understudied theme: how Goldman’s experience as a political deportee, exile, and self-described “woman without a country” shaped her understanding of race, nation, internationalism, and exile politics. Goldman would not stay long in Russia and, in exile, she lived in Toronto three different times, her right to reside in Canada enabled by a “mobility marriage” to British miner and comrade James Colton in an era when Canadian citizenship was tethered to British subjecthood.

Goldman is an interesting case of a deportee who herself became a tireless anti-deportation campaigner. We consider her work while in Toronto on behalf of anarchist refugees from the Soviet Union and the Spanish Civil War as well as her relentless campaigning for Atillio Bortolotti, the Italian-Canadian anarchist whom she saved from deportation and certain death in fascist Italy. Bortolotti died twenty-five years ago in 1995. He never forgot Goldman, financed a collection of her speeches and writings on the Spanish Civil War, and for decades nurtured generations of anarchists in Detroit-Windsor and Toronto.

Emma Goldman, often called “the world’s most dangerous woman,” died 80 years ago in Toronto, a city where she enacted her feminist and anarchist politics for almost four years. The anniversary of her death, May 14, arrived in the midst of a pandemic, one that led to the postponement of a symposium on Goldman with which we were closely involved. In 1940, Goldman’s comrades were personally devastated by her death, but also constructed and celebrated her as a soldier and martyr of a heroic and humanist struggle, and used her death as a platform for rededication to the cause.[8] Between her death in Toronto 80 years ago and today, a diversity of individuals and groups have remembered Goldman in myriad ways, with many such as Atillio Bortolotti and Marie Tiboldo acting as bridges between earlier and later anarchists in the city. Along with Candace Falk, Goldman’s pre-eminent biographer, we hope that Goldman’s example during the pandemic “will inspire us all to continue to act with each other in solidarity, interdependence and care.”[9]

Franca Iacovetta is a Toronto-based historian and a member of the riseupfeministarchive.ca/ collective.

With thanks to Candace Falk for her input and generosity.