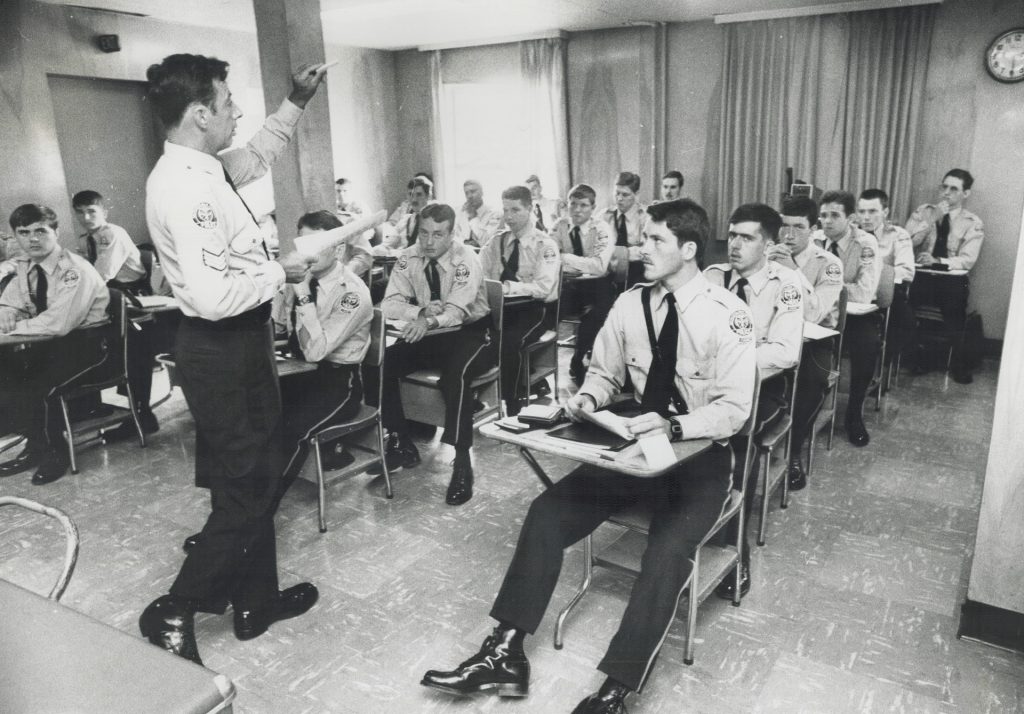 In the early 1970s, to gain insights into the Italian immigrant community in Toronto, the police set up an Ethnic Relations Unit. In 1975 the unit created a “Black Section” followed by Jewish, Southeast Asian, and other sections. The experiment in building bridges to ethnic communities failed because this solution to growing police-community tensions reinforced rather than challenged police assumptions about ethnic and racial differences in the city. The unit blurred the meaning of racial violence; rejected the criticisms of dozens of community leaders, politicians, and civil rights organizations; and reasserted a police position that they, along with “white” Torontonians, were often key victims of the tumult.

Through the 1970s, many Torontonians clamoured for reform in light of discriminatory police violence against LGBTQ, African Canadian, Southeast Asian, and other communities. But police-community tensions persisted through the early 1980s, reaching horrific apogees in the police killings of African Canadians Buddy Evans (1978) and Albert Johnson (1979). By and large the police weren’t listening to community complaints.

The Ethnic Relations Unit may well have been a dinosaur from the outset. In early 1970s multicultural Toronto, the notion that the police had to do outreach to gain insight into longstanding ethnic and racialized communities underlined the growing distance between the police and the people they served. In 1977, the president of Ryerson Polytechnic Institute, Walter Pitman, submitted a report to the Council of Metropolitan Toronto on behalf of the city Task Force on Human Relations. Now is Not too Late urged dramatic change in police conduct to end frictions with Toronto communities.

The report challenged the flawed notion of an Ethnic Relations Unit structured to reinforce, rather than break down, an old Toronto dividing line; a police force still largely made up of officers whose ancestors hailed from the United Kingdom felt it had to reach out through the unit to other Torontonians as though they were foreigners. Not surprisingly, the police rejected the report. Pitman urged an end to a height requirement to join the force, allowing for a potentially greater range of ethnic representation. Police Commission Chair Phil Givens called the change unnecessary. Pitman argued that police irritated South Asian Torontonians at every opportunity. Givens took offense. Pitman noted that officers were seen as less hesitant to use force against African Canadians. Givens saw lies promoted by police critics in the media. Givens railed at the report recommendation that the province establish a review board to handle community complaints. “Civilians will be like Monday morning quarterbacks,” he thundered in early 1978, “second guessing what the police should have done on Saturday night.” He decried Pitman’s supposed evidence of police prejudice: “I wouldn’t hang a dog on evidence like that.”

The Ethnic Relations Unit in Action

Ten years on, in 1982, the unit had only twenty-two officers, chosen for their ethnic and cultural diversity and speaking thirteen different languages. Rather than integrate the force on a model recommended by the Pitman report, the unit offered up an ineffectual balm. Unit officers were sometimes deployed to other branches of the force to help find ways to bridge community-police divides (though how they might have done so was never clear). They held meetings to listen to communities voice concerns. But the most important job of the unit was to investigate so-called racial incidents. The unit defined these incidents superficially by two factors — attacks based on skin colour and racial slurs. In 1982, the two most victimized groups, according to unit data, were “East Indians” and “whites (not including Jewish).”

The product of a police force dismissive of outside advice, at best, the Ethnic Relations Unit flailed about unable to grasp the challenges of policing a rapidly diversifying city. At worst, its approach reflected the institutional biases critics had long signalled.

The unit presented as informed. But it was invariably befuddled by the communities it served. In November 1982, for example, warned of possible violence at a “Sikh demonstration” at the consulate of India, the unit sent two officers. When some demonstrators protesting Indian government brutality in the Punjab region turned violent, the officers didn’t understand what was happening. In a melee that unfolded, one officer was struck on the head. At the 1983 trial of two men charged with the attempted murder of the officer, the lawyer Alan Gold asked the injured constable, Christopher Fernandez, a set of questions to test his understanding of the Sikh community dynamics that had formed the backdrop to the violence. Fernandez had no idea what Gold was talking about or what had happened at the protest to generate conflict. Even so, the unit later reported that liaisons between unit members and Toronto’s various ethnic communities would greatly reduce the chances of clashes such as the one at the Indian Consulate. In fact, there is no evidence of unit success in this area.

The Sikh demonstration showed an Ethnic Relations Unit at sea as far as how Toronto communities functioned politically, socially, religiously and culturally. In addition, other unit activities reflected an institutional insistence that Pitman had been wrong. The unit reflected a sense on the force that race related violence was often the fault of immigrants persisting in longstanding, poorly understood battles held over from their places of origin. This dovetails with the discriminatory police dismissal in the 1970s of unsolved killings of Gay men as so-called “homosexual murders.” Often these investigations faltered on the false assumption that such killings were a lovers’ quarrel gone wrong.

There was no scrutiny of accusations of police racism. In 1982, the unit commander, Staff Sergeant F. Dean Audley reported that the unit had been saturated with allegations from African-Canadians of police harassment, brutality and racist treatment. Audley worried at the impact on police-community relations such allegations might have, that the force should reply to the concerns, and that racial unrest might follow should the allegations remain unanswered. However, he noted that it was not the function of the unit to investigate complaints against officers. Without further explanation, he argued further that the majority of the allegations had been found to be false or inaccurate.

The unit finding that racially motivated violence was often directed at “white” Torontonians further reflected a poor understanding race and conflict in the city.

Those who constituted “whites” were never clear. Jews and Italian Canadians were sometimes, but not always white. “Greeks” and “Greek immigrants” appear in reports in a manner that raises questions about whether there was a difference between the two. There was a discriminatory assumption that a constable from a particular ethnic community would be inherently able to resolve problems in a neighbourhood of their own ethnicity. However, Chris Fernandez, the officer sent to the 1982 consulate of India protest, and injured, was what the unit described as “Hispanic.” Because unit reports were clinically brief and devoid of both detail and insight into community context for attacks, many cases suggest the possibility that there’s much more to the story that the police had no interest in understanding. A January 1983 report, for example, described a white man who drove his car purposely into three “Italian youths.” After missing them, he left his car, approached them with a weapon, and shouted racial slurs. Here as elsewhere, the terms “racial” and “ethnic” were used interchangeably.

Perhaps the greatest tragedy revealed by unit reports is the frequency of a common narrative for which the police had neither insights nor answers. From a peaceful neighbourhood setting, many reports tersely charted an encounter that led almost instantly to brutality where it’s almost always impossible to understand what precisely moved an attacker from hatred to acute racist violence. In January 1982, an African Canadian woman was unloading groceries from her car. A white man approached, forced her down, and began to choke her. After a struggle, the victim honked her horn at which point the man fled. The man had told bystanders that he was glad he “got” an African Canadian (a racial epithet was used here). In February 1983, an eleven year old East Indian girl walking toward a bus stop was blocked by a teenage African Canadian girl who shouted racist insults. The eleven year old was then kicked to the ground. In May 1983, an African Canadian woman using a pay telephone in a hospital lobby was interrupted by a white man who said he wanted to use it. As she pointed in the direction of other phones available, the man punched her in the face while making racial slurs. Reports of such attacks are unrelentingly distressing and while most led to the arrest of the culprit, the unit never moved past solving a case of racially motivated assault in order to improve relations with Toronto communities, probe police or neighbourhood racism, or understand racial violence in city communities.