Without any doubt, Duncan Campbell Scott, Deputy Superintendent General of the Department of Indian Affairs from 1913 to 1932, was Canada’s best-known Indian Affairs civil servant. His views of Indigenous peoples were often intolerant and harsh, and he believed “the happiest future for the Indian is absorption into the general population.”[1] Though much has been written about Duncan’s career and writings, we know little about his childhood and how his upbringing shaped his views and career ambitions.

Historical digging has revealed an interesting link between Duncan’s hard line on Indigenous issues and his father, Rev. William Scott (1812?-1891). In 1883, Rev. Scott wrote an in-depth report on the Mohawk land struggle at Kanehsatake/Oka that reveals his inability to see the power and strength of Indigenous peoples and the land. The document reveals the Methodist minister’s fluency as a writer, his ability to master and organize a great deal of material, his knowledge of French, and his total and unconditional support of the newly-established Department of Indian Affairs, a department his son would go on to lead only twenty years later. Rev. Scott’s report is available online (William Scott, Report Relating to the Affairs of the Oka Indians. Made to the Superintendent General of Indian Affairs (Ottawa: Printed by MacLean, Roger & Co., 1883) and it deserves greater historical attention, as does the life of its author. 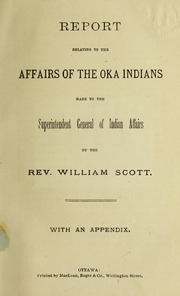 The Scott Family and Indian Affairs

On 2 August 1862, Duncan Campbell Scott was born in the Methodist parsonage at the corner of Metcalfe and Queen in Ottawa, Ontario across from the Dominion Methodist Church where his English-born father served as minister. In the 1840s, Rev. William Scott started his ministry with Anishinabeg (Ojibwe) in southwestern Canada West (Ontario as it became with Confederation). He knew several prominent Mississauga of the era including Rev. Peter Jones or Kahkewaquonaby (“Sacred Feathers”). In 1847, Rev. Scott and the respected Mississauga chief approached Lord Elgin, the Governor General of Canada, to help establish an Indian industrial boarding school at Muncey, thirty kilometres of southwest of London.[2] The year before, thirty Indigenous leaders and about eighty Indigenous men met with government officials to discuss the building of industrial boarding schools. The majority requested these schools in which their young people could learn the skills necessary to participate economically with the Euro-Canadian population on terms of equality.

In the belief that Indigenous Christians would soon control these institutions, most of the chiefs present at the July 1846 conference at Orillia, near Lake Simcoe, north of Toronto, committed to donate one-quarter of their communities’ annuities (annual payments for the sale of their lands) to support them.[3] The Mount Elgin Industrial Institute at Muncey formally opened in 1851, but was not operated as the Indigenous peoples had hoped and anticipated. As local control did not follow, many Indigenous People soon came to regret their initial support for these institutions. Rev. Scott had left mission work by this point to serve Euro-Canadian Methodist congregations throughout eastern Ontario and western Quebec from the 1850s to 1870s.  Following the death of his first wife, in 1859, the minister re-married Canadian-born Isabella Campbell MacCallum, whose parents were Gaelic-speaking Highlanders, emigrant settlers from Killin in Perthshire.[4] Their young son, Duncan, was Ottawa-born, but grew up in small towns and villages in rural Ontario and the Eastern Townships of Quebec.

Duncan’s literary ability indicates an early introduction to his well-read father’s library of standard classics.[5] It is known that Duncan’s mother introduced him to the piano at age seven,[6] which led to his life-long passion for classical music. Apart from the evidence of his early exposure to literature, and his love of music, our knowledge of Duncan’s boyhood is limited, apart from the fact that he had an interest in medicine. Scott’s maternal uncle, Dr. Duncan MacCallum, taught medicine at McGill. As a young man Duncan wanted to become a medical doctor, but his family could not financially assist. After he left Stanstead Wesleyan College in Quebec’s Eastern Townships, the young man decided to pursue a public service career, which would offer financial security and time for other interests. Through his father’s political contacts, the seventeen-year-old had an insider’s advantage.

When government offices came open a century and half ago friends of the ruling party usually obtained them.[7] In December 1879, Scott the younger obtained a junior copy clerk’s job thanks to his father’s close friendship with none other than John A. Macdonald. The prime minister acted upon a letter from Conservative M.P. Charles Colby, a political ally in the Eastern Townships, who wrote; “You desired to be reminded after the Session of your intention and promise to provide a good permanent situation for Duncan Campbell Scott, son of your clerical and political friend and admirer Rev Wm Scott now of Durham Prov of Que.”[8]  On 8 October 1880, Duncan’s appointment became permanent in the newly created Department of Indian Affairs in whose ranks he served over half a century.

Rev. William Scott and the Report Relating to the Affairs of the Oka Indians

After his retirement from the Methodist ministry, Rev. Scott, whose financial situation remained unstable,[9] received assignments from the federal government, one being of particular long-term significance. In the early 1880s, he obtained a major assignment to prepare a detailed report on the disputed Mohawk land at Oka about fifty kilometres northwest of Montreal.[10] The controversy dated back to the eighteenth century when the original seigneurial grant was made to the Sulpicians, a Roman Catholic religious order, at the Lake of Two Mountains, where the Ottawa River meets the St. Lawrence. Rev. Scott completed his Report Relating to the Affairs of the Oka Indians in 1883. The key issue concerned whether the Mohawks or the Sulpician Brotherhood had the right to the land. As Duncan Campbell Scott’s father correctly summarized: “The French regarded themselves as proprietors of the soil by right of discovery. The Indians, for the most part considered the French as invaders and intruders.”[11]

Determined to convert the Indigenous population to Christianity, the French entrusted the task to Roman Catholic religious orders. The French monarch vested ownership of the Lake of Two Mountains seigneury in the name of the Sulpician Order. After the Conquest, the British accepted the Sulpicians’ claim, as King George III’s Royal Proclamation of 1763 clearly exempted the St. Lawrence Valley. A British Ordinance of 1840 also confirmed the Sulpicians’ title. The Mohawk at the Lake of Two Mountains (Kanehsatake or Oka) categorically refused to accept this decision. Had not their ancestors hunted and farmed on this land for generations?

In protest many Mohawks left the Roman Catholic Church in the late 1860s. In a massive conversion to Protestantism they joined the Methodists.[12] Remarkably, Rev. Scott sided in his report with the Gentlemen of the Seminary of St. Sulpice, and defended his federal government employers, who had already pronounced in favour of the priests, categorically declaring that they owned the land.

The ordained Methodist minister endorsed the Sulpicians’ recommendation, as did the Department of Indian Affairs, that the Mohawks relocate from Oka to a new location in Muskoka in Ontario. As he wrote on page 52 of his Report, “The Department of Indian Affairs has devoted more time and care in the consideration of the condition of the Okas, and the regulation of matters for their advantage, than to any other single tribe or band in Canada.” Later on page 63 Rev. Scott stated his full paternalistic message: “The department endeavours to accomplish what is best for you.” But only about one-third of the community agreed to leave. The majority remained defiantly at Oka or Kanehsatake.

Rev. Scott’s report established a position that subsequent governments supported and defended. In 1912, the Judicial Committee of the Privy Council in London, the supreme legal body in the British Empire, ruled, in the spirit of Rev. William Scott’s report, that the land belonged to the Seminary. The following year the younger Scott, after over thirty years of climbing up the bureaucratic ladder, became the Deputy Superintendent General, or deputy minister of the Department of Indian Affairs, from 1913 to 1932, and defended his father’s position.

Nearly sixty years after Duncan Campbell Scott’s retirement, and thirty years ago this summer, the land struggle at the Lake of Two Mountains dramatically returned, resulting in the so-called Oka Crisis of 1990.The 78-day standoff in the summer of 1990 between Mohawk land defenders, Quebec police and some 2500 Canadian military is the subject of a fine contemporary study by journalists Geoffrey York and Loreen Pindera, People of the Pines: The Warriors and the Legacy of Oka (Toronto: Little, Brown & Company, 1991).

Donald B. Smith is a Professor Emeritus of History at the University of Calgary. He includes a full chapter on Duncan Campbell Scott in his forthcoming study, Seen But Not Seen: Influential Canadians and the First Nations from the 1840s to Today, scheduled for publication in late 2020 by the University of Toronto Press.

[2] “Industrial Schools at Alderville and Mount Elgin,” in Report of the Special Commissioners Appointed on the 8th of September, 1856, to Investigate Indian Affairs in Canada (Toronto: Queen’s Printer, 1858), not paginated.

[4] The memoir by E.K. Brown, “Duncan Campbell Scott: A Memoir,” Responses and Evaluations. Essays on Canada (Toronto: McClelland and Stewart, 1977), is the best source on Scott’s background and youth.

[10] Stan Dragland provides a spirited account of the investigation in his Floating Voice and the Literature of Treaty 9 (Toronto: Anansi, 1994), 76–79.