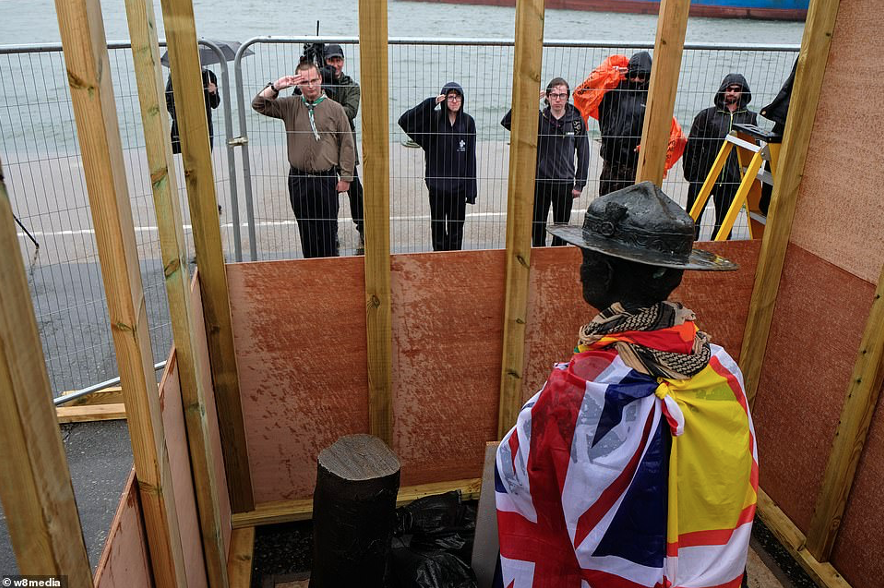 Members of the Scout movement salute Baden-Powell as the statue was boarded up. 12 June 2020. Credit, Daily Mail and w8media (Used without permission)

2020 has been intense. Living in lockdown, uncertain about the future, watching the body count from Covid-19 and police violence continue to rise. Time, shaped by anger, grief, and fear, moves differently, as the pandemic – like other disease outbreaks before it – exposes and deepens socio-economic divisions and inequalities. Despite the best efforts of conservative politicians and social commentators, it is no longer possible to deny or ignore the fact that racist violence and dispossession are at the core of national histories and still shape social relations and institutions in the twenty-first century.

The relationship between past and present looms particularly large in public consciousness just now, and we are writing as historians – one Indigenous (McCallum) and one settler (Alexander) – whose lives and careers have been shaped by the legacies of British imperialism and Canadian settler colonialism. In quarantine, while grappling with changed domestic and work routines and worrying about loved ones, we read the news. Headlines blend into one another: infection and unemployment rates, racist attacks and anti-racist protests, and the creeping spread of authoritarianism in Western democracies. Significantly for us, there are also stories – a new one every day it seems, about increasingly fractious disagreements regarding what to do with statues of “great men.” This week, we explore issues around commemoration, rights and the pandemic beginning with this post on the life and work of Lord Robert Baden-Powell and recent debates about how he should be remembered, and commemorated.

On 7 June 2020, less than two weeks after George Floyd was murdered in Minneapolis by a white police officer, British Black Lives Matter protestors threw a statue of seventeenth-century English slave-trader Edward Colston into Bristol Harbour. On the 4th of July, U.S. President Donald Trump stood at the foot of Mount Rushmore – a monument to violence and dispossession on stolen Lakota land[i] – and warned of the “growing danger of…a merciless campaign to wipe out our history, defame our heroes, erase our values, and indoctrinate our children.” Equating the dismantling of monuments with “cancel culture” and  “far-left fascism,” he promised to “deploy…federal law enforcement to protect our monuments, arrest the rioters, and prosecute offenders to the fullest extent of the law.”[ii]

More recently, on October 9th (“Columbus Day”), Trump – himself infected with Covid-19 – released a proclamation condemning the so-called “radical activists” who, he claimed, were out “to undermine Christopher Columbus’s legacy.”[iii] The 45th President – thinking, no doubt, of the federal election that was then less than a month away – repeated his intention to mete out harsh punishments to “extremists” who vandalize historical monuments. He listed a number of the Executive Orders he had signed since July 2020 mandating (for example) the creation of a “National Garden of American Heroes” and denouncing critical analyses of United States history that centre race- and gender-based oppression. Trump has explicitly linked what he calls “left-wing rioting and mayhem” to history education, bemoaning for example the use of “propaganda tracts, like those of Howard Zinn…to make students ashamed of their own history” and singling out the New York Times’ 1619 Project (an initiative which centres the impact of slavery in US history and earned creator Nikole Hannah-Jones the 2020 Pulitzer Prize for Commentary) as a jumble of “deceptions, falsehoods, and lies” that “rewrites American history to teach our children that we were founded on the principle of oppression, not freedom.”[iv]

While our current moment of reckoning has given these “statue wars” a new sense of urgency and potential violence, it’s important to point out that battles over memorial structures have been ongoing for years. The prominent Montreal statue of Sir John A. Macdonald, Canada’s first prime minister and an architect of its genocidal Indian Residential School system, that was toppled this summer had been repeatedly vandalized over the past few years, for example.  Further, it was public debate about the fate of a monument celebrating Confederate General Robert E. Lee that sparked violent clashes between white supremacists and counter-protesters in Charlottesville, Virginia, in August 2017. All of this is in addition to #rhodesmustfall, the ongoing campaign to remove likenesses of Victorian imperialist Cecil Rhodes from postsecondary institutions, which spread from the University of Cape Town in 2015 to the University of Oxford (where, despite ongoing petitions and protests, his statue remains in its central position at Oriel College). These monuments, like other conservative forms of commemoration and national history-writing, assert narratives of freedom and progress that obscure and deny the violence of slavery, capitalism, white supremacy, and settler colonialism and ongoing inequities they created and fostered.

Our primary focus in this week’s three-part series is a statue of a different historical figure – one who may, at first glance, appear to be less controversial than Macdonald, Lee, Colston, and Rhodes: Lord Robert Baden-Powell (1857–1941), the English founder of the Boy Scout and Girl Guide movements. The life-sized sculpture of Baden-Powell, erected just thirteen years ago through efforts of local Scout councils, individuals, and businesses, sits near the harbour in the town of Poole, in the English county of Dorset. The monument looks out to Brownsea Island, a picturesque place known for its unusual red squirrels and – more significantly – the site of “BP’s” first-ever camp for boys, which he organized in 1907 on the eve of his retirement from the British army. Characterized by uniforms, badges, and a pedagogical promise that combined autonomy and adventure with respect for elders and international friendship, Scouting and Guiding have become one of the most popular global youth movements, enrolling millions of young members in countries around the British Commonwealth and the world over the past century.

After the fall of the Colston statue in Bristol, a group of activists established “Topple the Racists,” a website and crowd-sourced digital map of British monuments “that celebrate slavery and racism.” To the astonishment of some, the website’s list of monuments to be targeted included the Baden-Powell statue in Poole. Police in Dorset feared it might become a target for vandalism, and the Bournemouth, Christchurch and Poole (BCP) Council responded by declaring that the statue would be temporarily removed. Press coverage of this announcement focused on Baden-Powell’s alleged fascist sympathies, and, in particular, on recently declassified MI5 (UK domestic counter-intelligence and security service) documents about his exchanges with Nazi officials and the head of the Hitler Youth movement.[v]

Immediately after the BCP Council’s announcement, a group of white protestors surrounded the statue of Baden-Powell and shrouded it with the Union Jack. They camped out beside it – in effect acting as a 24-hour security team (bearing signs with slogans like “British History Matters”) – and organized a petition with more than 36,000 signatures arguing that the statue needed to stay put. Their actions had a near-immediate effect, and the Council decided that the statue of the “Chief Scout” – like one of Winston Churchill in London’s Parliament Square that was spray-painted with the words “Was a Racist” in June 2020 – would be boarded up temporarily instead of being removed.

While one of us has written elsewhere about the similarities and links between the Girl Guide movement and European fascist youth groups,[vi] Baden-Powell’s connections with European fascism are not our sole interest here. In fact, the singular focus on Baden-Powell and fascism in discussions of the monument in Poole works to obscure his life-long investment in colonialism and the often-violent hierarchies of empire. In this we agree with British historian Charlotte Lydia Riley, who – while noting that there are far more monuments celebrating perpetrators of slavery, genocide, and colonialist violence than there are critically engaged conversations about empire – recently insisted that Britain’s “relationship to its imperial history is built more on erasure and forgetting than on remembering – it is a series of silences from the past.”

Such silences also characterize popular perceptions of Baden-Powell, a man who often described himself as having lived “two lives.” BP’s first life, less well-known today, was a Victorian existence characterized by militarism, violence, and expansionist imperialism. After completing his formal education at the English public school Charterhouse, Baden-Powell joined a British cavalry unit in India as a junior officer in 1876, at the age of nineteen. His imperial military career spanned a period of thirty-five years, during which he fought against native troops in the Second Anglo-Afghan War (1878) as well as in Zululand (1888), Ashantiland (1895) and Matabeleland (1896). Like Garnet Wolseley, who fought the Ashanti in Africa and the Métis in what is now Manitoba, Canada, Baden-Powell’s military career and reputation were based on the violent suppression of native resistance in different parts of the British Empire. The Scout leader’s first, martial life culminated during the Second Boer or South African War (1899–1902) and the so-called Siege of Mafeking (1899–1900). He was widely celebrated as a war hero for his actions in Mafeking, where he had established a cadet corps of white boys that later inspired numerous aspects of the Scouts. At the same time, however, Baden-Powell ordered starving black Africans to be executed by firing squad for stealing food, and had dozens of others flogged.[vii] As Amanda Nettlebeck has recently written, flogging was a particularly racialized form of punishment, used in British imperial contexts as a “means of regulating black subjects and as a symbolic marker of white sovereignty.”[viii]

The first Boy Scout camp on Brownsea Island, held five years after the end of the war in South Africa, provided a dramatic narrative turning point for the Chief Scout. Leaving behind the violence and racial hierarchies of his so-called first life, Baden-Powell described himself from that point on as a “man of peace,” who – as the aging and benevolent patriarch of the youth movements he founded – promoted international friendship and familial tolerance among young people across the British Empire and the world.[ix] Looking more closely at the history of Scouting and Guiding, however, reveals that the divide between colonialist violence, fascist discipline, and peaceful pedagogy was not quite as stark as Baden-Powell and his supporters would have us believe.

[i] Nick Estes, Our History is the Future: Standing Rock Versus the Dakota Access Pipeline (Verso, 2019).