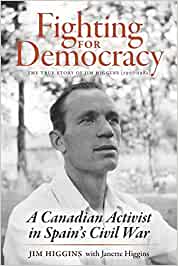 In 1937, following the outbreak of the Spanish Civil War, the Mackenzie King government passed the Foreign Enlistment Act. Like other western democratic countries, Canada had decided to stay out the war, which saw the democratically-elected Republican government fight against the Francisco Franco-led Nationalists. Despite the law, over 1,600 Canadians went to Spain to fight alongside the Spanish Army against Franco. Known as the Mackenzie-Papineau Battalion, their stories have not been included in much of Canada’s military history – Canadian casualties from the war are not included in the Book of Remembrance, for instance, as Canada wasn’t officially in the war. There has been some work done, including a memorial in Ottawa, but for the most part, the motivations and actions of these individuals can be difficult to discern.

In 1980, Manuel Alvarez, a boy whose life had been saved by a Canadian during the bombing of Corbera d’Ebre wrote The Tall Soldier to pay tribute. The book provided some unique insights into the conflict while also telling a touching story about one of the Canadians who had traveled to Spain to participate in the war. That man was Jim Higgins and when the two finally met, it made headlines around the world.

Jim Higgins was English-born and came to Canada in the late 1920s, worked as a carpenter in Regina, participated in the Regina Riot, and, as an active member of the workers rights movement, received plenty of attention from the RCMP. Compelled to fight for democracy and freedom, he traveled to Spain in 1937, but, like so many members of the Mackenzie-Papineau Battalion, never really talked about his experience. Around the same time as Alvarez’s book came out, Higgins’ children were pushing him to write his story.

That story has now been published as Fighting for Democracy: The True Story of Jim Higgins (1907-1982), a Canadian Activist in Spain’s Civil War. Compiled by his daughter Janette Higgins, the book provides a riveting account of a oft-forgotten chapter in Canadian history. Higgins’ conviction to the cause is compellingly outlined as he tells his story. And if sharing his story wasn’t enough, Jim continues the fight for what he believes in as all the proceeds from the book will be donated to causes that were important to him.

In this episode of the History Slam, I talk with Janette Higgins about the book. We talk about her father’s childhood, his decision to come to Canada, and his participation in the Regina Riot. We also talk about Mackenzie-Papineau Battalion in the Spanish Civil War, Jim’s role in the war, his meeting with Manuel Alvarez, and the legacy of the Spanish Civil War in Canada.