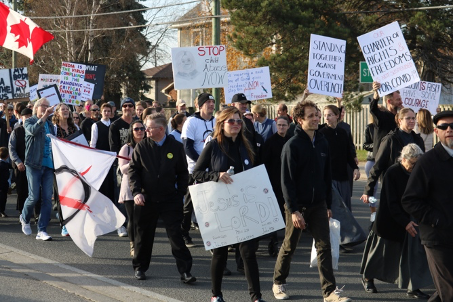 COVID-19 and the steps taken to inhibit its spread have inspired significant opposition across Canada over the past ten months. Protestors have rallied against measures implemented by provincial governments, and movements such as The Line Canada and March to Unmask have used public demonstrations and social media platforms to denounce mandatory mask-wearing, quarantine procedures, travel restrictions, and lockdown orders. Many Canadians link this opposition, and the anti-mask and anti-lockdown protests in particular, to either right wing conspiracies, a rejection of medical science, or self-centered individualism. Headlines such as “Anti-mask protestors, conspiracy theorists march through downtown Vancouver” or “How right-wing extremists, libertarians and evangelicals built Quebec’s movement against COVID-19 restrictions” highlight how media coverage reinforces the connection between these protests and forms of extremism. Often, these are portrayed as a more American response to the crisis than a proper Canadian one.[1]

It is important to understand, however, that resistance to mandatory public health initiatives has a long history in Canada. Compulsory measures to limit the spread of disease, including quarantine acts and vaccination campaigns, can be traced back to the late-18th and early-19th centuries. Discoveries in medical science by the late-19th century transformed understandings of infectious disease, leading to new ideas around prevention and containment and, as public health acts in Canada were strengthened, governments gained broader legislative powers to respond to the presence of infectious disease in the community. Since that time, these powers have been the target of popular opposition, and government measures to contain disease have been viewed by the public with varying levels of skepticism and mistrust.[2]

While much of this opposition has been rooted in a rejection of the science or fear of negative health effects, the grounds upon which Canadians have resisted mandatory public health measures have varied. The first anti-vaccination leagues, established in the 1870s, not only raised concerns over the safety of vaccines and doubts as to whether vaccine-immunity had been adequately demonstrated, but members also argued that the compulsory nature of vaccines was a violation of parental rights, or that vaccination orders were a tool used by governments to exert control over working classes. During the 1918-19 influenza pandemic, the readiness of citizens to comply with legislative restrictions (which varied across the country and included closures, quarantining, compulsory wearing of masks in public, and some vaccination campaigns) depended on how individuals viewed the relative necessity or effectiveness of these disease control measures, which some argued perpetuated discrimination and injustice.[3] Several scholars have demonstrated the popular support for opposition to compulsory immunization campaigns in the twentieth century (from smallpox to influenza to measles), illustrating that while this opposition was often formulated around medical arguments, citizens also raised philosophical concerns about violations of personal liberties, bodily rights, parental rights, or the differing socioeconomic impact of the campaigns.[4]

What these historical studies make clear is that tensions over who has the right to determine the appropriateness of mandatory public health measures have always been present in Canada. Thus, situating the current opposition to COVID-19 restrictions into this history not only provides important context for current debates, it adds to our understanding of the changing (and conflicting) understandings of the relationship between individuals, families, the state, and “public interest” in Canadian society.

For those interested in Canada’s human rights history, protests against government measures to curb the spread of disease also provide a particularly rich area of study because they highlight how state and society have historically dealt with competing human rights. When it comes to infectious disease, the provision of public health care is an area in which individual liberties – especially the rights of individual citizens to determine the scope and method of their own medical treatment, or that of their children – have historically been in conflict with ideas around the collective good. Analysis of these conflicts over time reveal the growing power of a rights-based discourse in Canada.

One of the effects of human rights activism and the expansion of provincial and federal human rights law throughout the twentieth century has been the growth and increased mobilization of a human rights discourse in Canada. Well before, but certainly since, the adoption of the Charter of Rights and Freedoms in 1982, individuals and groups (sometimes on both sides of an issue) have appealed to human rights in order to legitimize their claims or demands. This form of rights-arguments has been used effectively in certain campaigns against compulsory health initiatives. Heather MacDougall and Laurence Monnais’ study of parental responses to mandatory measles vaccinations for school children demonstrates how the entrenchment of the Charter, along with international legal developments, strengthened individual and parental rights, and brought a new focus on individual children’s rights relating to medical treatment.[5] The limited cases in which public health powers have been adjudicated before the Canadian courts, however, do show a judicial deference to the government, with Supreme Court jurisprudence supporting the idea that a violation of rights may be considered reasonable (under Section 1 of the Charter) in times of emergency.[6] In 2002, for instance, an Ontario court approved the detainment, physical restraint, and forced treatment of an individual infected with tuberculosis, concluding that the violation of his Charter rights was justified to protect public health and prevent the spread of the disease (Toronto v. Deakin).

While many Canadians support such decisions, the widespread restrictions in response to COVID-19 test this support. Opponents to the restrictions have used the rights discourse to justify their position. The Justice Centre for Constitutional Freedom, a Canadian legal advocacy group, argues that mandatory mask wearing requirements “represent an interference with personal autonomy.” This organization is very specific in its charges – that mandatory mask wearing policies are an “unjustifiable violation of sections 7 and 15 of the Canadian Charter of Rights and Freedoms, namely the rights to liberty, security of the person, and equality.”[7] Last June, the Ontario Civil Liberties Association wrote to the World Health Organization opposing the mandatory use of face masks stating, “In a free and democratic society, the individual has a presumed right to make their own evaluation of personal risk when acting in the world. It is an unjustified authoritarian imposition, and a fundamental indignity, to have the State impose its evaluation of risk on the individual.”[8]

Many of those responsible for the recent anti-mask or anti-lockdown demonstrations use a similar language, tapping into the rights-based argument to assert that these measures attack the fundamental rights they are guaranteed by the constitution. Controversial Pastor Henry Hildebrandt of the Church of God in Aylmer argues that the current pandemic measures infringe the church’s freedom of peaceful assembly. The Line Canada presents itself as a civil liberties organization, “fighting for freedom in Canada.”[9] Protestors chant “liberté” or “freedom over fear.” Others hold signs that read “my body, my choice,” igniting debates over contradictions within the movement.

Dismissing all of these protestors as right wing conspiracists or “nut jobs” can obscure the long history of opposition to mandatory public health measures in Canada. It also prevents us from understanding the many motives behind their opposition, including different understandings of rights and freedoms, or of the limits of governments to interfere in the lives of citizens in the name of “public good.” We may not agree with these motives. We may find them selfish or even dangerous. But if we ignore the arguments they are making, then we fail to recognize the very real tensions that exist within our current human rights system. Moreover, examining the rhetoric used in the protests over the responses to COVID-19 in light of our history of opposition to compulsory public health measures reveal how central the rights-discourse has become to these movements. Placing this into the broader study of resistance and activism in Canada can help us to understand, and to be more critical of, the growing influence and varied use of human rights as a tool in popular discourse.

Jennifer Tunnicliffe is an Assistant Professor in the Department of History at Ryerson University. She is the author of Resisting Rights: Canada and the International Bill of Rights, 1947–1976 (UBC Press, 2019).

[1] For example, an article in The Conversation argued that although Canada’s general response to COVID-19 stood “in sharp contrast to the situation in the United States” the resemblance between anti-mask protests in cities such as Montreal and those in the US was a warning that Canada was “not immune” to the American-style response.

[6] Lorian Hardcastle, “The Effects of COVID-19 on the Health System: Legal and Ethical Tensions Part I,” University of Calgary Faculty of Law, available online at https://ablawg.ca/2020/04/06/the-effects-of-covid-19-on-the-health-system-legal-and-ethical-tensions-part-i/