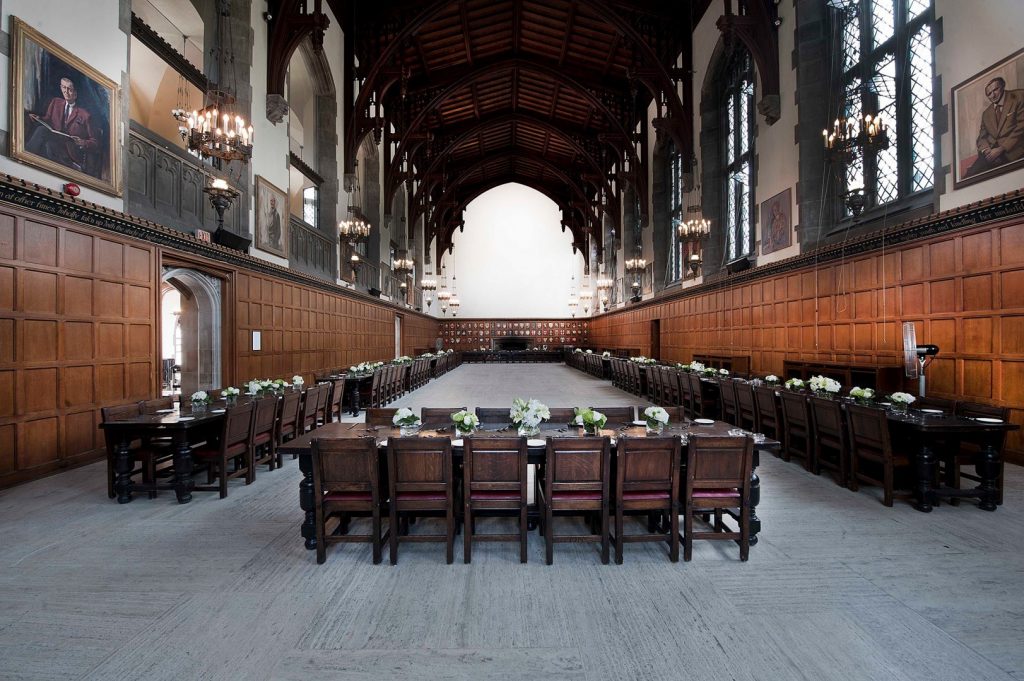 The Great Hall at Hart House, University of Toronto. Photo used with permission of Hart House. In 1952, Canadian historian Donald Creighton took “a room at Hart House” so that he could finish a book. See Donald Wright, Donald Creighton: A Life in History (Toronto: University of Toronto Press, 2015), 187. Notably, Hart House did not allow women entry into its building, except on special occasions, until 1972. This exclusion honoured the stipulation of Hart House’s founding donor, Vincent Massey. See https://harthouse.ca/blog/40-years-of-women-at-hart-house.

In this three-part series, Dr. Donica Belisle of the University of Regina suggests that by expanding the ways students’ work is assessed, it is possible to expand the practice of History itself. By way of example, she explores the results of a recent experiment in which she assigned undergraduate students a “research creation” option. She concludes that despite the difficulties inherent to such an assignment, it is important to enable the inclusion of visual, audio, literary, dramatic, and other elements within scholarly communication. This series has been cross-posted with the CHA’s teaching blog.

WHEN IT comes to scholarly dissemination, academic writing remains the gold standard. Through academic writing – by which I mean formal prose based on deep reflection, presented in a linear way and with clear citations – scholars communicate complex thoughts and findings.

But is scholarly writing the only method of dissemination by which historians should assess students’ work?

Within the field of history particularly, it is well recognized that scholarly writing – replete with footnotes, third-person prose, and an ‘objective eye’ – is itself a product of long and exclusionary processes. Particularly, and as Bonnie Smith, Mary Jane Logan McCallum, Donald Wright, and many others indicate, the academic discipline of History itself emerged at the turn of the 20th century via a complicated process of professionalization, one that sought to elevate certain voices through the exclusion of many others. These striving voices held high the values that were also attributed to liberal citizenship itself: rationality, objectivity, empiricism, and, more subtly, a commitment to nation building.

The notion that it was possible to discern and communicate the past via careful research had value. Yet in the process of elevating the ideals of empiricism, objectivity, and paper-based research in archives, particularly, it also became clear that many scholars also associated rationality, objectivity, and citizenship with white masculinity. That is, just as the ideal citizen at this time was framed as white, genteel, and male, so was the ideal historian. In tome after tome, and in seminar after seminar, the true historian was one who constructed narratives of state achievement. Such narratives, in turn, were effaced of all hints of subjectivity, passion, or story-telling. They were, in a word, dry.

Nonetheless, it is also true that the most popular of these tomes, such as Donald Creighton’s books on the history of Canada, were also often highly romanticized. Even the title of Creighton’s biography of John A. MacDonald speaks to the theatrical elements in his works. Making reference to the drama inherent in one’s coming of age, it is called John A. MacDonald: The Young Politician, The Old Chieftan (1952).

Despite the narrativity within even the most well-respected of contributions, historians in much of mid-20th-century English Canada taught their students to be dispassionate because to be otherwise would be unscientific. It was also, for some, to be effeminate. Since passion and morality were thought to be the realms of women, and thus best suited to the domestic sphere, it became necessary to expunge these qualities from civic and scholarly debate.

Understanding this history of professionalization helps to understand why, in the year 1941, only thirteen of 132 faculty members in the Arts and Social Sciences at the University of Toronto were women. Certainly, the male dominance of the profession at this time was not only related to norms of objectivity, empiricism, nation-buiding, and citizenship. Nonetheless, it must also be said that if scholarly historians were not making clear distinctions between ‘amateur’ and ‘professional’ research during this time, then the practice of history itself might have remained more inclusive.

This history of professionalization also helps to explain why, throughout the 20th century and continuing into the present, racialized and Indigenous faculty have been “under-represented” at very high rates in “the Arts and Humanities” particularly, as Frances Henry, Enakshi Dua, Audrey Kobayashi, Carl James, Peter Li, Howard Ramos and Malinda S. Smith demonstrate. Of course, and as with the case of gender exclusion, the history of racial exclusion is not due only to such ideals as objectivity, empiricism, and citizenship. Racial and colonial privilege and domination have instead been central to the academy itself.

At the same time, within the English Canadian historical profession, there are also certain epistemological associations between historical practice and whiteness, as discussed above. As such, it is imperative that historians turn a critical eye toward their disciplinary customs. Not only the ways by which historians do research, but also the knowledge that is considered valuable and the methods by which that knowledge is communicated, must be evaluated.

In Part 2 of this series, Dr. Belisle will explore the results of a “research-creation assignment” that she conducted in a second-year History course at the University of Regina. It will be posted on 26 January 2021.

Dr. Donica Belisle is currently an Associate Professor of History at the University of Regina, located in Treaty 4 Territory with a presence in Treaty 6. These are the territories of the nêhiyawak, Anihsinapek, Dakota, Lakota, and Nakoda, and the homeland of the Métis/Michif Nation. Her current book project is on the global history of Canadian sugar. She is the author of Purchasing Power: Women and the Rise of Canadian Consumer Culture (University of Toronto Press 2020) and the award winning Retail Nation: Department Stores and the Making of Modern Canada (UBC Press 2011). She also writes about food, whiteness, gender and history. Find links to her works and more at www.donicabelisle.com.