In late March 1983, two Indigenous men began a hunger strike at Kent prison in S’olh Temexw (Stó:lo Territory) near Agassiz, British Columbia, protesting the prison’s unwillingness to provide access to significant spiritual items. This was part of a longer struggle for religious rights. The previous year, attempts to develop protocols for spiritual practices with the Kent prison’s Native Brotherhood Culture Club had failed, leading the organization to decry, the “administration concerning Native Religion within the institution […is] racist and prejudicial.” The prisoners threatened legal and political action, with inmates from nations across Canada and the United States emphasizing the importance of ceremony and spiritual items to their culture and well-being. By 1983 the situation proved untenable and the men began to strike.

When prison officials refused to take meaningful action, the strike escalated. By mid-April, eighteen other Indigenous prisoners had joined the protest, and with this came outside support for the men’s cause. On April 18, Sts’ailes Stó:lo woman Rose Charlie, president of the BC Indian Homemakers’ Association, wrote to Minister of Indian Affairs John Munro condemning the lack of cultural accommodation for Indigenous inmates at Kent and the resulting violations to their religious freedoms. Charlie demanded that the state take immediate action in light of the prisoners’ worsening health, arguing that “next week it may be too late. We want action now.”

In December, the Native Brotherhood Culture Club held a benefit concert at the Oddfellow’s Club in Vancouver to support the Kent strikers, as well as to protect Indigenous spiritual freedoms as a whole. The event poster, which highlighted appearances by local bands, including Vancouver punk band DOA, insisted: “The struggle for religious freedom may one day be yours. Help support the Native struggle to retain their traditional religion inside prison walls.” Through the concerted efforts of Charlie and other women in the Homemakers, the Culture Club, and the strikers themselves, Kent was forced into providing Indigenous prisoners access to spiritual items and religious practices.

Of course, this wasn’t an isolated incident at Kent prison, but part of a larger trend in Indigenous carceral experiences. Two years before, a similar hunger strike occurred in Burnaby’s Oakalla prison where Indigenous inmates – many, political prisoners of the transnational American Indian Movement (AIM) – protested for their right to hold pipe ceremonies and traditional sweats. In fact, at the centre of both the Kent and Oakalla strikes were well known AIM members, brothers Gary and Dino Butler. These local events were part of a larger pattern of radical dissent in which prisoners and their allies challenged the incarceration regimes of many North American and European nations. As a result, prisons became some of the most violent battlegrounds for the enactment and contestation of social movement politics in the 1960s, 1970s, and 1980s.

While commentators often put male activists, such as the Butlers, at the centre of these struggles, the important work of Rose Charlie and other Indigenous women also needs to be highlighted, explored, and remembered. Indigenous women were front-line community organizers who not only participated in the struggle for Indigenous cultural rights in men’s prisons, but also resisted the erasure of Indigenous women’s carceral experiences in policy and the public imagination. Supporting Indigenous female prisoners in the context of family and community cohesiveness, the Homemakers lobbied for women to be placed in institutions close to their communities, and advocated for alternatives to jail, as well as support facilities such as transition houses and treatment facilities. At the same time, they consistently resisted the massive child apprehensions that were often directly tied to incarceration. All of these activities came under the banner of what the Homemakers called the “Family Unit Concept.”

This poster project aims to re-centre Indigenous women’s political work in the struggle for social justice both within and beyond prison walls. In doing so, it tells new stories not only about Kent, but also about the various intersections that linked women’s activism, incarceration, and the wider world of radical social movements in the second half of the twentieth century. 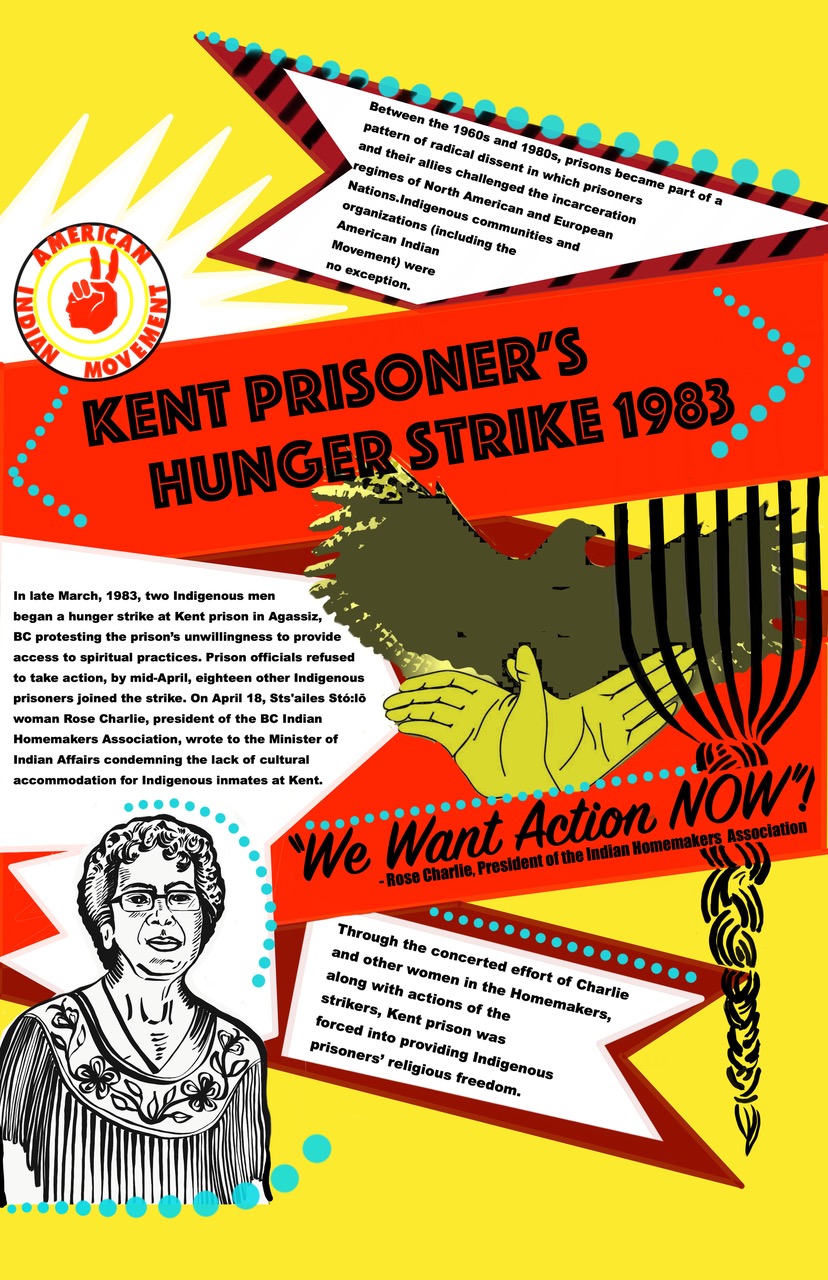 [Image Description: “On this poster red and white ribbons with text criss-cross a yellow background. In the left hand corner, a logo for the American Indian Movement — a red hand with the profile of a face and two figures sticking up within a circle. In the middle of the poster is the outline of a hawk. Hands in front mimic the shape of the hawk’s wings. A braid of hair in black flows over the hawk and down the right side of the poster. On the bottom left is the black and white drawing of an older woman with short curly hair and glasses. She wears a shirt with flowers embroidered around the collar. The text on the poster says: Between the 1960s and 1980s, prisons became part of a pattern of radical dissent in which prisoners and their allies challenged the incarceration regimes of North American and European Nations. Indigenous communities and organizations (including the American Indian Movement) were no exception. Kent Prisoner’s Hunger Strike 1983 In late March, 1983, two Indigenous men began a hunger strike at Kent prison in Agassiz, BC protesting the prison’s unwillingness to provide access to spiritual practices. Prison officials refused to take action, by mid-April, eighteen other Indigenous prisoners joined the strike. On April 18, Sts’ailes Stó:lo woman Rose Charlie, president of the BC Indian Homemakers Association, wrote to the Minister of Indian Affairs condemning the lack of cultural accommodation for Indigenous inmates at Kent. ‘We Want Action NOW!’ – Rose Charlie, President of the Indian Homemakers Association Through the concerted effort of Charlie and other women in the Homemakers, along with actions of the strikers, Kent prison was forced into providing Indigenous prisoners’ religious freedom.”]

Sarah Nickel is Tk’emlupsemc (Kamloops Secwépemc), French Canadian, and Ukrainian, and Associate Professor in the Department of History and Classics at the University of Alberta. Her research examines twentieth-century Indigenous politics through community-engaged oral history and archival methods, with a particular focus on the gendered nature of activism and resistance.

Eryk Martin is a white settler born and raised on Nuu-chah-nulth and Coast Salish territories, and a faculty member in the Department of History at Kwantlen Polytechnic University. His research explores the structure, politics, and culture of social movement activism in Canada and its connections with the wider world.

Tania Willard, Secwépemc Nation and settler heritage, works within a land-based context, wherein Indigenous land rights and pedagogies are entwined within decolonial praxis. Willard’s ongoing collaborative project BUSH gallery, is a conceptual land-based gallery on an Indian reserve grounded in Indigenous knowledges and relational art practices. Exhibiting nationally as well as with public art commissions, her work intersects with curatorial practice and her curatorial work was awarded in 2016 by the Hanatyshn Foundation. Willard is an Assistant Professor at University of British Columbia Okanagan in Syilx territories (Kelowna, BC), and her current research intersects with Indigenous resurgence and land-based art practices.

Waldram, James. The Way of the Pipe: Aboriginal Spirituality and Symbolic Healing in Canadian Prisons. Peterborough, ON: Broadview Press, 1997.

One thought on “Remember/Resist/Redraw #28: Indigenous Women, Prison Activism, and the 1983 Kent Hunger Strike”