Poster and essay by Clare Yow

In the early 1900s in British Columbia, segregated public school education for Chinese children was an issue regularly discussed and attempted in various cities, including Vancouver, Victoria, New Westminster, and Nanaimo. In July 1922, the Victoria School District Board (VSDB) voted to exclusively segregate all racialized Chinese students. When the order came into effect on September 5th, Chinese students were called out of their classes, lined up, and marched down the road. Upon reaching King’s Road—one of the newly-established Chinese-only schools—an older boy gave a pre-arranged signal and students disbanded in protest.

September 5th marked the beginning of a year-long coordinated strike that the Chinese community held to fight segregation in Victoria’s public schools. Described as Huangbai Fenxiao ???? or “yellow and white in separate schools,” the strike was a response to two decades of opposition against racist school policies. It signalled the community organizing to challenge the prevailing ideologies of nation-building and white supremacy that marked them as an “unassimilable race” and perilously different from the dominant white society.

In response to the strike, school trustees defended segregation as beneficial to all. They claimed that the policy was “in the interests of increased economy and efficiency” and not racially motivated. In school board meetings, trustees asserted that Chinese students’ attendance caused “retardation of the class as a whole.” Though many racialized Chinese students were Canadian-born and spoke English as their first and only language, they were nevertheless seen as being at moral, intellectual, and social odds with their white peers. VSDB officials also cited alleged unsanitary practices, predatory adolescent boys, and overpopulated classes as reasons to ban older Chinese students and move younger ones into racialized-Chinese-only schools located near Chinatown.

The Chinese community spent months petitioning trustees to reverse the segregation policy before its implementation, eventually devising the idea of a strike at 608½ Cormorant Street, the Chinese Canadian Club (CCC). The CCC was an association for second-generation Chinese Canadians, a group of locally-born young men who were the children of merchants and professional elites, and all past students in Victoria’s public schools. They were likely galvanized by recent newspaper stories of student strikes in Canton and Mississippi, where Chinese residents mobilized against school segregation. Additionally, war-time contributions created a sense of pride and increasing solidarity amongst marginalized workers. In the Greater Vancouver area, Asian workers—consisting mostly of individuals with Chinese, Japanese, and Indian heritage—participated in the upsurge in labour revolts that led to the 1919 general strikes and the creation of the One Big Union.

During the student strike, fewer than six Chinese children attended local public schools, compared to 216 in the previous year. Instead, they enrolled at the Chinese Free School, established in November 1922 for those barred from the VSDB. During this era of white supremacist exclusion, parents advocated for Chinese language and culture education to instill feelings of Chinese nationalism. As well, in response to the climate of hatred and segregation the community forged a common identity as “Chinese Canadians,” mobilizing other Chinese Benevolent Associations to join their cause.

The strike and the fight to end segregated schooling continued into 1923. CCC members and allies engaged in a newspaper letter-writing campaign to refute VSDB’s false claims and encourage other Victoria residents to question the discriminatory policy. The Chinese community eventually agreed to new terms in August. Segregated students were allowed to return to their original schools, with the exception of younger children until their graduation from the second reader (Grade Four) and a group of teenage students requiring extra English-language support in a special class. Despite the end of the school strike, partial school segregation persisted for Chinese students until the 1940s.

Similar to other forms of segregated schooling, such as the Indian residential school system and schools for Black students, separate schools for Chinese students stemmed from the white supremacist thinking used to maintain European hegemony, reinforce racialized differences, and support Canadian nation-building. The federal government’s implementation of the Chinese Exclusion Act on 1 July 1923—the prohibition of nearly all immigration from China—was a profound disaster for the community, well after the Act’s repeal in 1947. White hostility and anti-Asian racism in BC and Canada have persisted with various waves of immigration, and into the present day with the COVID-19 pandemic. As in the past, however, Chinese Canadians continue to organize and resist racist ideas and practices. 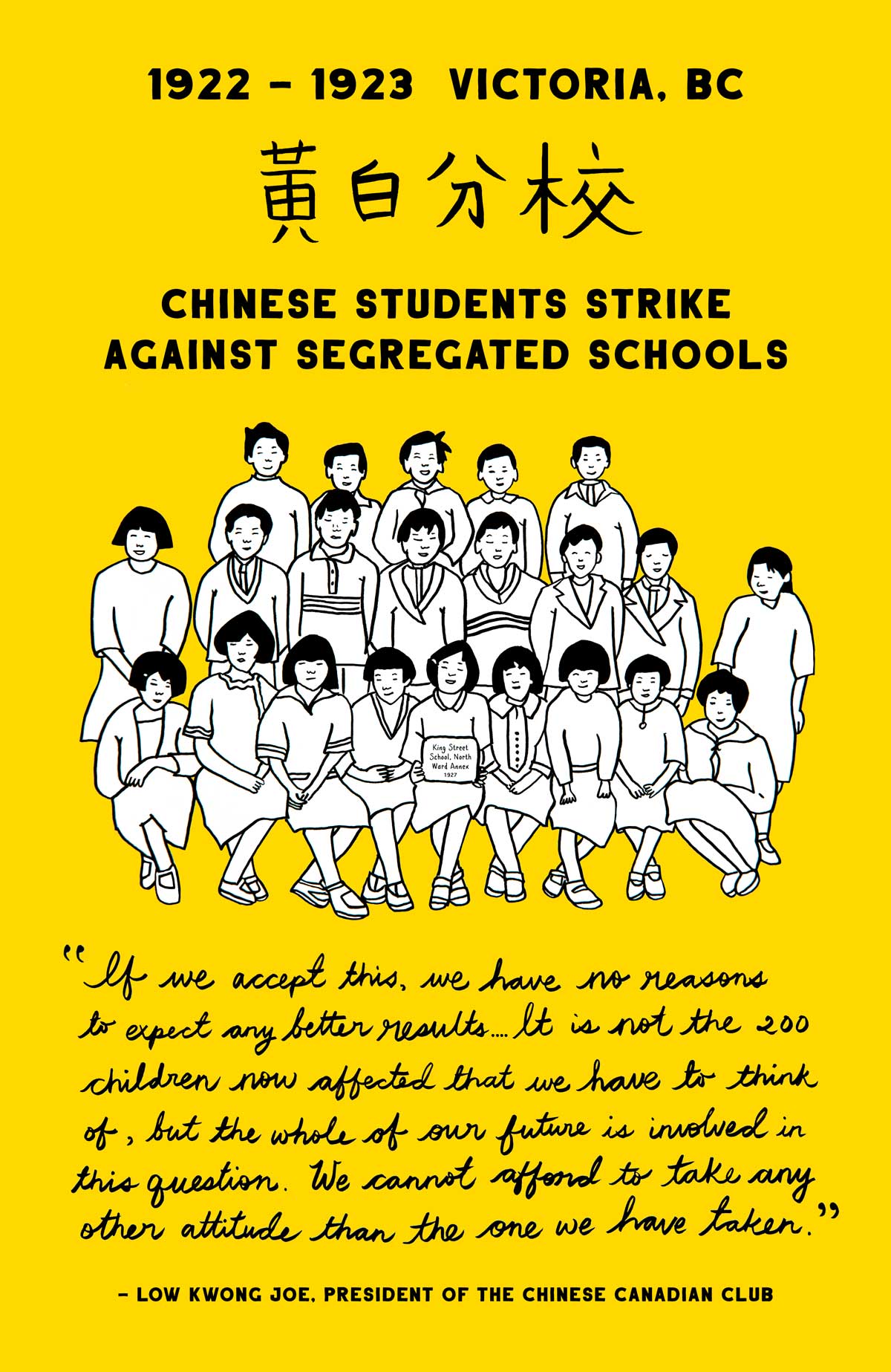 [Image Description:“The poster has a bright yellow background with a black and white drawing of students posing for a school photo. The title says: 1922-1923 Victoria, BC. Chinese Students Strike Against Segregated Schools. Below the image a quote reads, ‘If we accept this, we have no reasons to expect any better results…It is not the 200 children now affected that we have to think of, but the whole of our future is involved in this question. We cannot afford to take any other attitude than the one we have taken.’ – Low Kwong Joe, President of the Chinese Canadian Club.”]

Clare Yow is a visual artist whose lens-based art practice revolves around the politics of identity and being. She focuses on how race, transnationality, and feminist culture intersect with the everyday while continually situating herself on the lands she has called home as a Chinese-Canadian diasporic immigrant and settler. Clare resides, works, and parents on the unceded, ancestral, and occupied territories of the Musqueam, Squamish, Tsleil-Waututh First Nations, known as so-called Vancouver.