With the Quiet Revolution, identity in Quebec shifted from an association with French Canada to one more tightly bound by the province’s political borders. Quebec’s so-called national history similarly refocused to emphasize histories of Quebec rather than histories of francophones living elsewhere in North America. Along with this transition was buried the shared history between Quebec and the Prairies. As a consequence, many Quebecers today have difficulty associating Quebec with Canada’s colonization of the west. 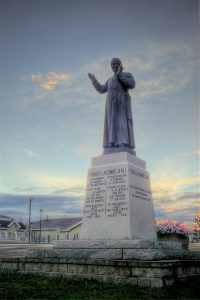 Memorial statue of Father Albert Lacombe, one of many French Canadians who worked on the Prairies during the 19th and 20th Century. (Wikimedia Commons)

Although the media has begun to discuss Quebec’s twentieth-century residential schools, too often in Quebec, when we learn about tragedies like the one at Kamloops Residential School, we continue to hear common refrains that absolve Quebecers of their participation within this genocidal system.

Some say: “It was the Federal government!” As if Quebecers do not elect their members of parliament and participate through them in the government… don’t forget about Hector-Louis Langevin.

And yet others lament: “We have suffered under the British yoke. French Canadians were friends with Indigenous peoples.” As if the desire to eliminate these peoples did not begin in the seventeenth century… don’t forget about the narrative of New France’s Golden Age.

These are not old pre-Truth and Reconciliation Commission claims. From his perch at the Journal de Montreal, columnist Mathieu Bock-Côté made just these arguments earlier this week.

Catholic missionaries from Quebec and France were very present on the Prairies and west coast by the mid-nineteenth century. Even before the Canadian government built the residential school system in the 1880s, these people tried – and sometimes succeeded – to build these types of institutions.

To do so, Catholic peoples in Quebec and France provided them with funding, human resources (such as religious teachers and lay brothers), and equipment (such as vestments, alters, and shoes). It was upon this foundation that the subsequent residential school system was built.

It was not just the “Church,” the “Government,” and the “English.” It was also French Canadians and Quebecers.

In addition to the religious presence and financing from Catholic parishes, this history also took place in Quebec schools. For more than a century, the racist ideologies underpinning this system were perpetuated by the school system in nearly every subject and at every level.

The fact of the matter is that Quebec society has much work to do in order to understand the role it played in Canada’s genocidal history and to comprehend the impact that this rupture in memory has had in constructing modern Quebec.

In part, this work must be taken up by historians. If, once, historians like Lionel Groulx told French Canadian missionary history as part of a grand – but racist – narrative, it falls to historians today to write their histories with greater attention to evidence than story and to do so within a context of reparations.

My actual research is on the valorization of Father Albert Lacombe. Born in Saint-Sulpice (L’Assomption) in 1827, he was one of Quebec’s most celebrated missionaries. Over the past two centuries, he has gained international recognition in Canada, the United States, Ireland, and France. One of his several biographies was even translated into Polish and he was portrayed in the 1949 Hollywood Western Canadian Pacific.

Despite his fame, it was only a few years ago that I first heard about him. The Quiet Revolution had erased Quebecers’ memories of him and their school textbooks.

When I began my research about him, I had no idea that it would lead to the history of residential schools, linking him to the beginning of the system itself. I knew that he was heavily involved in western colonization as a mediator between government, trading companies, the Métis, Niitsítapi, and Nehiyawak; a peacemaker during the northwest resistance; an interpreter during the numbered treaties; a close associate of the Canadian Pacific’s William Cornelius Van Horne; a correspondent with John A. Macdonald; and a friend of Lady Aberdeen. Wherever he went, his reputation preceded him. In Quebec, he achieved hero status. Stories about his life were told to children long after his death in 1916. All of this was at the heart of my project.

Historians have already shown how possessing Indigenous Land and the annexation of the Prairies were crucial elements of late-nineteenth century nation building. But what was the importance of this colonial conquest in Quebec? How was the colonial conquest of the west interpreted in nineteenth-century French Canada, and the century that followed? What did Father Lacombe’s letters and speeches mean for French Canadians? What were the arguments that elicited the largest donations from Montrealers? How did his reputation as a hero take form during his early years as a missionary?

These were my questions. And then came the news about the graves at Kamloops.

That very same day, I was deep in the archives, still at the beginning of this project. I read a letter, written in June 1895 and sent from Saint-Joachim (Edmonton), to the Mother Superior at a convent in Nicolet (Quebec). Lacombe noted that he might send two young Métis girls who speak English, French, and Cree. “I think that their mother will gladly give them to me,” he wrote. These children were to “replace” another Métis girl who had died, likely after having been sent by Lacombe to that same institution.

Then came other archives, where I learned that he was the founder and director of the industrial school at Dunbow (High River), Alberta. This was one of the first three industrial schools built by the Federal government. In a eulogy delivered at his funeral, a colleague noted: “he would move heaven and earth in order to get the Federal government to adopt a new plan to civilize and Christianize the savages: the establishment of industrial and boarding schools for the Indians. He demonstrated to the Prime Minister the failure of day schools so completely that he won his case entirely. The industrial school at St. Joseph, at Calgary’s doorstep, was opened.”[1]

Many children died in this school. In 1996, soil erosion around the old school led to the discovery of several children’s bodies, left to rest in unmarked graves. A short film (linked below) was made about this in 2014.

There are many architects of the residential school system: Ryerson, Macdonald, Langevin, Grandin, Lacombe. There are others whose names still need to be added.

My research is not about Lacombe’s role in establishing western residential schools.

Was it really him who convinced Macdonald and Langevin to build these institutions or was it just an exaggeration in the eulogy of someone many considered a hero and – at the time – an act such people also thought heroic?

It is not really the truth that I seek.

What I want to know is what the population of Quebec thought about Lacombe. How did they support him? How did they valorize him? And in what ways were his actions, and how French Canadians interpreted them, an important brick in the construction of French Canadian nationalism? This history is profoundly linked to the history of residential schools. These are the links that need to be clarified.

As a historian, I can no longer stick to my initial research plan, after confronting these archives. Without changing my research entirely, I must take action. I plan to note the children’s names when they are mentioned and find a way to honour their memory.

Catherine Larochelle is an assistant professor of history at the University of Montreal and an editor at HistoireEngagée.ca. This post was translated by Thomas Peace.

[1] Eulogy delivered by R. P. H. Leduc, o.m.i. I am grateful to Benoit Gaudreault for drawing my attention to this archive.