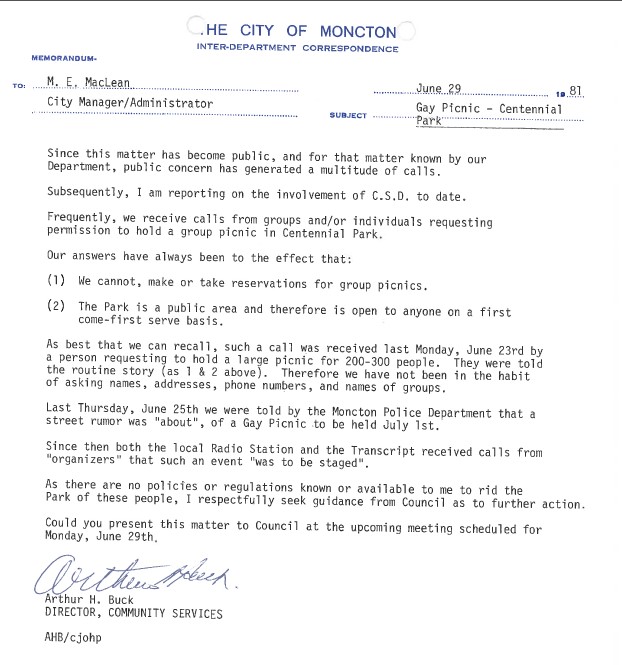 On Wednesday, July 1st, 1981, Dominion Day, a group of 250 gays and lesbians met in Centennial Park, in Moncton, New Brunswick. All attending as individuals, some hanging out near the fringes of the park in case any trouble kicked-off, while police officers looked on, surveying the crowd. This gay picnic was the cause of huge consternation throughout the city in the days leading up to the event, resulting in a panicked city council enacting a by-law which prevented any group of over 40 people from holding an event in a city park without a permit, in an attempt to force the group to cancel. This summer marks the 40th anniversary of this, small, but significant event in Moncton, when instead of conceding to the City Council’s new by-law, gays and lesbians attended the picnic despite the threat of violence and arrest.

Moncton in the 1980s for the LGBT population was much like it was for other cities in the Maritimes: violence was rampant and “fag beatings” were frequent. There was a widespread hesitancy to be publicly identified as gay, and those who did faced dismissal at work and constant harassment. The picnic was also held in a year that saw lots of pushback from queer folks for the way they were being treated. The AIDS/HIV crisis was still in its infancy, as cases of pneumonia and cancers specifically affecting gay men were being reporting in the United States, first called Gay-Related Immune Deficiency. In fact, the very first AIDS case in Canada was reported in March 1981.[1] Raids on Toronto Bathhouses by police on February 5th, 1981, as part of Operation SOAP, saw 286 men charged with being in a common bawdy house and 20 charged with keeping a common bawdy house. A massive protest against the actions of police began the following day in the Gay Village. Toronto also held its first pride parade in June in response to the raids.[2]

Fredericton Lesbians and Gays (FLAG) had formed in 1979, but there wasn’t an organization for gays and lesbians of the Moncton area and the picnic organizers had hoped that by bringing the community together a group would be formed. In the week leading up to the picnic, organizers had attempted to reserve the park, but they were told by the Department of Community Services that the park was open on a first come, first served basis. The organizers did not tell the city department that it was a lesbian and gay event and when Moncton Police followed up a few days later, the city workers were shocked that a rumor was going around that it was a “gay picnic” that would be held on July 1st. The media did not help when it dramatically overstated the number of participants in an article, estimating around 500 people would be attending from the East Coast, perhaps from as far away as Toronto.[3]

Hours prior to the regular city council meeting on June 29th, the Director of Community Services, Art Buck, wrote to the City Manager explaining that his department had received a call, but that the park could not be booked for events: “As there are no policies or regulations known or available to me to rid the park of those people, I respectfully seek guidance as to further action”.[4] During the meeting, the councilors, who had been receiving letters and phone calls from their constituents, resolved that the picnic went against the purpose of the park which was supposed to be a “family park” used for the enjoyment of the citizens of Moncton.

Picnic organizer, Don Cormier, addressed the council explaining the present conditions for Moncton’s estimated 8,500 lesbian and gays, noting that many faced daily harassment, physical assault, destruction of property and loss of employment. The purpose of the picnic was to bring people together and to work on forging relationships to better the conditions for the lesbian and gay community with groups like city council, police and medical services. Cormier was adamant that it wasn’t an opportunity for a mass sexual encounter: “We’re bringing picnic baskets, not water beds”.[5]

Councilors feared violent altercations if the picnic went ahead. One councilor suggested that an alternate location be found for the picnic, but swiftly added, “I know in our minds where they can go. All we can hope for is one hell of a thunderstorm on Wednesday”.[6]

A special council meeting was held the night before the picnic for a second reading of the proposed by-law, in which councilors unanimously voted that groups of over 40 people would need to apply to the city for authorization to hold their event. Disobeying the bylaw would result in a fine of $100-200 or 10 days in prison, meaning that the city could turn away groups it considered undesirable.[7]

Despite this panicked clamp down, close to 250 people attended as individuals, instead of openly uniting as a group in opposition to the bylaw. Picknickers traveled to Moncton to show their support, including members of the Gay Alliance for Equality (GAE) in Halifax.[8] Noella Richard, remembers attending, but keeping a distance from the other picnickers in case of a violent confrontation between police and picnic-goers. “I remember some people were afraid of arrest or being photographed and being on the front page of the paper the next day. Those were not safe days”.[9] Picnickers were watched closely by police and that baseball bats and metal pipes had been confiscated from one vehicle.[10] Acadian businessman, Art Vautour Toole, who attended the picnic, remembers many of his friends were hesitant to attend or backed out at the last minute. He remembers that the reactions of the attendees was mixed, some preferred to stand on the sidewalk and watch quietly, while others where in the park shouting at police and onlookers. He also remembers seeing men with bats and hearing the sound of cars being hit in the distance, which is when he and his friends decided to leave shortly afterwards.[11] 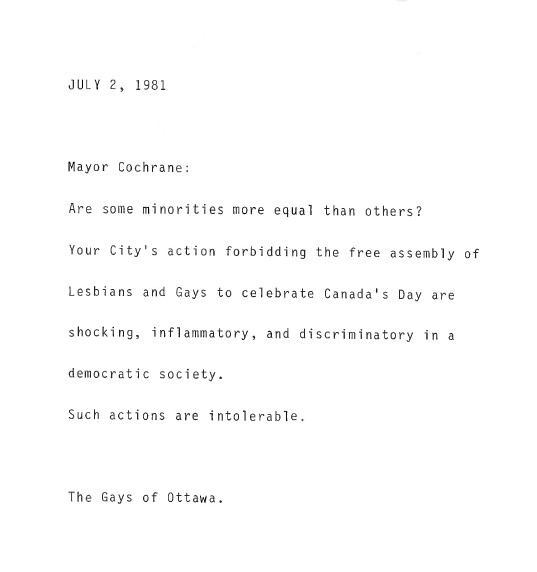 Halifax’s GAE wasn’t the only group to show support; Gays of Ottawa, among other groups, wrote to Mayor Dennis Cochrane in the days after the event, describing the city’s actions as “shocking, inflammatory and discriminatory in a democratic society”.[12] N. Bev MacDonald, wrote to the council on behalf of the Atlantic Gay Association, a coalition which represented the three main gay rights organizations: FLAG, GAE and Northern Lambda Nord, calling Moncton a “closeted city”. MacDonald stated, “The gay and lesbian community of Moncton is unorganized and, for the most part, isolated. It was the feeling of some members of the community that the time had come to organize a group in the city in order to provide for the community’s social and political needs”.[13]

This event, which Moncton City Council had tried desperately to cancel, was successful in opening the doors to the creation of Gays and Lesbians of Moncton / Gais et Lesbians de Moncton (GLM). Richard became its first president in 1982; she thinks that the picnic may have had an impact on gays and lesbians feeling more comfortable being active or willing to join. A bilingual organization with over 600 members, GLM held dances, published a newsletter, established a phoneline, lending library and office space at the Aberdeen Cultural Centre. Members went on to help the fight for the addition of sexual orientation to the Provincial Human Rights Act, which was achieved in 1992. After all, the gay picnic was a prime example of how city councils could discriminate against queer groups.

This is not the only example of municipal governments taking steps to prevent 2SLGBTQ+ groups from organizing. Notably, Fredericton City Council blocked Fredericton Pride’s attempts to have a Pride Week until 2010. In 2019, Moncton City Council was again under scrutiny when concerns were brought forward by city workers about the potential dangers of Pride rainbow painted crosswalks. City staff feared that it would distract drivers, causing accidents in the city’s downtown. However, this time council unanimously rejected city employee’s recommendation to keep crossings the traditional white in favor of showing respect for the city’s LGBTQ+ community.

That evening after the picnic, Vautour-Toole says, a big party was held in the North end of Moncton at Cormier’s house. 40 years later, when he looks back at his memories of that night, he feels that they turned a negative day into a positive celebration and remembers lesbians and gays coming together as equals. [14] This small, but important event from our past demonstrates the resiliency of queer people which is key for current and future generations to learn about and shows how times have changed.

Meredith J. Batt is an archivist at the Provincial Archives of New Brunswick and is the President of the Queer Heritage Initiative of New Brunswick, an archival initiative which aims to collect the history of 2SLGBTQIA+ people. Their forthcoming book, Len & Cub, with co-author Dusty Green, explores one of the oldest photographic records of a same-sex couple in the Maritimes and will be released April 2022 with Goose Lane Editions.

[2] Craig Jennex and Nisha Eswaran, Out North: An Archive of Queer Activism and Kinship in Canada, (Vancouver: Figure 1 Publishing), p.180.