This is the ninth post in the series Historians Confront the Climate Emergency, hosted by ActiveHistory.ca, NiCHE (Network in Canadian History & Environment), Historical Climatology, and Climate History Network.

I recently taught a remote, intensive Summer course entitled ‘Themes in World History’ at McGill University. This course was aimed mostly at second- and third- year undergraduate students. I chose as my theme ‘Climatic and environmental change.’ This provided me with many opportunities, one of which was to teach students a historical perspective on the current climate emergency. What follows is a description of the thought processes behind my course design and its objectives, as well as a reflection on its successes and shortcomings.

World history and the climate emergency are highly compatible subjects for two core reasons. First, the climate emergency has no respect for human borders, and so, like world history, it transcends traditional spatial paradigms in the humanities and the social sciences, such as nation states and area studies. Second, world history courses tend to attract students with vastly different disciplinary backgrounds, not just history majors and minors. A historical perspective on the climate emergency, which students are generally conscious of and interested in, therefore, can act somewhat as an entry point into the study of history more broadly. Additionally, understanding the role of climate in history necessitates a high degree of interdisciplinarity, incorporating climatological and other perspectives from the natural sciences. Students can engage with climate history from a variety of disciplinary standpoints. 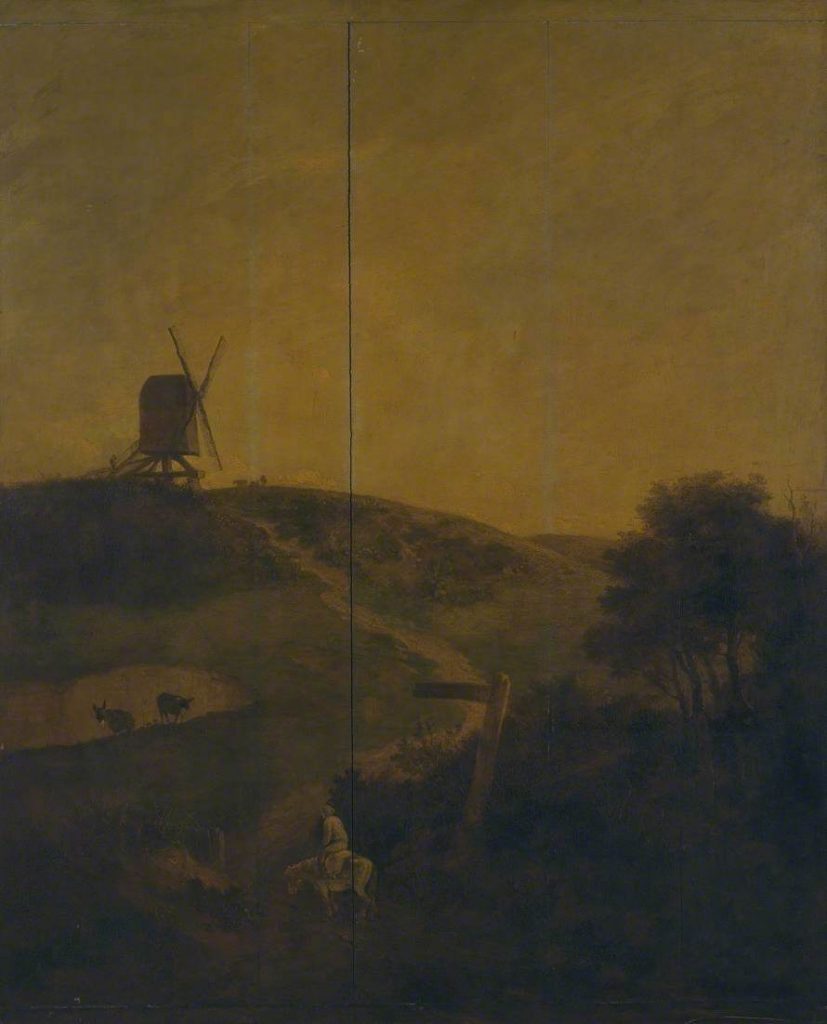 John Crome, A Windmill near Norwich, 1816, Wikimedia Commons. The style of this painting is characteristic of the Romantic movement, whose dates (c.1790-1850) roughly correspond to those of the late Little Ice Age (c.1780-1840). Crome painted this image in the ‘Year Without Summer,’ a year of severe cold in Europe and other global regions following the eruption of the Tambora volcano, in present-day Indonesia, in 1815.[1]

At the outset, I posed two core questions to my students, which we returned to throughout the course. These were, first: If the present and future of humanity are to be indelibly shaped by how it responds to the current climate emergency, how have past human societies also been affected by climatic and environmental changes? And second: How can historians and historical methods help to build strategies to mitigate against the effects of global warming in the present and future? Exploring answers to these questions formed a core feature of the course. This exercise emphasized the urgency of the endeavor undertaken in the course and encouraged students to think about the wider (inter-)disciplinary implications of the topics they studied.

The course, being an intensive summer course, took place over five weeks. This meant that it naturally broke down into five sub-topics. The first sub-topic was thematic in focus. It asked students to examine the origins of the current climate emergency. This led them to encounter critical approaches to the popularized Anthropocene, first conceived of in the early 2000s by natural scientists, Paul J. Crutzen and Eugene F. Stoermer. Students read articles on the Capitalocene and listened to a podcast on the Plantationocene (developed by Donna Harroway, a scholar of feminist studies, and Anna Tsing, an anthropologist). Students were asked to think about what processes have contributed to the current climate emergency over the long-term. This demonstrated that the climate emergency cannot solely be understood as a ‘modern’ problem, illustrating the need for historical and other interdisciplinary perspectives.

The subsequent four sub-topics focused on different periods in world history during which global climatic factors were particularly adverse, often leading to turning points in several societies’ histories. The aim was to show how states and societies adapted (or failed to adapt) to periods in history during which global climate was particularly extreme or erratic, such as which is projected to characterize conditions under current global warming. These periods were respectively: c.1585-1610, c.1585-1715 (the seventeenth-century general crisis; there was clear overlap with the first period here), c.1780-1840 (the late Little Ice Age), 1876-78 (the ‘global famine’). For each, students had to complete two core tasks. Firstly, they were asked to establish what global climatic factors contributed to adverse conditions, such as El Niño Southern Oscillation (ENSO), volcanic eruptions, and solar activity. Secondly, they had to examine in what ways states and societies responded to adverse conditions, exploring factors that contributed to vulnerability or resilience therein.

Climatological sources were integral to responding to achieving the first task. Since the 1990s, the climate emergency has inspired a lot of scientific research on past climatic conditions. For earlier periods (pre-mid-nineteenth century), this is largely through analysis of proxy records, such as tree rings, ice cores, and corals. These can give information on, for example, rainfall and temperature in their locales. Moreover, recently, analysis of several of these records has been used to model global climatic oscillations, such as ENSO, which is known to have teleconnections with regional climates as distant from each other as northern Peru and eastern Africa. They give an impression of past global climatic conditions, thus inviting historians to explore their effects on world history.

What can historians do with this new climatic information? Students explored answers to this question in their first assignment, a Source Analysis Paper, which asked them to analyse the utility of Joëlle L. Gergis and Anthony M. Fowler’s 2009 article in Climatic Change, ‘A history of ENSO events since A.D. 1525: Implications for future climate change,’ to world historians. Using various proxies, this article provides a timeline for El Niño and La Niña events since 1525. Sub-questions that students thought about included: How do we, as historians, deal with uncertainty in the proxy records? What opportunities do they provide if they are analyzed alongside ‘traditional’ historical material, such as archives or oral traditions? And, how could ‘traditional’ historical methods be used to validate or question Gergis and Fowlers’ conclusions? Critically evaluating the article in the context of historical methods enabled students to think about how and what we know about past climates, and how to integrate that knowledge into an understanding of world history.

Case studies formed the basis of the second core task per weekly sub-topic, that is, assessing the effects of adverse climatic conditions in world history. Students answered two essay questions related to this task, always considering the extent of our knowledge of past climates as they did so. Notwithstanding some notable success stories in the face of adverse climatic conditions (for example, the Dutch ‘Golden Age’ coincides almost exactly with the seventeenth-century general crisis), disasters and state collapse were recurrent themes, whether discussing the seventeenth-century Ottoman Empire, the French Revolution, or the 1876-8 ‘global famine.’ Governments and/or rulers were frequently unable or unwilling to mount effective responses to adverse climatic and environmental conditions, despite the urgency of the conditions they were faced with.

The themes of the course were frequently morbid, and this took its toll over the course of the five weeks. The relentlessness of difficult material is something that I will account for in advance if I teach this course in such an intensive format again. However, in order to give students (and myself) relief this time around, I re-arranged and re-designed course materials, especially in the final weeks. I organized more break-out sessions, in which students could collectively discuss and digest materials, instead of just absorbing them on their own (isolation in this context was certainly exacerbated by the fact that I taught the course remotely during the Covid 19 pandemic). I also designed a digital methods session in which students used the KNMI Climate Explorer to map the 1876-8 ENSO event and resultant ‘global famine.’ This gave students a hands-on opportunity to explore primary materials and their implications in a digital environment. The maps that students made and the ways some of them deployed them in their final essays were extraordinary. One student (a computer programming major) even went so far as to design and share a tool to make the Climate Explorer’s rain gauge data more accessible and analyzable through conversion of its tables into CSV files. In so doing, they showed the interdisciplinary potentialities of climate history in action.

Of course, though, the morbidity of the themes covered in this world history course has direct implications for how we understand the current climate emergency. The climatic conditions under review, whether during the seventeenth century general crisis or the late Little Ice Age, mostly represent relatively minor natural oscillations compared to our current plight in the face of unprecedented global warming. Moreover, the effects of past adverse climatic conditions were frequently exacerbated by imperial and capitalist expansion, especially in the Global South. The course emphasized the urgency of the current climate emergency, especially as, in line with patterns from the past, capitalism is exacerbating vulnerabilities to adverse climatic conditions in several regions, and governments appear unable or unwilling to build effective mitigative strategies. Current responses to the climate emergency were shown partly as a longer-term continuum of ineffective mitigation strategies across large areas in the face of adverse climatic conditions.

As a rule, I designed the course with a view to exploring the multitude of ways in which different people(s) have experienced adverse global climatic factors in world history. This meant not just teaching about empires and states, but also about ‘stateless’ societies, such as indigenous populations in present-day Alaska in the aftermath of the 1783 eruption of the Laki Volcano in Iceland. I also exposed students to variations across socio-economic class, examining how it was frequently the poor and/or bonded/enslaved who experienced the worst effects of adverse climatic conditions. But there is more that I could and should have done here. Gender and generation were themes that I neglected – a significant oversight given that several studies show that it will be women and children (especially girls) who are bearing the brunt of the current climate emergency. Thus, while climatic and environmental change lends itself to teaching a thematic course on world history for the ways it transcends borders, there is a need to also bear in mind what is going on within those borders as well, and to not smooth over social and other differences within them. This will be a challenge when teaching the climate emergency in (world) history moving forward.

Dr. Philip Gooding is a postdoctoral fellow at the Indian Ocean World Centre, McGill University working on a SSHRC-funded Partnership project led by Prof. Gwyn Campbell: ‘Appraising Risk, Past and Present: Interrogating historical data to enhance understanding of environmental crises in the Indian Ocean World’. He is also the recipient of a SSHRC Insight Development Grant for his own project: ‘Climate History and Human-Environment Interaction in Equatorial Eastern Africa, c.1780-1900.’

A syllabus of the course can be found here.

[1] According to Zachary Hubbard, ‘Crome’s attention to the skies allowed him to give an accurate view of the “year without a summer.”… Within this work, the view is blocked by a lingering darkness. The sky is unquestionably dim and heavy with haze. The volcanic sulfates surrounding the world at this time obstructed the view. Looking at the art as it is now, an observer will notice that not only is the sky dark, but the entire picture is bleak. Crome illustrates a dismal time with the darkness of starvation, poverty, and lingering death, instilling a feeling of dread in the viewer’ (Zachary Hubbard, ‘Paintings in the year without a Summer,’ Philologia (2019)). In my course, students studied such images and their representations as examples of the effects of global climatic anomalies on human societies, the kind of which are projected to become more frequent and severe during the ongoing climate emergency.