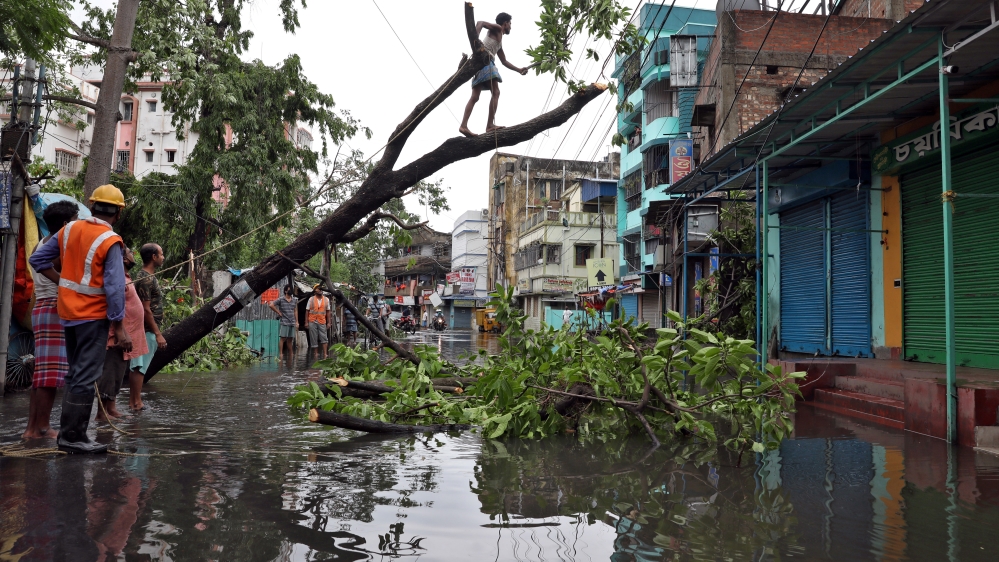 Damage in Kolkata from Cyclone Amphan, May 2020. Source: Reuters via Al Jazeera.

This is the twelfth and final post in the series Historians Confront the Climate Emergency, hosted by ActiveHistory.ca, NiCHE (Network in Canadian History & Environment), Historical Climatology, and Climate History Network.

In May 2020, Cyclone Amphan battered the east coast of Bangladesh and India, especially Kolkata and the Sundarbans, leaving hundreds of people dead and causing damage of over $13 million USD. This was not the first time such a storm had battered the coast but was only one in the long history of such events. In 1999, a super cyclone in Orissa killed 10,00 people and destroyed 210,000 houses. In flood-prone cities the dangers are even greater. For example, in cities in the region such as Ho Chi Minh City, Kolkata, Dhaka, and Manila, potential sea level rise and the increased frequency and intensity of extreme weather events pose significant adaptation challenges. The urban poor—often living in riskier urban environments such as floodplains or unstable slopes, working in the informal economy, and with fewer assets—are most at risk from exposure to hazards. Regions with active river deltas, such as Kutch in Western India and the Sundarbans, are historically more prone to frequent droughts, famines, pestilence, earthquakes and floods, which can be mapped through the archive.

For the British, the lack of environmental predictability meant a loss of control over the territory and the populace. Colonial surveys, in such contexts, were efforts to establish rule and control over unpredictable landscapes. Local archives, however, reveal knowledges, syncretic histories and pastoralist and fisher narratives that convey past social worlds that were more adept at handling environmental shocks. As such, the archival record on calamitous events, natural catastrophes and environmental shocks as catalogued by colonial sources while very rich needs to be bolstered by local archives and oral histories of communities. The scope of such historical data, both colonial and local, available to refine climate anomalies is underestimated and large amounts remain untapped, but with concerted data rescue activities this situation can be dramatically improved, both back through time and wider in space. As extreme events increase, questions regarding the predictability of such events become more important. Thus, improving the historical weather and climate data base will provide a platform with which to address key concerns in climate change.

The historical record reveals that two devastating cyclones hit the centre of Sundarbans and Calcutta in the latter half of the nineteenth century. This was a period when colonial weather data and collecting cyclones had made a big step forward. Colonial scientists realised that climate and weather are complex and vary through time and geographically. The colonial scientific network allowed for the possibility to collect useful data through lots of data points and an information flow network that spanned Australia, India and oceanic islands such as Mauritius and St. Helena. The ‘Monsoon,’ coined from the Arabic mawsin (a season), was key to understanding world climate; therefore, the Indian peninsula became key to understanding world climate. Between 1700 and 1924, many critical features of world climate were discovered by Indian civil servants, who were mostly Scots, Germans, and Bengali. They included the remarkable Henry Piddington, who wrote the Law of Storms and coined the word cyclone in 1848.[1] By 1852 there were 123 weather stations in India with the Centre of Calculation being in Calcutta. The journal Asiatic Researches published the data which included a detailed study of cyclones.

The 1864 storm had a width of 100 miles and proceeded at a speed of 10-17 miles per hour. The greatest damage on land was from a 15-foot storm surge. At the end of the cyclone, 48,000 people were declared dead in Calcutta and environs (about one third of the population), including those who died in the aftermath due to cholera. The cyclone had a differential impact on rich and poor. In Calcutta alone, 102 well-built houses were destroyed, with 563 severely damaged. On top of that, 40,698 native huts were completely levelled. 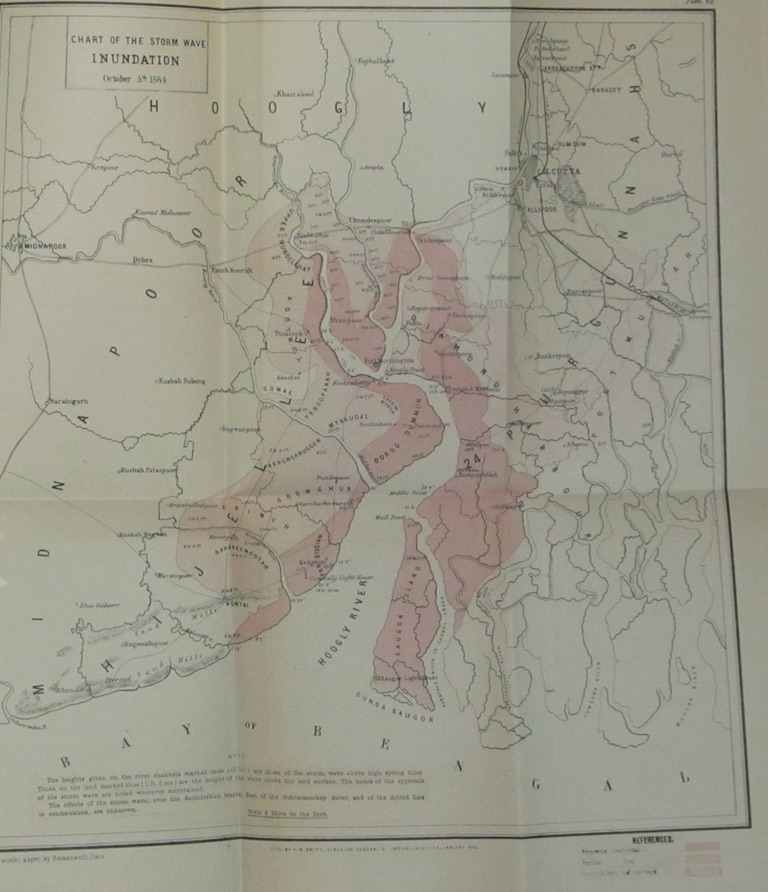 The inundation map of the cyclone of 1864 is useful for understanding the effect of settlement patterns and can help us map the impact of the current cyclone in the context of land use and deforestation history of South Asia and its coastal regions which will us help think in terms of resilience strategies for the future.

In this same period, a scheme was being mooted to develop another port as an auxiliary to Calcutta, at a location about 45 km to the south-east of Calcutta, deeper in the Ganga-Brahmaputra delta, on the Matla River. A town would be settled as well. Beginning in 1853, the work of survey, settlement and the formation of a company occurred in rapid succession. That very year, Henry Piddington, who had moved his residence in Calcutta in order to pursue his varied intellectual interests, wrote to the Governor-General of India stating that, per his calculations, the Matla was directly in the way of cyclones – the term he had coined a few years earlier. He warned that the site would be extremely vulnerable to storm surges. His letter was received, and his proposition was also assessed in the Calcutta Review. In the journal, Piddington’s reputation was commended, but his proposal was refuted on the premise that there were no facts to support his projection. His critics chose to ignore his warning and stated that, given an upsurge in the river, one could always resort to the good old system of embankments. The example of prosperous coastal ports and port towns in Europe were thrown in as comparisons for good measure. Port Canning was commissioned in 1864. In 1867, a storm of moderate intensity brought six feet (1.8 metres) of water over the settlement. The port was completely destroyed and abandoned four years later, never to be rebuilt. Piddington’s claim turned out to be true.[2]

A historical understanding of the impact of past events and traditional methods of coping and adapting to these events in these regions can give us important lessons on how to deal with current extreme events and help build resilience at all levels. It is the most vulnerable groups that have been affected by the recent Cyclone Amphan. With regard to this cyclone, the protection provided by mangroves is an important lesson in how to manage the landscape. The mangroves protected areas such as Khulna in Bangladesh from destruction and salinity due to the long history of British-planted reserved forests in the region. In India, relentless land encroachment and deforestation has intensified the impact of the cyclone and made Calcutta much more vulnerable. As tropical cyclones become more common in this era of global warming, a deep historical understanding helps illuminate the responses of the state, scientists, and local communities to such issues in the past. In 1867, the folly of building Port Canning was made apparent after the Calcutta cyclone, which destroyed it.

Vinita Damodaran is a historian of modern India and Professor at the University of Sussex, interested in sustainable development dialogues in the global South. Her work ranges from the social and political history of Bihar to the environmental history of South Asia, including using historical records to understand climate change in the Indian Ocean World.