A few years ago, on this very site, I published an article about combatting vaccine resistance with historical education. Surely, I thought, if people understood how devastating preventable diseases could be, everyone would be eager to roll up a sleeve and be jabbed.

Such is the pain of living through historic times. At least I learned something.

Like many of the historians who contributed to the recent series, cycling has been an outlet during the COVID-19 pandemic and a way to visit various pockets of my adopted city, Toronto, even as the weather cools and low points in the path become puddles.

When riding up the Don River trail, I always think about a place that no longer exists: the Swiss Cottage Hospital. The twenty-five-bed institution was part of the Riverdale Isolation Hospital complex; it specifically served patients with smallpox. The building was disused for several years when it burned in 1930. The nearby Riverdale Hospital (now Hennick Bridgepoint Health) has a Heritage Toronto plaque but the humbler smallpox hospital has no such marker. 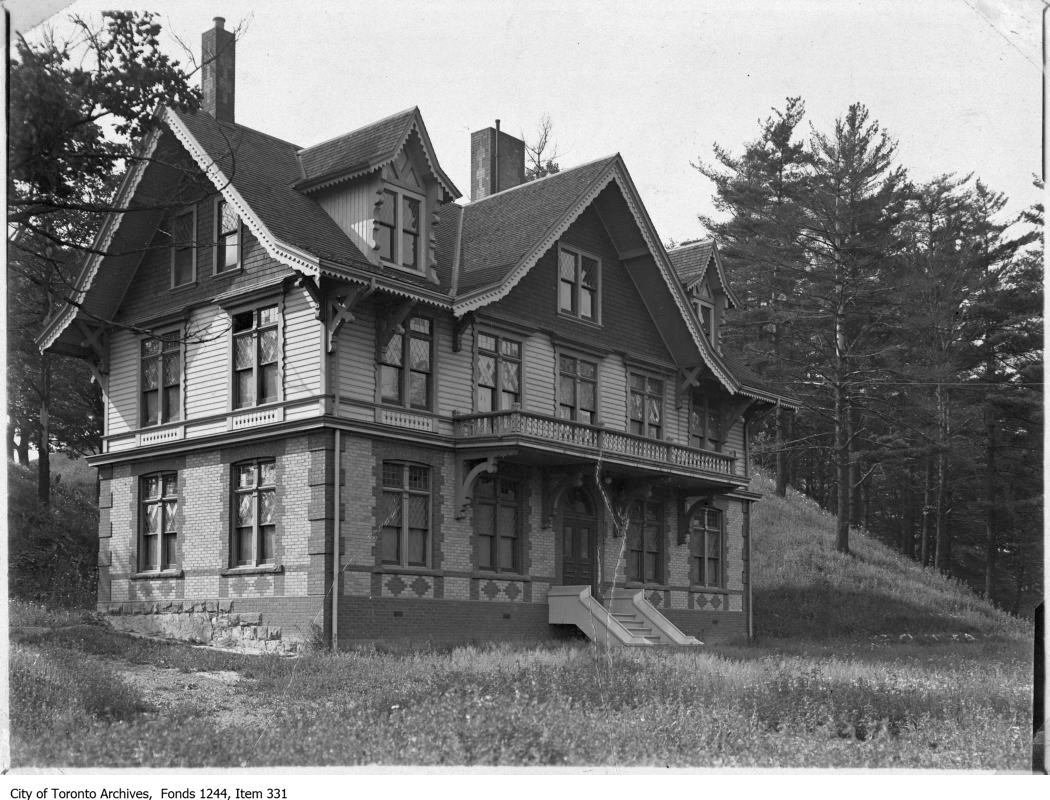 In the second winter of the COVID-19 pandemic I cannot help but think of Toronto’s 1919-1920 smallpox outbreak. It began in November 1919, when public health officials confirmed the outbreak of chickenpox in the city was, in fact, smallpox. 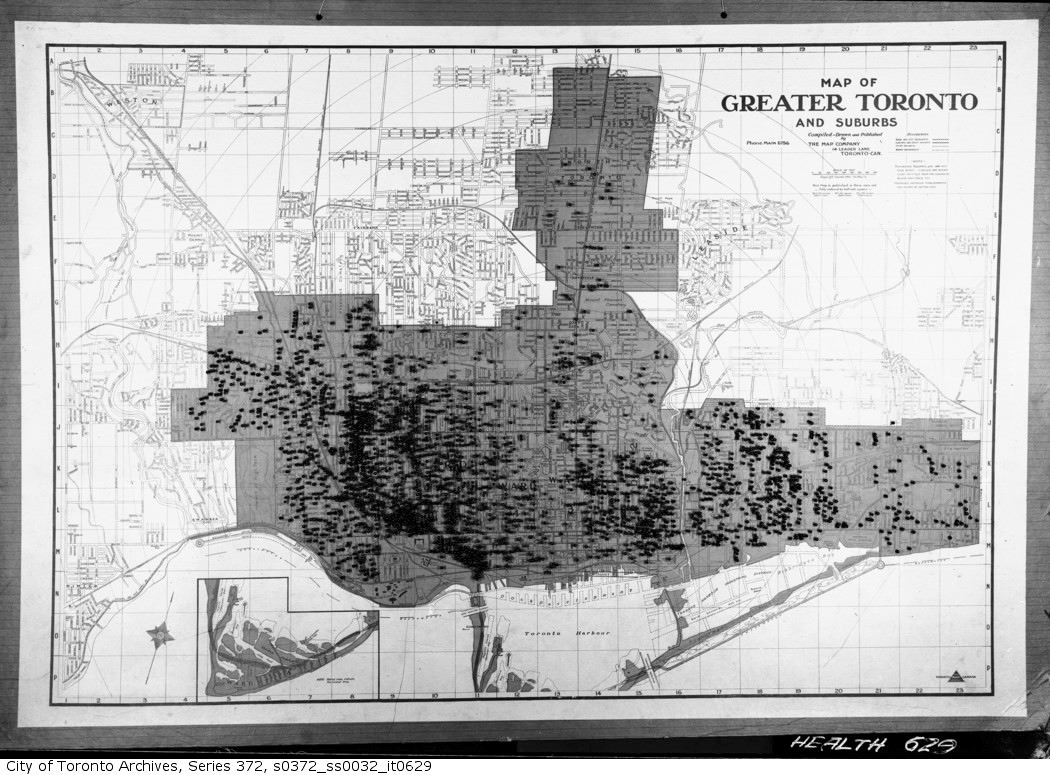 On November 3, 1919, a small item in the Toronto Daily Star warned a “mild smallpox wave is visiting Toronto.” “So far it has not been fatal,” the article noted, “but the health authorities say it will likely become more severe as it spreads.” Fifteen citizens were in isolation[1] at the Swiss Cottage Hospital. Dr. Charles Hastings, the city’s Medical Officer of Health, mandated smallpox vaccination for all Toronto students and sought a city-wide vaccination order.[2]

The general order to vaccinate the general population passed the Board of Health that day. The acting Chair of the Board, Alderman Ryding, did voice some resistance. “Don’t you think that will alarm people[?]” Ryding asked. “I don’t want proclamations posted throughout the city.” Hastings managed to put a stop to Ryding’s grousing, asking, “[d]o you consider your opinion of more value than mine in such matters?” [3]

The next day City Council ribbed Ryding for crumbling and declined to ratify the general vaccination order. Controller McBride argued “[i]f we put this in force it will not be vaccine points, but an ax that will be used. Even if there are two or three persons with smallpox, surely with the hundred or so nurses, the highly-paid doctors and all the money we spend, surely they can look after the situation without very [sic] body being vaccinated.”[4]

Anti-vaccination activists mobilized to prevent city authorities from revising that stance. On November 6 homeopath Henry Becker led a delegation to the Toronto Board of Control, to argue “80 per cent” of Torontonians opposed compulsory vaccination. Becker went on to falsely claim smallpox vaccine was “made from the grease taken from the heels of horses, from swine-pox, and even from corpses…[f]rom dead human bodies.” McBride quipped “the serum is made from horse’s blood. What we need is a little more horse-sense and a little less horse-blood.”[5] He announced he would not be vaccinated or force anyone else to be.[6]

On November 11 anti-vaccinationists planned to meet city council and advance their claim vaccination killed more than three times as many people as smallpox.[7] By November 13, twenty-seven citizens were in hospital with smallpox.[8] That day the Anti-Vaccination League of Canada held a protest at City Hall. Attendees hoisted a banner which read “Stop the Slaughter of the Innocents!” 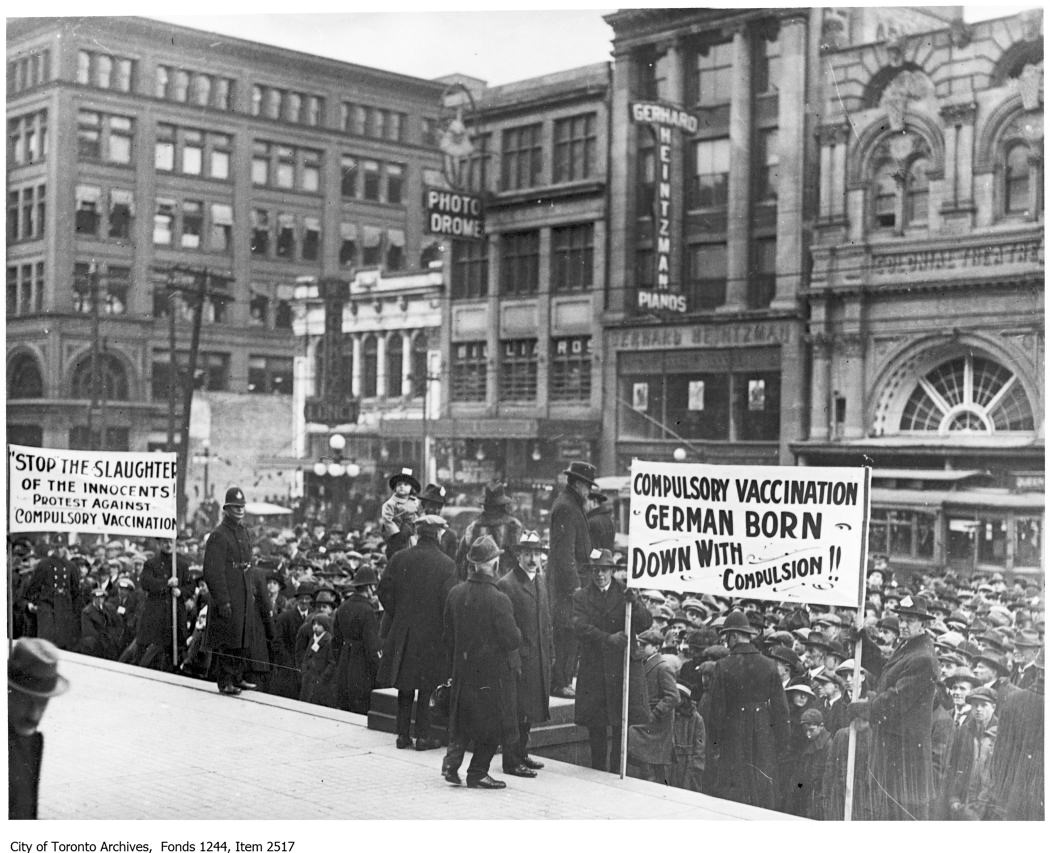 Perhaps everyone reading this during a pandemic would like to take a deep breath and look out the window for a moment.

Fortunately, the 1919 smallpox outbreak was unusually mild, with only 11 deaths in Toronto, a case fatality rate of about 0.4%. Smallpox usually had a case fatality rate of 30-50% (among unimmunized people). Furthermore, in contrast to COVID-19, in 1919 much of the population was already immune through natural exposure and prior inoculation, and there was a known, effective vaccine against smallpox. Toronto’s own Connaught Labs had been producing smallpox vaccine since 1917 and had capacity to produce a million doses in 1919-1920. Despite anti-vaccine rhetoric, 200,000 Torontonians sought out immunization during the smallpox outbreak, in a city of approximately 521,000.

It is a heartening point of comparison. No matter how noisy anti-vaccination activists became, in 1919 and today, a large contingent of Torontonians chose to protect themselves and their communities through vaccination. As of the time of writing 76.1% of Torontonians are fully vaccinated against COVID-19. However, I fear a long winter of rolling lockdowns awaits us.

I wanted to take advantage of a beautiful cycling day before the snow falls so I decided to ride over to Riverdale Park and try to locate the Swiss Cottage Hospital site. Preliminary research did not reveal an exact address. A 1914 Toronto Daily Star article mentioned the hospital was located “over a hill on the east side of the Winchester street bridge east of the Don”.[9] The Winchester Street Bridge is gone, though the Riverdale Park Bridge spans the Don River close by.

I locked my bike up and squelched across the rain-soaked park grounds, trying to triangulate where Winchester Street, now a dead-end west of the Don, would have run in 1919. I hustled toward a concrete pylon I ardently hoped would be a historic plaque of some kind, but upon inspection it was a raised sewer cover.

Luckily, the Riverdale Park East historic plaque includes an archival photo from 1914, showing a cricket match in the park. In the background, in a stand of trees, you can see the east wall of the Swiss Cottage Hospital. 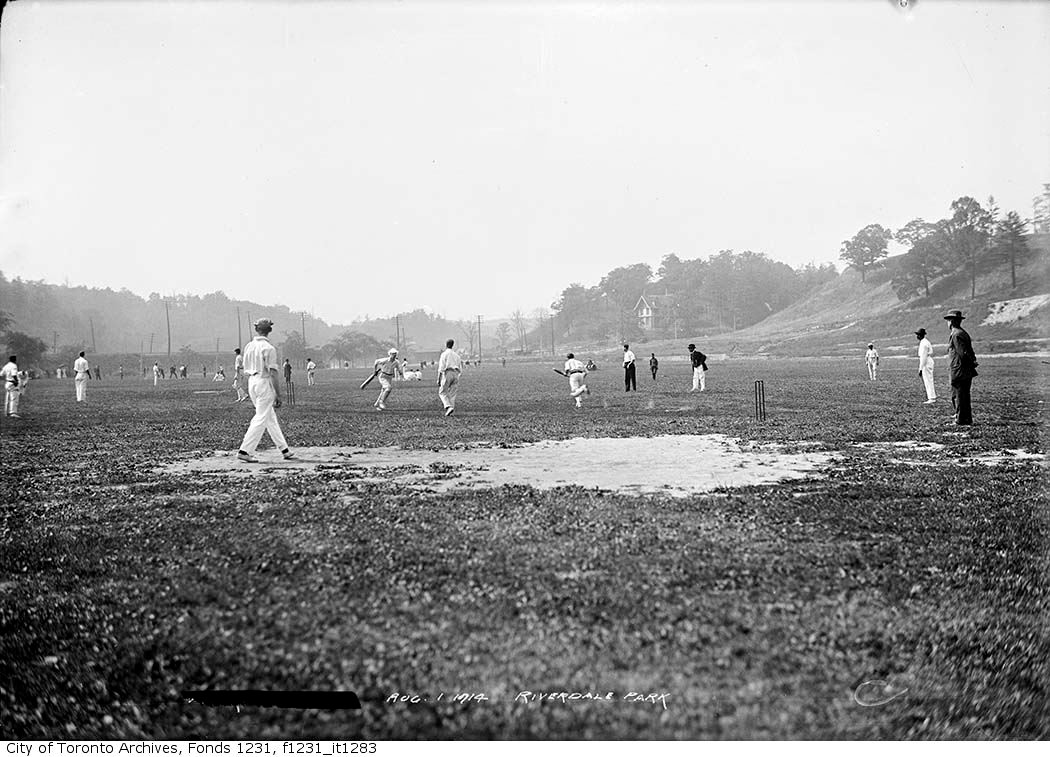 The landscape has certainly changed since then. In the 1990s the Task Force to Bring Back the Don rehabilitated and expanded the woodland right where I believe the Swiss Cottage Hospital stood. They also added a wetland at the bottom of the slope in 2002, turning damp and uninviting parkland into a plant and wildlife habitat. 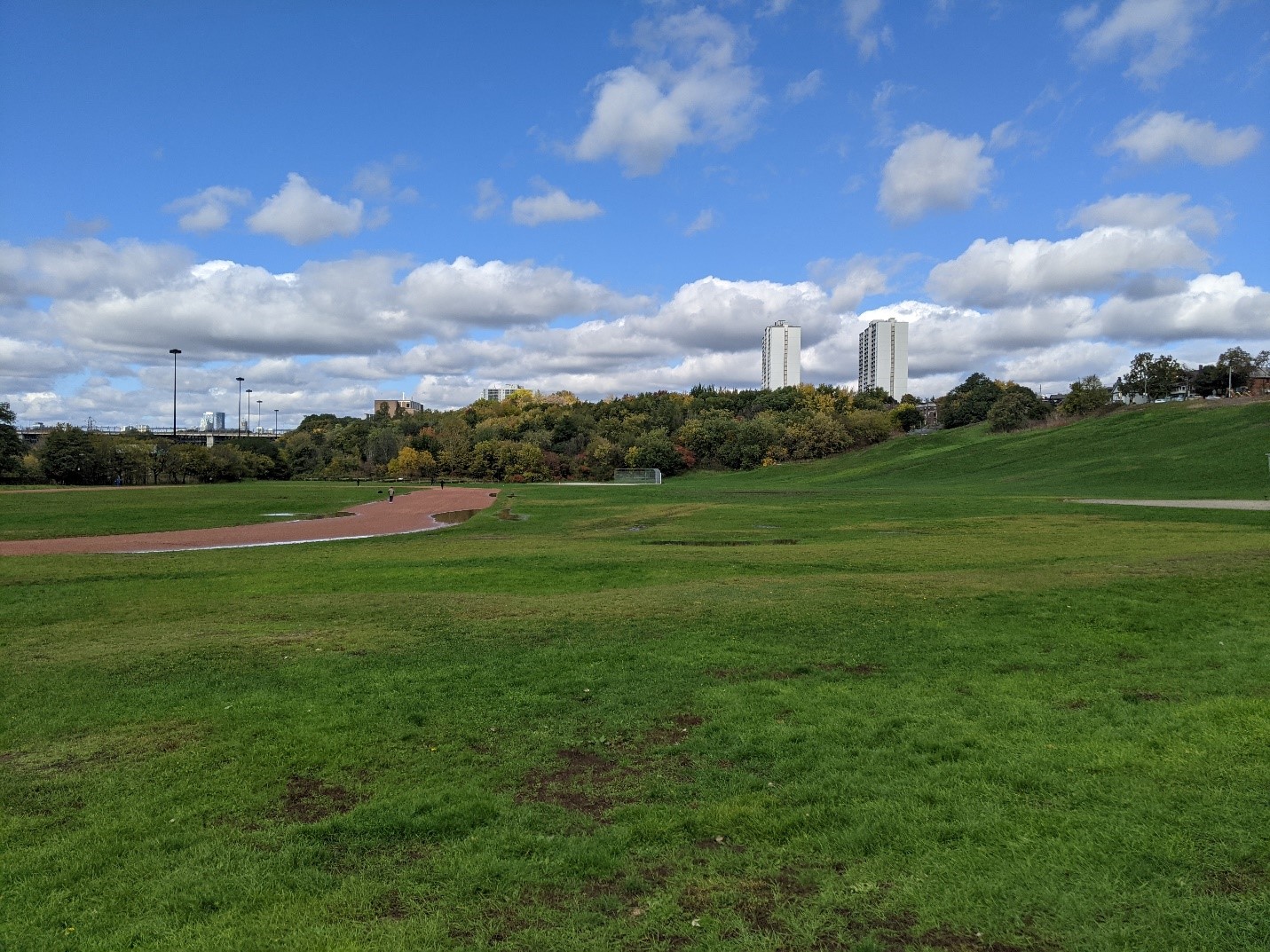 Photo by the author.

I did not want to disturb people camping in the woodland, so I resisted the urge to tramp around looking for bricks and foundations. However, I am strangely delighted by this project, to set out and experience space, and remember what happened there.

Sara Wilmshurst (she/her) studied history at the University of Guelph and co-authored a book, Be Wise! Be Healthy! Morality and Citizenship in Canadian Public Health Campaigns. She now works in historical consulting.

[5] As Joanna Dean explained in her Active History post “Animal Matter: The Making of ‘Pure’ Bovine Vaccine at the Connaught Laboratories and Farm at the Turn of the Century”, smallpox vaccine was actually produced from calves and did not contain blood products.

One thought on “Visiting and Recognizing the Past: Toronto’s 1919-1920 Smallpox Outbreak”