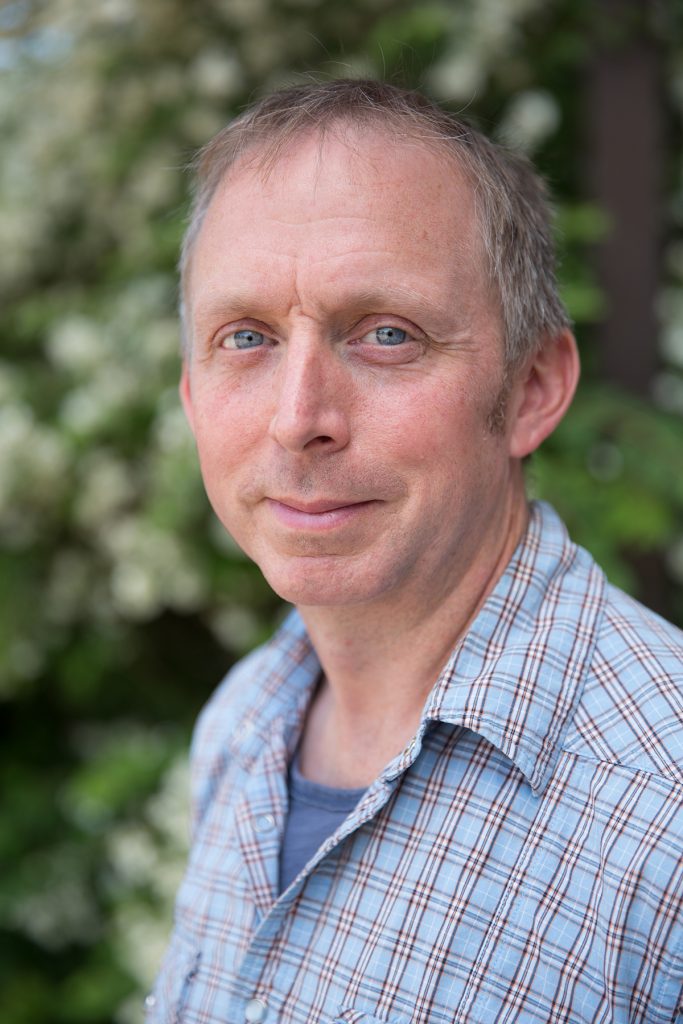 Chris Chang-Yen Phillips and Dylan Hall are MA Students in the Department of History, Classics, & Religion at the University of Alberta. They interviewed Dr. Andrew Woolford as a part of the department’s annual Western Canadian History Lecture. Crystal Gail Fraser and Shannon Stunden Bower edited the transcribed interview for length and clarity. Andrew Woolford is a Professor of Sociology and Criminology at the University of Manitoba. He is also an emeritus member of the Royal Society of Canada College of New Scholars and former president of the International Association of Genocide Scholars.

Chris: In 2021, the news of thousands of unmarked graves at former Indian Residential School sites has forced a national conversation about settler colonialism’s destruction of Indigenous Peoples’ lands and cultures. Why were you drawn to the field of genocide studies?

Andrew: When I began my master’s degree, I was interested in Latin American human rights issues. I traveled to Chiapas, Mexico and was learning Spanish to become a human rights observer in the Lacandon Jungle after the Zapatista Uprising. Simultaneously, I heard news from home about the British Columbia Treaty Process. I realized that I was in Mexico trying to support Indigenous Peoples when I knew so little about Indigenous Peoples in Canada, particularly on Vancouver Island where I grew up.

I interviewed Coast Salish Elders and Leaders for my PhD research on the BC Treaty Process and they often said, “Well, first we have to tell you about the genocide.” For example, in Tsawwassan I learned how the road to the BC ferry terminal destroyed their last longhouse and with the coal port decimated local shellfish populations. At the time, I was TA-ing a course on genocide studies, which was my first introduction to this field. These two intellectual pursuits – Indigenous histories and genocide studies – made me think, “What has been said about genocide in Canada and why do we seldom discuss it? Whose power is reflected within the conceptual architecture of genocide?”

Dylan: How do you grapple with the concept of genocide, given its strong association with the Holocaust?

Andrew: Given the size of the field of Holocaust scholarship, we’ve had much great insight and lessons from that research. I don’t want to downplay its contribution at all. Part of the shadow of the Holocaust is an oversimplified understanding of what the Holocaust was because of the impact of seeing the Death Camps. That sticks with people and becomes how they define genocide. They ignore, for example, the destruction of synagogues and Jewish literature or the various ways the Holocaust served as a means for the mass theft of Jewish wealth. The Holocaust was a complicated event with diverse modalities of destruction at play within it.

From my interviews with Indigenous Elders and Leaders in BC, there was a distinct sense of what destruction meant from an Indigenous perspective. I don’t assume to fully understand it because I’m not grounded in an Indigenous worldview, nor do I have a deeply embodied understanding of Indigenous cultures. In doing my best to listen, it seemed that trying to force-fit Indigenous experiences into an interpretive grid, whether that’s built upon a Holocaust model or the United Nations Genocide Convention, was wrong. It seemed too limiting for fully understanding how these nations suffered assaults upon their being and their ability to reproduce themselves as groups. There was a need to open up the genocide concept to better address Indigenous experiences. This is not to suggest that the mainstream definition of genocide doesn’t fit Canada, only that it does not adequately capture the destruction.

Dylan: You’ve referred to symbiogenetic destruction in your work. Can you explain what that is?

Andrew: Genocide studies typically includes nature if someone destroys a group’s means of subsistence. It’s an instrumentalized understanding where the natural world exists to support the human group. Influenced by Indigenous scholars as well as work in the new materialisms, I understand genocide as targeting groups of humans who exist in constitutive relationships with the more-than-human world.

In Canada, I’ve focused on Anishinaabe and Cree relationships with water. Speaking to Elders, they explain that before Indian Residential Schools, a child’s family helped them initiate relationships with water based on respect, mutual responsibilities, and stewardship. Contrast this to Christian teachings about water at residential schools, such as Noah’s Ark where water is God’s punishment or Moses parting the Red Sea where water is something that humans control.

For residential school staff, water was a source of punishment and humiliation and a way to cleanse the perceived dirtiness of the ‘Indian.’ This included staff washing children’s mouths out. Sites of washing were also often sites of abuse and sexual violence against young children. Staff further manipulated the healing properties of water; Survivors recall how staff punished children for crying. Wetting the bed was likewise a reason for punishment and humiliation: children had to hold their bed sheet up in front of their peers in the refectory.

Residential school students, however, relied on water to resist. Hockey players recall skating on the ice and their feelings of freedom. Some children followed rivers when they ran away to their home communities. Water also played a role as a partner in trying to return to one’s Indigenous roots. Survivors return to water to heal, looking for sacred medicines within water. We’re rethinking genocide by centering more-than-human actors within processes of group destruction, recognizing their diverse roles in the perpetration of and resistance to genocide. 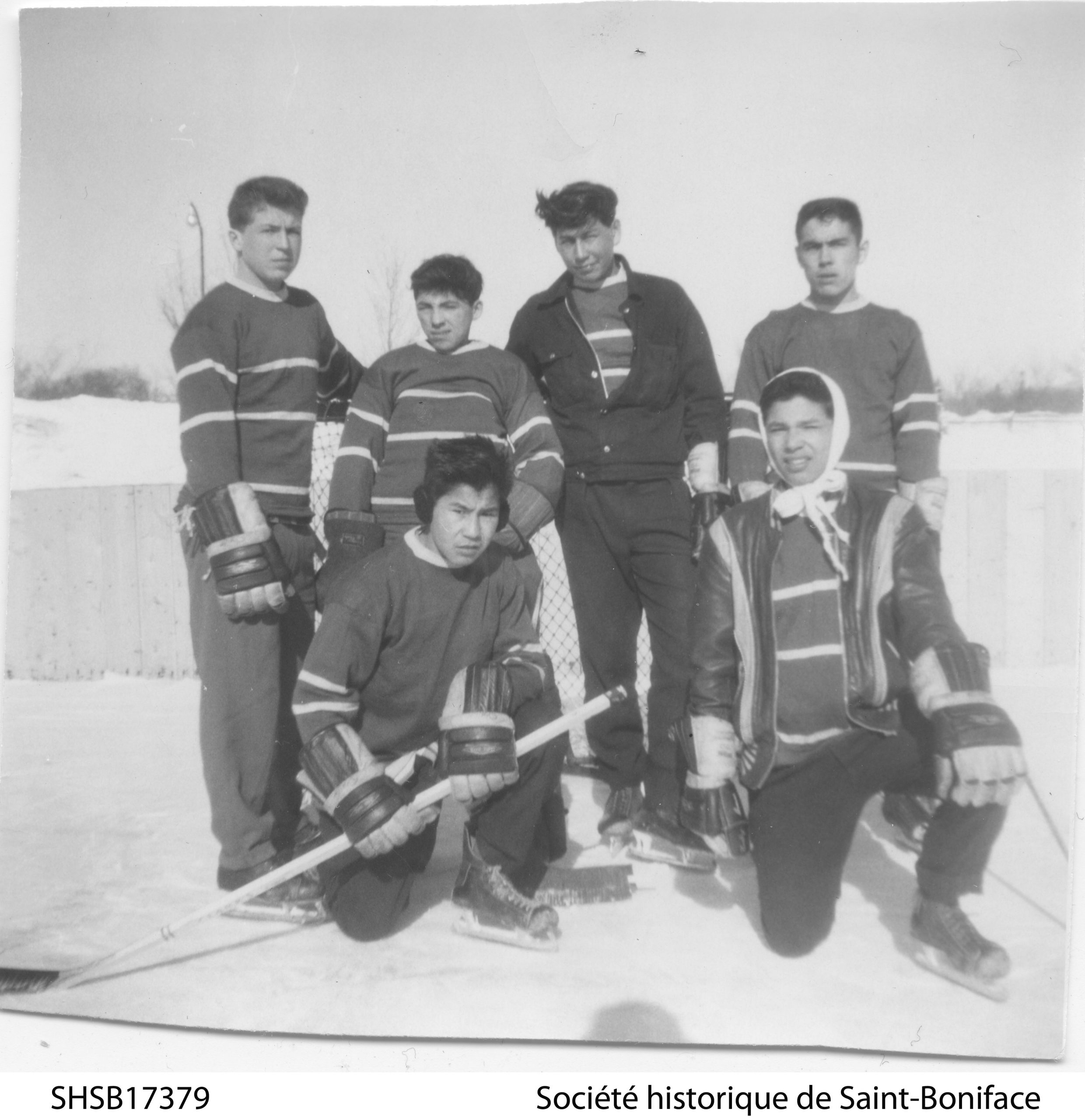 Members of the Assiniboia hockey team, seen outside in winter, 1959.

We’re calling this symbiogenetic destruction, because symbiogenetic means “becoming with.” You become who you are with others. There’s no essentialist identity that exists. We’re always beings in motion, beings who are becoming, and we do so with not only our fellow humans but also with more-than-humans.

Chris: How does your identity as a white settler scholar affect your approach to studying genocide?

Andrew: It’s been a learning process and an ongoing struggle. I ask myself, “Where does my role start and where does it stop?” Some of my friends are intergenerational Indian Residential School Survivors and this material is retraumatizing for them; they don’t necessarily want to engage with the insensitive sector of the Canadian public. I feel I have a role in speaking with settlers. I’ve also wanted to promote recognition of Canada as a case within comparative genocide studies since it’s often ignored by the broader international research community.

Then I try to focus my energy on not trying to ventriloquize Indigenous Peoples or to appropriate Indigenous Knowledges. Instead, I do one of the things a sociologist should, which is use our critical skills to interrogate how settler colonial institutions prevent justice for Indigenous Peoples. But that said, that doesn’t feel like enough. That’s part of the reason why I started doing community-based research. I was fortunate to have a close relationship with Elder and Indian Residential School Survivor Theodore Fontaine, former Chief of the Sagkeeng First Nation and author of Broken Circle: The Dark Legacy of Indian Residential Schools (2010). He passed away in May of 2021. Ted generously introduced me to his fellow Survivors. I’ve participated in some ground-level grassroots reconciliation that, I think, has the potential to serve as an example of how unsettled relationships can be shaped within Canadian society. 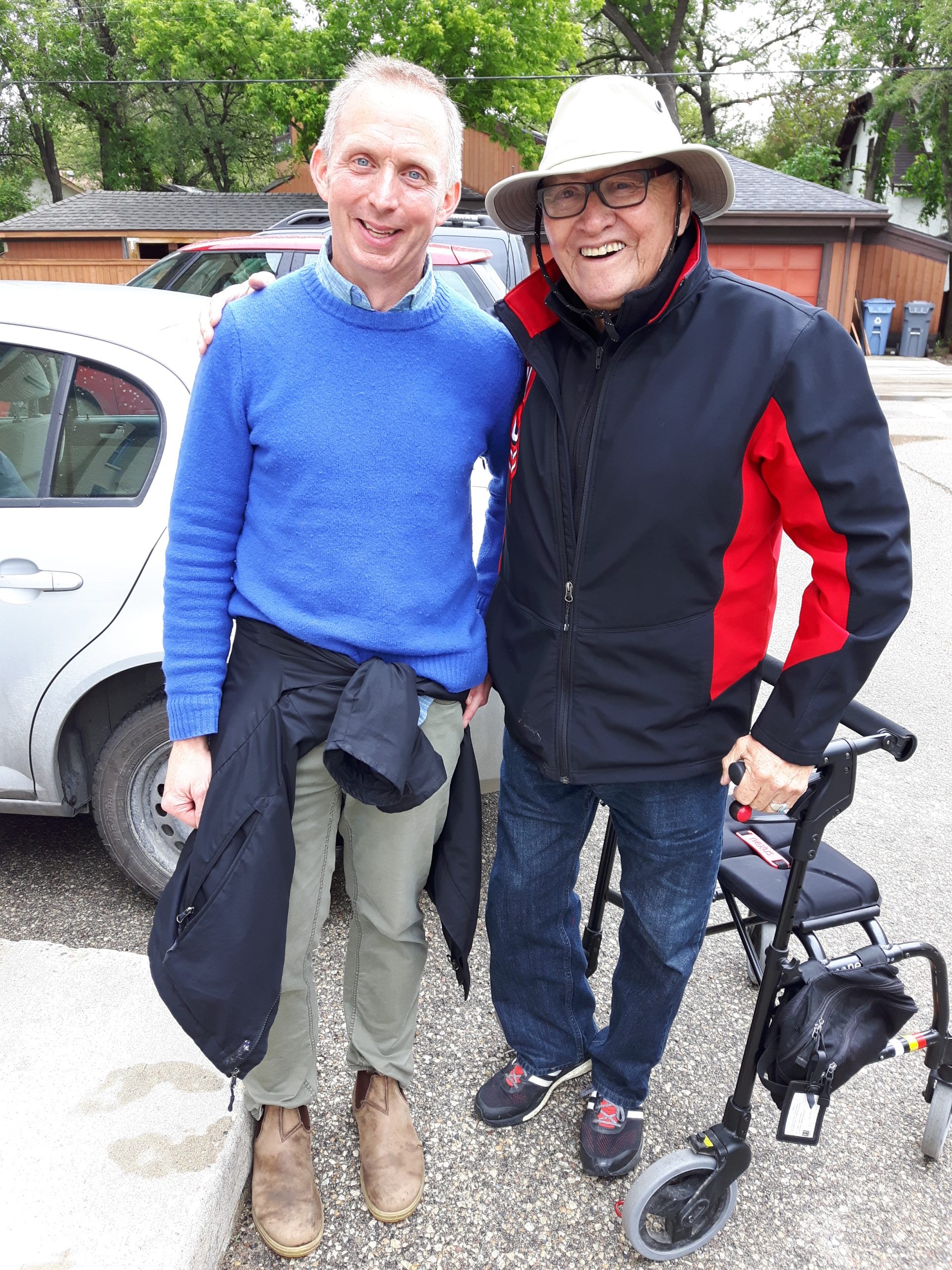 Theodore Fontaine and Andrew Woolford at the Assiniboia reunion, 2017.

Dylan: You write that the National Inquiry for Missing and Murdered Indigenous Women and Girls (MMIWG) provided a sophisticated legal analysis of genocide in Canada that injects Indigenous law and gendered perspectives into the conversation. Can you talk about that?

Andrew: In Canada, the gendered nature of genocide and the ways in which Indigenous women have been targeted for violence and how this violence has been neglected by police forces, governments, and the broader public demonstrates an ongoing assault upon the power of Indigenous women. The report is important because it provides a way to think about how gender can be an essential foundation that sustains the life of a group. We can also think about the way in which non-binary or two-spirited people might also be targeted in genocide, as some genocides impose strict gender orders. The report is also important because the MMIWG Society brings Indigenous legal orders into the conversation. According to John Borrows, Indigenous law is living law that seeks to always engage with its environment. I think there are important lessons from Indigenous legal orders that need to be brought into genocide law, which is often very slow to adapt to changing social and natural contexts.

Dylan: How have you navigated the emotional weight of studying genocide?

Andrew: While I would never try to compare trauma that I experience with that of the victims and survivors of genocide, it certainly is something you must contend with. I learned early on that I can’t read this material before I go to bed because I was waking up with nightmares. So, I changed that practice. I liked watching movies as cinematic representations of genocide were important to my thinking. But I simply stopped watching them because the visual was too impactful. I’m often surprised how I think I’m going to a superhero movie and then I find out it’s about genocide. Sometimes, I feel I can’t escape it even when I’m trying to find something that is escapist.

There are certain points where you must accept that you feel sad. Now, I embrace these moments; sometimes when I’m at a museum or at a commemorative site, I find tears come to my eyes. I’m quite relieved because the twin danger to trauma is desensitization. Because you’re exposed to so much traumatic material, you shut off emotions. I also try to take time to give thanks for my emotions because I want to continue to feel. I think that’s an important part of being able to connect, particularly in community-based research. Certainly, when you sit in a sunrise ceremony with Survivors or you feel the ceremonial drum, it becomes clear that emotion is important. I find the rituals that the Survivors share with me, like smudging, are very helpful in having a thoughtful practice for thinking about trying to cleanse yourself of some of the burden of these very distressing histories.

Dylan: We want to extend a deep thanks for speaking with us, Dr. Woolford.