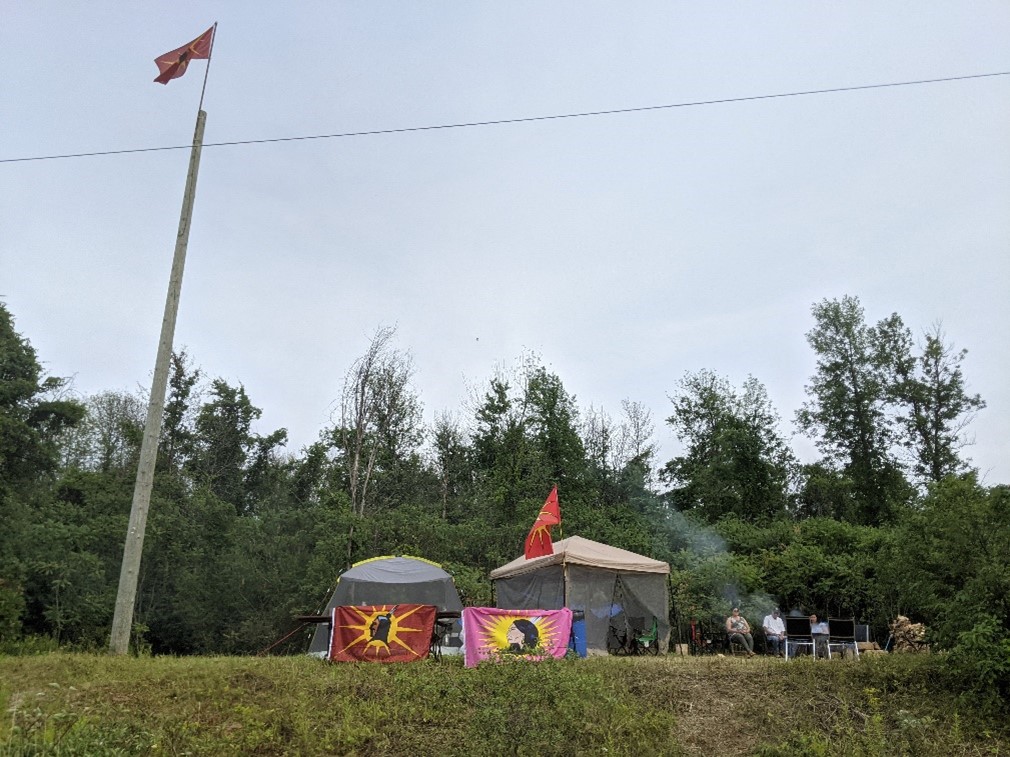 Non-Indigenous people who encounter Indigenous #LandBack protests are often surprised or taken aback. They may be angry about being inconvenienced on their commute and may even resort to racist stereotypes to explain what is happening. They might ask themselves questions like: Why are Indigenous people so upset? Why are they choosing to occupy land or block a road instead of writing letters to their elected representatives? To understand why, Canadians would do well to learn about the long histories of all the ways settlers have been taking Indigenous lands, and the centuries-long struggle of Indigenous peoples to defend their lands.

Take, for example the Kanehsatà:ke Resistance (Oka Crisis), which was a response to both the expansion plans of a golf course, but also to centuries of land theft and injustice in both Kanehsatà:ke and Kahnawà:ke. This is also true of the many other actions by land defenders in so-called Canada, and around the world, including more prominent ones like Land Back Lane (at Six Nations of the Grand River) and the Wet’suwet’en defense against unauthorized pipeline construction on their lands in so-called British Columbia. Another such action has been happening since the summer of 2021 in Kahnawà:ke, a Kanien’kehá:ka (Mohawk) community near Montréal.

In April 2021 the city of Châteauguay, which borders Kahnawà:ke, gave the green light to a new development of 290 housing units on land that historically belonged to Kahnawà:ke and was never ceded. The Kanien’kehá:ka Nation at Kahnawà:ke strongly opposed this development as one that “further usurps lands that rightfully belong to Kahnawà:ke.”[1] According to a Longhouse press release:

The western boundary of the territory of Kahnawà:ke originally extended to the Wolf River (now called the Chateauguay River), an estimated 9-square mile zone that has been wrongfully occupied by Chateauguay. Since the fall of New France in 1760, numerous petitions were made to the succeeding British Regime from Kahnawà:ke complaining about breeches to our territorial integrity and encroachment along the western boundary.”[2]

The Mohawk Council of Kahnawà:ke also communicated its opposition to the project to the Chateauguay mayor, Quebec Premier François Legault, and Crown-Indigenous Relations Minister Carolyn Bennett, but the letters had little impact. On July 1, 2021, after it was clear that all protests had been ignored or dismissed, a group of Kahnawa’kehró:non set up an encampment to try to stop the development, and this land defense continues to this day.

The mayor of Chateauguay at the time, Pierre-Paul Routhier, when asked if the federal government should buy the disputed land and return it to Kahnawà:ke, said no. “I would do everything I could in order to block it,” he said, “I want it to be used as a buffer. I want our people, our people – we’re more than 50,000 population here – to know that they will be able to live in peace.” Routhier’s outright hostility, his us-versus-them language, came as no surprise to Kahnawa’kehró:non (people of Kahnawà:ke) who are well acquainted with the racism and threats of their non-Indigenous neighbours. It was another moment in a long series of events in which settlers framed Kahnawa’kehró:non as hostile and unreasonable while they took Kahnawà:ke land.

Kahnawà:ke is a Kanien’kehá:ka community, nation, and part of the Rotinonhsión:ni (Haudenosaunee) confederacy, with a storied history that long predates Canada. When Britain defeated France in the St. Lawrence Valley in 1760, Britain promised at the Treaty of Oswegatchie (confirmed at the Treaty of Kahnawà:ke) to respect all pre-existing treaties and agreements with Indigenous people.[3] For Kahnawà:ke, that meant that their existing lands, just upriver from Montréal, would be maintained and protected as they had been before British conquest. But Jesuit priests decided to use the cover of post-war chaos to illegally concede hundreds of acres of Kahnawà:ke lands to settler farmers.[4] When Kahnawà:ke leaders appealed to the British governor to stop this, his government investigated and found that that the Jesuits had acted illegally and that Kahnawa’kehró:non were the rightful possessors of the land. Much to the consternation of Kahnawa’kehró:non, however, the colonial government did nothing to undo the wrong.[5]

The colonial government commissioned a surveyor to determine the eastern boundary of Kahnawà:ke, but only months later, government officials handed over a large strip of land (approx. 10 km by 2 km) to the neighbouring Jesuit seigneurie without providing any justification.[6] Kahnawà:ke leaders bitterly disputed this, also protesting the fact that neighbouring farmers routinely moved boundary markers, and that someone had fraudulently moved a main boundary marker so that a valuable grist mill could be included in the land owned by the Jesuits.[7] Numerous investigations and court cases ensued over the following years, but by 1869 the colonial government had officially handed over the strip of land to the Jesuits.[8] Over the next fifty years, Kahnawà:ke repeatedly sued, petitioned, and argued to have the land returned to them. In the decades following 1800, when the Crown seized all Jesuit estates and all subsequent litigation would be against the Crown, Kahnawà:ke sent multiple delegations to London to ask the monarch to help them have their land returned.[9] To no avail.

At the same time, white people continued to settle in Kahnawà:ke illegally, often with the tacit or overt support of the Department of Indian Affairs. Additionally, more and more non-Indigenous farmers refused to pay rent on Kahnawà:ke land they occupied under seigneurial tenure. Of all the petitions from Indigenous people in the St. Lawrence Valley in the British colonial period, more than a third concerned land and territory, and many of these came from Kahnawà:ke.[10] In other words, Jesuits illegally ceded huge extents of Kahnawake land, the owners of neighbouring seigneuries frequently moved boundaries in their favour, and white people were able to live inside Kahnawake territory and own land. Colonial governments let it happen and sometimes encouraged it. The territorial integrity of Kahnawake has been under attack for centuries.

Meanwhile settler farmers also regularly moved boundary markers in their favour on the western side, the same boundary that Kahnawa’kehró:non are contesting with their occupation today. Kahnawà:ke leaders had often accused the Grey Nuns, owners of the neighbouring seigneurie, of encroaching on their lands. Chiefs protested the location of that boundary since at least 1762 when it was surveyed as a line that cut through fields cultivated by their people.[11] The boundary was marked with a large limestone marker inscribed “G.R. III” (King George the Third) and “Honi soit qui mal y pense” [Evil be to him who evil thinks].[12] (Fig. 2) That survey deprived Kahnawà:ke of at least ten acres of land, which Kahnawa’kehró:non had used and occupied for many years. The western boundary was resurveyed in 1773, but neighbouring settlers continued to contest and alter the boundary.[13] In 1807, Kahnawake leaders publicly demanded the return of St. Bernard Island, a 250 acre island on the western boundary, formerly under cultivation by Kahnawà:ke farmers, explaining that the religious order had gained ownership through trickery.[14] In 1846 Kahnawà:ke leaders again asserted their claim to all of the land between Kahnawà:ke and the Châteauguay River.[15] 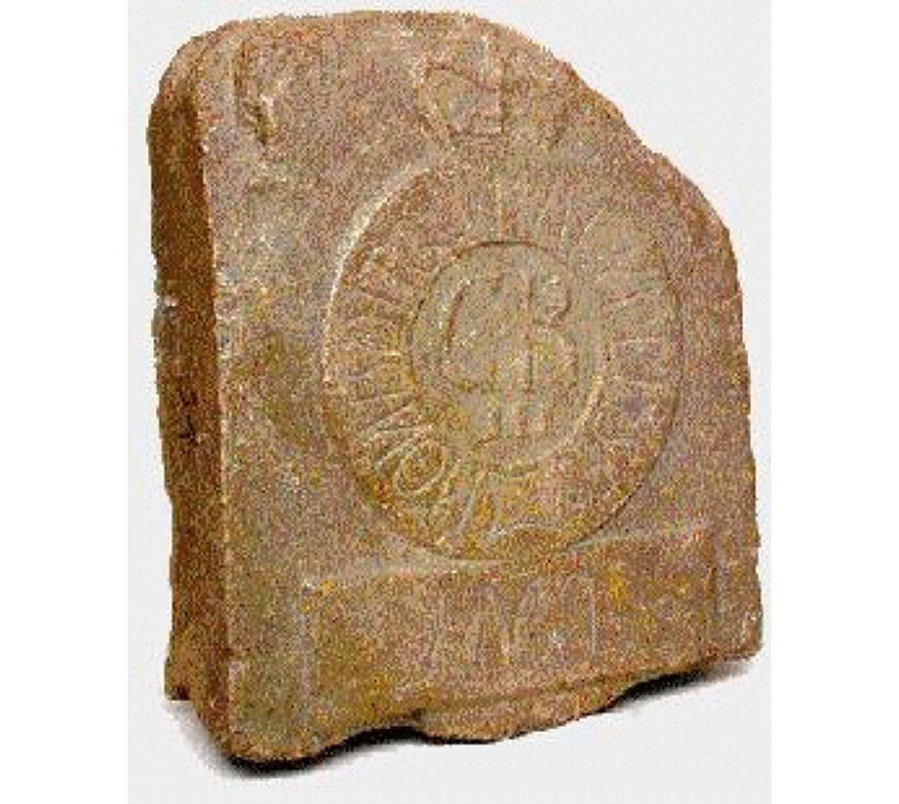 After decades of demands from Kahnawà:ke leaders to have their border corrected and clearly defined, [16] the Department of Indian Affairs reluctantly agreed to survey it in 1880, but the young, inexperienced surveyor hired by the department, William McLea Walbank, did a poor job. He was in a hurry to get on with other work that the department saw as more important: surveying property boundaries inside Kahnawà:ke in preparation for the enfranchisement and elimination of the entire community.[17] Even so, he confirmed what the chiefs had been saying: that settler farmers on the boundary had been moving boundary markers every spring for a long time.[18] On the western boundary, Walbank said the farmers had encroached on Kahnawà:ke land for a total of at least twenty acres.[19] But Walbank did nothing to protect Kahnawà:ke land from the ongoing theft. In fact, it was revealed later that Walbank never finished running the lines he had been paid to run, and instead simply drew dotted lines on his map to show the approximate border.[20]

In 1894, after the DIA realized that Walbank’s notes from the 1880 survey were worthless, and after more demands from Kahnawà:ke leaders, the Department finally sent its own surveyor W.A. Austin to define the boundary. On the western boundary he noted the presence of the same limestone marker that had been placed in 1762, and drew a sketch of it in his field book (Fig. 3).[21] He wrote that the marker had been knocked from its stone foundation. Sixty years later in 1957, the Quebec Land Surveyor Gaston Bolduc came across the foundation of the marker and recorded that he found the top of the tablet under a nearby cottage.[22] How did the huge stone end up under that cottage? We don’t know. In the 1950s, Dominion surveyors were given special permission to collect and preserve certain historic markers from across the country, so perhaps that is how that marker became part of the collection of the Canada Science and Technology Museum in Ottawa.[23] 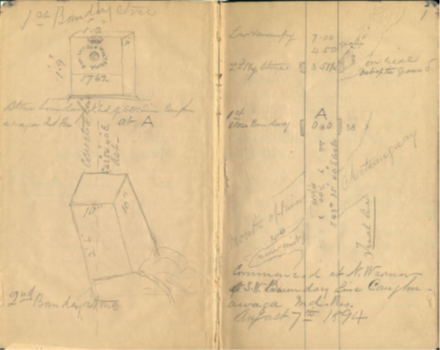 The boundary marker, of course, is much less important than the boundary itself. For generations of Kahnawa’kehró:non, the frequent illegal and so-called legal boundary breaches and movements have represented an existential threat to the future of their nation. The traditional territory of the Kanien’kehá:ka stretches from today’s Montréal to Pennsylvania, and Kahnawà:ke land is just a tiny portion of that. Yet even this small territory has been under constant attack for centuries, as settlers and settler governments have chipped away at its boundaries. No wonder then, that one response of Kahnawà:ke land defenders is to proclaim “Not One More Inch.” (Fig. 4) When non-Indigenous people encounter Indigenous #LandBack protests, it’s tempting to reach for familiar racist stereotypes and to focus on how their actions inconvenience us at that moment, but it’s important to resist those instincts and to inform ourselves about the long history of injustice that informs these protests. 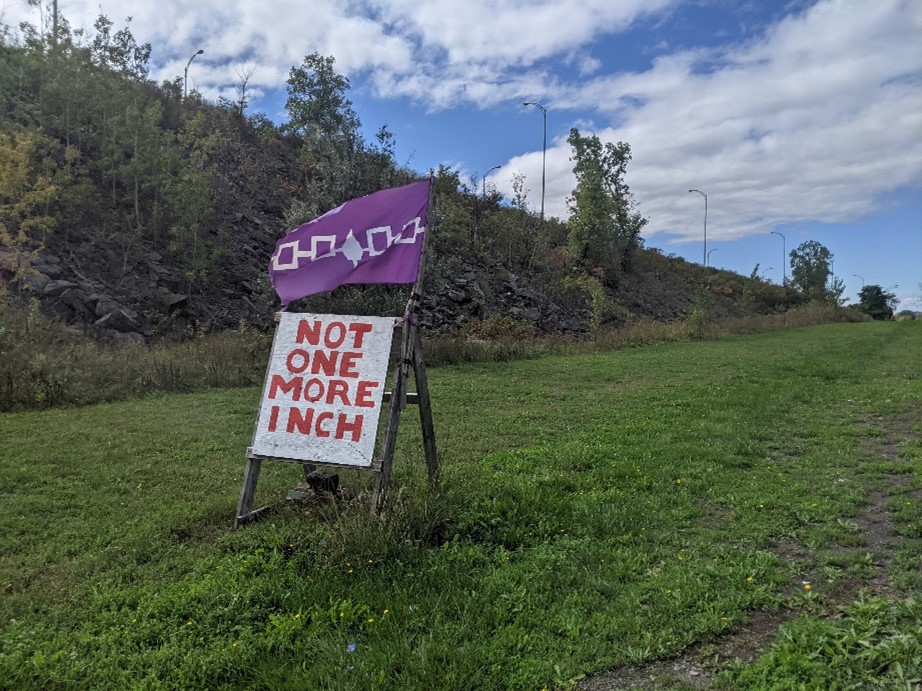 Daniel Rück is Assistant Professor in the Department of History and the Institute of Indigenous Research and Studies at the University of Ottawa, unceded Algonquin territory. For more on the history of the Kahnawà:ke-Canada relationship, check out his new book, The Laws and the Land: The Settler Colonial Invasion of Kahnawà:ke in Nineteenth-Century Canada

Acknowledgements: Many thanks to Sarah Rotz, Teiowí:sonte Thomas Deer, Kahrhó:wane Cory McComber, and David Pantalony for their feedback in preparation for this article.

[6] Holmes, v. The strip was estimated at 37 arpents by 2 leagues – the conversion I have given here is very approximate.

[17] Daniel Rück, The Laws and the Land: The Settler Colonial Invasion of Kahnawà:ke in Nineteenth-Century Canada (Vancouver: UBC Press, 2021), Chapter 6.

[23] Many thanks for David Pantalony, Curator at the Canada Science and Technology Museum, for sharing information about this boundary marker and the larger collection.

Hill, Susan M. The Clay We Are Made Of: Haudenosaunee land tenure on the Grand River. Winnipeg: University of Manitoba Press, 2017.

Lambert, Carmen. History of Kahnawake Land Claims, Seigneury of Sault-Saint-Louis: paper prepared for the Confederation of Indians of Quebec, 1980.

Pantalony, David. “Collectors, Displays and Replicas in Context: What We Can Learn from Provenance Research in Science Museums.” In The Romance of Science: Essays in Honour of Trevor H. Levere, edited by Jed Buchwald and Larry Stewart, 255-275: Springer, 2017.