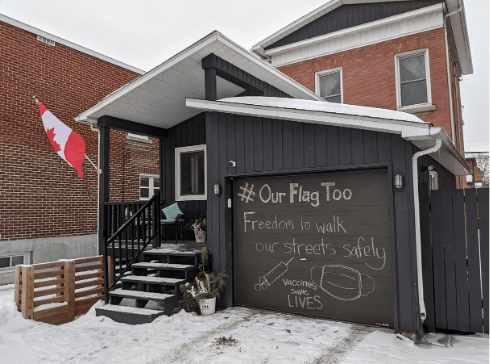 The first time a Canadian maple leaf appeared on a flag, it was flown in the final days of a violent protest. At the Battle of Saint-Eustache in 1837, Patriote fighters carried a white banner charged with a Maskinongé fish, pinecones, the initials “C” and “JB” (for “Canada” and “Jean-Baptiste” respectively), and a branch of green maple leaves. To its creators, this makeshift maple-leaf flag was a symbol of patriotic resistance to British colonial oppression.

I draw no equivalence, of course, between the anti-colonial cause of the Lower Canadian Patriotes and the various grievances of the so-called “Freedom Convoy”. But the use of maple leaf flags unites these two movements. Like many Canadians generally and Ottawans specifically, I have found the use of the Canadian flag during the recent anti-vaccination mandate demonstrations unsettling. Yet as an historian who studies past flag use in Canada, I also see historical echoes and continuities in the demonstrators’ use of the national emblem. Considering the history of Canadian “flag culture” – the circumstances in which societies display their flags and the rules and rituals that surround this use – helps us make sense of the demonstrators’ American-style deployment of the flag, and the evolving political resonance of our most familiar national symbol.

The Saint-Eustache example aside, maple leaves were not the protest emblem of choice before Confederation. That distinction went to more explicitly “revolutionary” flags, such as the French tricolour – a favourite among the Patriotes – and American-inspired banners – the preference of radical Upper Canadian reformers such as William Lyon Mackenzie. These choices hinted at republican notions of freedom that shocked and frightened colonial authorities.

The use of foreign flags and “partisan” banners at political demonstrations exposed participants to accusations of disloyalty. In the aftermath of the Rebellions, James Hamilton urged attendees at an 1839 political meeting in Halton County, Upper Canada, to refrain from displaying any flag other than the Union Jack, “the flag, that, while it has secured for us the privilege, affords us protection in all lawful assembling.” In Hamilton’s view, displaying the Union Jack alone provided legitimacy and protection to political demonstrations. 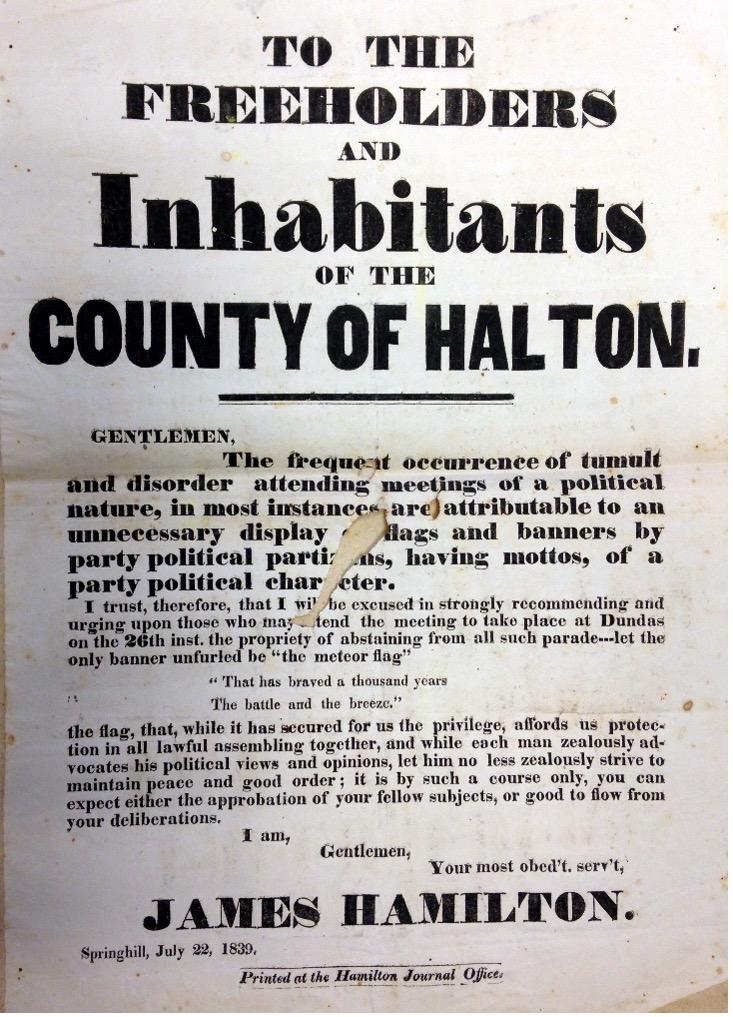 Foreign flags such as the Stars and Stripes did become less conspicuous in political gatherings over the course of the nineteenth century. What’s more, some Canadians objected violently to any display of American flags on Canadian soil and waters, whether on the homes of American citizens, on American consulates and merchant ships, and as decoration. However, many more Canadians chose to emulate American practice, and used national flags to express a variety of identities, interests, and opinions. Over the twentieth century, Canadian flag culture became more and more American.

Flags in schools were a case in point. In 1906 and 1907, four provinces followed the example of some nineteen American states and territories and mandated the display of national flags over public schools. The stated purpose of school flag display, in Canada as in the United States, was to assimilate recent immigrants. As if its American inspiration wasn’t obvious enough, New Brunswick even prescribed a daily pledge of allegiance – “Emblem of Liberty, Truth and Justice – Flag of my country, to thee I bow” – accompanied by a salute. 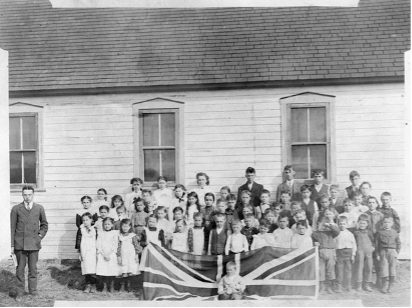 School flag debates illustrated not only American influence over Canadian patriotic practices, but also the power of flag policies as a partisan wedge issue. In 1907, Manitoba Premier Rodmond P. Roblin ran a re-election campaign on his proposal to make display of the Union Jack a condition for school boards to receive provincial education grants. The choice of which flag to fly was itself a partisan consideration. Although the division was not perfect, Conservatives tended to favour the official “state flag”, the Union Jack, while Liberals preferred the Canadian Red Ensign, an unofficial “citizens’ flag.” In New Brunswick, a Liberal government legislated Red Ensign display on schools in 1907 only to see their Conservative successors amend the law in favour of the Union Jack in 1910. In British Columbia, where the flag question was a proxy for a dispute between local and provincial authorities over public education, some school boards rejected government-issue Union Jacks in favour of Red Ensigns for their schools. 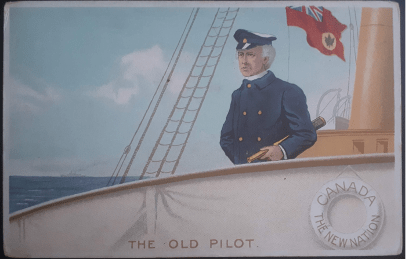 By the 1960s, however, loyalties had shifted. Conservatives had come to embrace the Canadian Red Ensign, the country’s official, if temporary, national flag after 1945. To its supporters, the Ensign represented membership in the British Commonwealth and the service of Canadian soldiers under the flag during two world wars. In 1964, when Liberal Prime Minister Lester B. Pearson announced his intention to replace the Red Ensign with a distinctive flag, the ensuing debate was emotional and, at times, acrimonious.

Parliament’s adoption of the National Flag of Canada did not immediately soothe the division. Conservative governments in Ontario and Manitoba promptly designed provincial Red Ensigns in protest. For some Canadians of a certain generation, the Ensign remains a nostalgic symbol today. More ominously, even before the adoption of the maple leaf flag, the Ensign enjoyed a fringe following among white supremacists, which persists to this day. The Ensign even showed up during the Freedom Convoy demonstrations, draping the shoulders of a self-proclaimed “Shaman of Canada.”

Slowly but surely, the maple leaf flag won over most of the reluctant. Although the Liberal Party remained champions of the red-and-white – witness Jean Chrétien and Sheila Copps’ free flag giveaway in the 1990s – Canadians of other political persuasions have also embraced it. In 1998, several MPs from the right-wing and populist Reform Party waved the flag in the House of Commons and circled Parliament Hill in flag-festooned cars, horns blaring, in response to Bloc Québecois complaints about the prevalence of Canadian flags at the Nagano Winter Olympics. One newspaper accused the Reformers of weaponizing the flag. In hindsight, although the message was different, these loud and brash methods look like a “Freedom Convoy” in miniature.

This brings us back to the Convoy demonstrations and what they say about flag culture in Canada. Demonstrators unfurled a variety of flags and banners, including Confederate and Nazi emblems, the American Gadsden Flag (“Don’t Tread on Me”), as well as, curiously, the flag of Guyana and a multipurpose Australian protest emblem, the Eureka flag. Provincial flags, especially the Quebec Fleurdelisé, were also in evidence, and the Métis flag made at least one appearance. However, the Canadian flag dominated. This was not merely a reflection of participants’ patriotism, but a strategy to legitimize the movement’s goals and deflect criticism – and perhaps even shield the demonstrations from law enforcement. It is almost as though the Convoy leaders had read James Hamilton’s 1839 broadside, and hoped that by fulsome patriotic display they might win “the approbation of [their] fellow subjects [or citizens].”

To some observers, the Convoy’s use of the Canadian flag smacks of imported American practice. This is true, but it is also nothing new: Canadians have mimicked elements of American flag culture for well over a century. The enthusiasm for the flag from a right-wing and populist movement does seem novel, particularly when the flag is displayed alongside anti-Trudeau slogans, as the National Flag of Canada was, of course, a project of Trudeau’s party. The Canadian Red Ensign might seem a more appropriate emblem for far-right opposition to a Liberal government, just as the Gadsden and Confederate flags have become favoured far-right emblems in the United States, but very few Ensigns appeared amid the hundreds of maple-leaf flags. Some Canadians have concluded from this that the national flag has been co-opted by the populist fringe and have opted not to display the flag.

Yet we have also seen an impulse to “reclaim” the flag. An overwhelming majority of Canadians do not support the Freedom Convoy’s objectives, and many opponents of the Convoy have resisted this far-right minority’s efforts to define the national flag. During the “Battle of Billings Bridge” on February 13, when Ottawa residents blocked new Convoy supporters from joining the downtown occupation, both sides flew Canadian flags. Residents have also spontaneously displayed Canadian flags on their homes, accompanied by slogans such as “Our Flag Too” and more explicitly anti-Convoy messages.

The Canadian flag is a flexible emblem, capable of representing at once a populist fantasy of unrestricted “freedom” and the more mainstream values of peace, order, good government, and community responsibility. In countries with much longer traditions of flag use than Canada, such as the United States, few citizens are shocked to see their national flag used by parties and movements across the political spectrum, even at the extremes. Paradoxically, overtly partisan use of the flag suggests its acceptance across partisan lines – a sign of a national symbol’s maturity.

Yet even in Canada, flags have long been political tools, and often partisan ones. Disagreements about its meaning speak not to a symbol’s weakness but to its power and vitality.  If something positive has come from the Freedom Convoy’s flag practices, it is a thoughtful discussion of national symbols, what they mean, and whom those meanings include and exclude. Acknowledging the history and politics of the Canadian flag may yet allow Canadians to reimagine the flag in ways that are more meaningful and more inclusive of all citizens.

Forrest Pass is a curator in the Exhibitions and Online Content Division at Library and Archives Canada and a vexillologist, or flag historian. His work on the history of flags and other emblems has appeared in the Canadian Historical Review, Raven: A Journal of Vexillology, the Journal of American Studies, and the Canadian Parliamentary Review.