*Bernie Langille Wants to Know What Happened to Bernie Langille has its World Premiere on Saturday April 30 at 8:30 at TIFF Bell Lightbox 4 as part of Hot Docs. You can also watch online from anywhere in Canada for 5 days starting May 1. 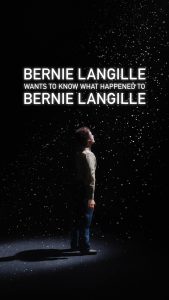 On a cold February night in 1968, Bernie Langille drove his friends to play darts and have a drink at CFB Gagetown. The next morning, his wife found him bloody and bruised in bed without knowing what happened. He was taken to the base’s hospital where it was recommended he be flown to Halifax for immediate treatment. After a 4-hour delay in ordering the flight, an assault by one of the doctors, and his ambulance being in a collision with a train, he finally made it to the hospital in Halifax, but it was too late. The rather unusual circumstances of Langille’s death led to many questions for his family and speculation by the community. Over 50 years later, the deep pain remains for the Langille family and has led Bernie Langille’s grandson – also named Bernie – to revisit his grandfather’s death in a search for truth and healing.

This journey is profiled in Bernie Langille Wants to Know What Happened to Bernie Langille, a new documentary by director Jackie Torrens and her team at Peep Media. Following the junior Langille, the film highlights both the challenge of finding the truth along with the family’s struggle to come to terms with not only what happened, but their own stories of that night. As those stories are challenged by new information, the viewer is left to contemplate questions of truth and trust and how the unknown can wreak havoc on our relationships.

The film also relies on remarkable recreations of that night in 1968 using miniature figures. This allowed Torrens and her team to beautifully inform the audience while also visually representing the fragments of information the family had access to through years. Not so much a whodunnit, but, as Torrens says, a whatdunnit, the film explores the generational pain of a traumatic event and the various ways a family has tried to cope.

In this episode of the History Slam, I talk with Jackie Torrens about the film. We discuss the hard to believe elements of Langille’s death (9:42), the emotional toll of challenging the family’s memories and ‘truth’ (13:37), and the decision to present new information to Bernie on camera (18:20). We also chat about some of the incredible documentation they found (23:43), doing recreations in miniature and the resulting challenges in filming (33:39), and managing audience expectations in a true crime documentary (37:10).