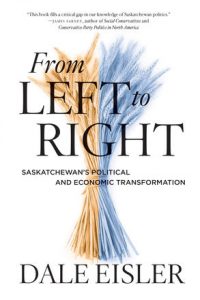 n the past two years, 7 provinces and territories have held elections, with Quebec and Ontario holding campaigns this year. And if that wasn’t enough, Jason Kenney’s resignation earliere this week further thrust provincial politics into the news. While campaigns and leadership changes generate plenty of interest, the pandemic has served as an important reminder of just how influential provincial/territorial governments are in our daily lives. At the same time, following provincial politics outside where you live, in particular during election campaigns, offers a great lens into local priorities and cultural differences across the country.

A particularly interesting trend in provincial politics has been Saskatchewan’s shift from left to right through the second half of the 20th century. The province of Tommy Douglas, who served as Premier from 1944 to 1961, had CCF and NDP premiers for the majority of the time between 1944 and 2007, with Grant Devine (1982-1991) the only Progressive Conservative premier in that era. That changed in 2007, however, when Brad Wall won the first of his three majority governments leading the Saskatchewan Party. The party won a comfortable majority again in 2020. This transition has been mirrored at the federal level, as the Conservative Party won all 14 of the province’s ridings in the 2021 election.

That shift in Saskatchewan’s political outlook is the subject of Dale Eisler’s new book From Left to Right: Saskatchewan’s Political and Economic Transformation. As the title suggests, Eisler, a long-time journalist who has also worked in the federal government, examines the causes of the province’s shift to the right of the political spectrum. From demographic changes to the transformation of agricultural industries to the economic power of energy production, the policy priorities of Saskatchewan voters have changed significantly over the last 70 years. Eisler not only traces these changes but also effectively engages with what these provincial shifts can tell us about political trends across the country.

In this episode of the History Slam, I talk with Dale Eisler about the book. We discuss Tommy Douglas’ rise to power and the generational shift that followed (10:17), the rise of rural populism in the 20th century (14:53), and how rural economic changes shaped the provincial political landscape (22:46). We also chat about the rise of the Saskatchewan Party and what has made it effective (30:15) and whether Saskatchewan politics foreshadows what happens at the federal level (36:40).You can find Dale’s other book, False Expectations, here plus more on his novel Anton and the subsequent film adaption here.

Sean Graham is a historian of Canadian broadcasting, an Adjunct Professor at Carleton University, and a contributing editor to Activehistory.ca