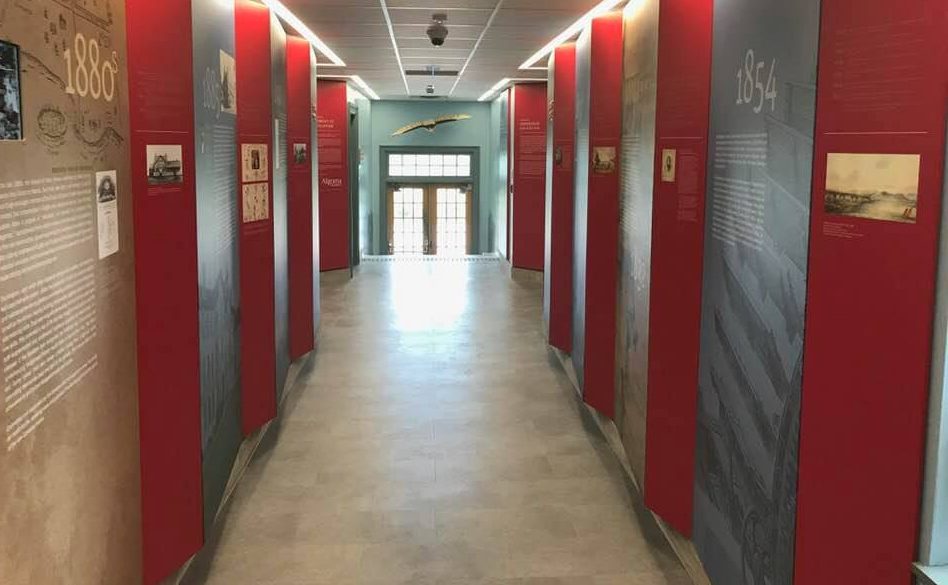 The Shingwauk Residential School operated in Sault Ste. Marie, Ontario from 1874 to 1970. In 1971, Algoma University College – today known as Algoma University – moved onto the Shingwauk Site. Since 2010, I’ve been part of the staff at the Shingwauk Residential Schools Centre (SRSC) that seeks to promote sharing, healing, and learning in relation to the legacy of the Shingwauk Site. My work involves caring for the archival collections of the SRSC, community outreach and access work. My role has changed a number of times since 2010, but the public education focus of my job continues to be present.

Before going any further, I’d like to highlight that none of the work of the SRSC would be possible without the guidance and work of the Children of Shingwauk Alumni Association (CSAA). The CSAA is a group of Survivor and intergenerational Survivors associated with the Shingwauk Site, who have been working to support Survivors and promote education since 1981. I am incredibly grateful to work alongside the CSAA.

In this post, I am reflecting on how the SRSC’s outreach and education programming has shifted over the years. When I began working at the Centre it was common to have school and professional development groups visit who knew nothing or very little about Residential Schools. Likewise, it wasn’t unusual to meet people from Sault Ste. Marie who had no idea that there was a Residential School site located in the city.

Given this changing landscape of awareness, how has the SRSC’s programming adapted and changed since 2010? From 2010-2015 the most common format of learning offered to visiting groups involved a powerpoint presentation that described Residential Schools and the history of the Shingwauk Site, combined with a historical site tour. When possible, the presentation and site tour were paired with a talk by a Survivor, discussing their personal experiences at Residential School.

By 2015, the historical presentation was dropped for most groups and historical context was instead added into the site tour itself. Additional learning activities were also added for younger visitors. For example, the Project of Heart learning activities were often included when working with elementary or high school aged visitors. Project of Heart encourages participants to reflect on Residential Schools in a creative way and create a small commemorative tile dedicated to a Residential School Survivor.

One of the limitations of the Shingwauk public programming prior to 2019 was how rooted in place it was. It was only accessible to those who could make the trip to Sault Ste. Marie.  Funded by a Digital Museums of Canada grant, the SRSC has embarked on the creation of a virtual historical site tour to allow for the sharing of the Shingwauk history more broadly.  Though still under development, this virtual tour has greatly extended the reach of the SRSC’s public programming – with groups from Southern Ontario and other provinces now being able to participate. This virtual tour has also been heavily used since the start of the pandemic, offering an alternative to gathering in-person. Requests for virtual engagement with the Shingwauk site were particularly high around the first National Day for Truth and Reconciliation in 2021.

So what is next? The Shingwauk site tours are currently on pause as staff work with the Children of Shingwauk Alumni Association and other stakeholders to further centre Indigenous voices and experiences in all SRSC public programming. I look forward to seeing how this new iteration of learning looks.

In addition, the expansion of the Reclaiming Shingwauk Hall exhibition into a larger auditorium space is underway and scheduled to open in 2022. This part of the exhibition will be more art driven, participatory, and aims to contextualise Residential Schools in the broader history of colonialism and decolonization. This expansion will once again fundamentally change how the Shingwauk site is experienced by visitors. It will allow for a more fulsome museum-like experience and a further expansion of interpretation by staff.

It’s important to recognize that public programming cannot be static. Public historians and museum educators are constantly working to refine and improve public programming. Education and outreach programs need to adapt to changing historical interpretations and to changing public awareness.

Krista McCracken is a Researcher/Curator at the Shingwauk Residential Schools Centre. They are an editor at Activehistory.ca