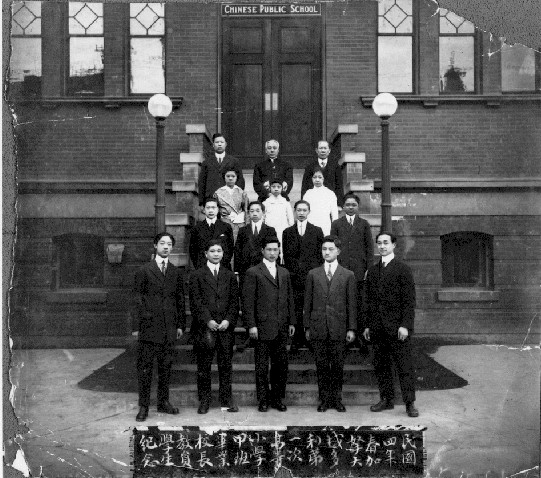 On September 5, 2022, over 600 people in Victoria, BC, commemorated the 100th anniversary of the beginning of the Chinese Students Strike. Participants included a Chinese Canadian veteran of the Second World War, the Police Chief who helpfully stopped traffic, two BC Government ministers–one of whom, the Attorney General, read the Premier of British Columbia’s message of support–the mayor of Victoria who condemned the racism of past and present, and the President of the Victoria Chamber of Commerce who made a moving apology for its role in school segregation. The event concluded with the Chair of the Victoria School Board reading aloud the Board’s formal apology to the Chinese community and presenting a commemorative plaque to the President of the Chinese Consolidated Benevolent Association, the umbrella organization of Victoria’s Chinese community. This antiracist solidarity begins 100 years earlier.

On September 5, 1922, the principals of Victoria’s elementary schools began calling Chinese students out of their classes, lining them up, and marching them down the road. The Victoria School Board had ordered the segregation of the Chinese, and of the Chinese only, because they supposedly needed special instruction in English. In fact, the trustees like most other Victoria residents believed that the Chinese were aliens who did not belong in Canada, let alone in classrooms with white students. As one trustee explained, “the mixture of white and Chinese students in the public school is abominable.”

However, things did not go according to plan. As the Victoria Daily Times reported, when Major Jeffree Cunningham, the principal of the Boy’s Central School, and his charges reached the segregated King’s Road School, “A Chinese boy holding the reputation of being the quietest and most studious in the class shouted something in the Oriental lingo, and like a flash the parade disbanded, leaving Principal Cunningham in the middle of the roadway and wondering how he would overcome the difficulties of the situation.” Similar events unfolded with the students from the other schools. The Chinese residents of Victoria had organized a student’s strike to protest the school board’s racist actions. Students racialized as Chinese were being singled out for segregation. Eighty-five percent of the 240 striking students were Canadian born, many were third generation and some fourth generation Victorians. Many spoke English as their first and only language. Above all, the Chinese were no more and no less alien to Victoria than were any other non-Indigenous people.

Three factors shaped the strike. First, as the Chinese in 1922 well knew, racism was not just the isolated and individual prejudices of the school trusties. It was a social structure that circumscribed their lives at every turn, a structure whose creation was an integral part of the settler colonial project of making British Columbia and Canada as the white man’s land. This project involved converting the territories of Indigenous people into the private property of people of European and especially British origins, while keeping other property owners out. The Chinese, along with Indigenous people, Japanese and South Asians, were excluded from participating in the Canadian state system. They could not vote in elections at any level in BC. The Chinese and Indigenous people were barred from pre-empting land. The Chinese could not work for provincially incorporated companies or the BC government. Popular violence closed entire districts to them, while provincial school curriculum taught not only that they were biologically different from whites but that they were “visitors” to Canada. Meanwhile the head tax on Chinese immigration blocked Chinese workers from bringing their families over from China. The Chamber of Commerce, the Retail Merchants Association, the Great War Veterans Association, the Women’s Christian Temperance Union, and most trade unions supported their segregation. Segregating the Chinese was easy politics for the trustees.

Second, the strike was maintained by the strong support of the Chinese community, most of whose members were workers who did not have children in schools. Since the time of their arrival beginning with the 1858 Fraser River Gold Rush, the experience of racist violence and exclusion had forced the Chinese to build their own institutions, banding together for mutual protection and support in ways that transcended their differences of language, home county, family lineage, time of arrival and politics. Most important was the Chinese Consolidated Benevolent Association, formed in Victoria in 1884 and which the late historical geographer David Lai has correctly called a Chinese local government. By 1886 most Chinese in BC were its members, and its authority was tacitly recognized by Canadian officials. In 1922, the CCBA mobilized the support of the broader Chinese community for the strike, not only in Victoria, but in Vancouver and elsewhere in Canada, explaining that if school segregation was allowed to stick, worse restrictions would follow. It raised more than $16,000 (over $250,000 today) to support the strike and in November even opened a free Chinese language school for the striking students at the Chinese Public School. As it warned the board in February 1922, segregation would be opposed by “the whole of the Chinese people.”

Third, locally born second and third generation young adults initiated and led the strike. In 1922, the locally born made up a tiny proportion of the 3,500 Chinese resident of Victoria, perhaps no more than 300 people altogether, but two thirds came from merchant and professional families to whom the head tax did not apply. The young men belonged to the Chinese Canadian Club formed in 1914, becoming the first people to use the term “Chinese Canadian.”  It was at their clubhouse that they came up with the idea to organize the strike, and they developed a three-fold strategy of working through the CCBA, mobilizing the broader Chinese community behind the strike, and mounting a letter writing campaign in the English language daily newspapers to expose the board’s actions and win over support from the larger white public.

These young adults collectively had considerable cultural capital. The second and third generation were completely acculturated to life in Canada. Most were graduates of Victoria public schools, including the high school. At least one was a university graduate.  They had also attended Chinese language schools and some like their president Joe Hope (Low Kwong Joe) even graduated Chinese high schools. Segregation and the poor-quality education it brought threatened their futures in Canada. As Hope explained in a letter to the editor, segregation would mean, “we will be unable to take our part by the side of other Canadians, and we will then be pointed out as those who refuse to learn the customs or social life of the country — in fact, refuse to assimilate. It will have been forgotten by then that it was not because we did not want to learn, but because certain narrow-minded autocrats have taken upon themselves the responsibility of preventing our learning.” By January 1923, the letter writing campaign of Hope and the other locally-born Chinese was succeeded in winning broader support and two trustees opposed to segregation were elected to the board.

Despite several attempts at resolving the dispute, the strike continued for the entire school year.  In May 1923, the federal government introduced the Chinese Immigration Act, banning all immigration of people of Chinese race and requiring all Chinese in Canada, including the Canadian-born, to register with the federal government. During the summer of 1923, as the community halfheartedly prepared to continue the strike, the board proposed a settlement. In September 1923 Chinese students went back to their original classes.  However, all new students entering the schools had to attend special classes until their English was judged sufficient for integration into the regular classes.  These classes continued after the Second World War. However, the unity that the Chinese community created during the strike ultimately enabled them to achieve full political rights.

The Chinese students’ strike shows that racism is a social structure that people make, and that people who are excluded by it can successfully challenge if they are united and bring home the lived consequences of their exclusion to the members of the dominant group. As the commemoration shows, 100 years later this strategy is still key to fighting racism. Second, the strike shows that racism, including racial school segregation, has been integral to the making of Canada. Even more importantly, it also shows that if in Canada today racism has lost its grip on public policy, it is because of people’s active resistance. In 1922, racism, not antiracism, was public policy. Finally, in a time that said you could either be Chinese or Canadian, the resistance of Victoria’s locally born Chinese showed that it was possible to be both.  They showed with the stuff of their lives that the either/or divisions of white supremacy are a lie. Their spirit lives on today.

Timothy J. Stanley is professor emeritus in the Faculty of Education and the Institute of Indigenous Research and Studies of the University of Ottawa. His award-winning book, Contesting White Supremacy: School Segregation, Anti-Racism and the Making of Chinese Canadians (Vancouver: UBC Press, 2011), examines the 1922-3 students’ strike in detail.

Adams, John. Chinese Victoria: A Long and Difficult Journey. Victoria: Discover the Past, 2022.

Ashworth, Mary. The Forces Which Shaped Them: A History of the Education of Minority Group Children in British Columbia. Vancouver: New Star Books, 1979.