Early September saw the death of the European monarch who had reigned the longest over the territory some call Canada. The death was not unexpected. In some quarters, it might even have been welcomed. But it took some time for the news to reach Canada. The last ships had left months earlier on their Atlantic crossing. When they arrived in September and October 1715 with their missives from the court, issued in the name of Louis XIV, no one in Canada knew that the king had died.

At almost 77 years old, Louis XIV had outlived two of direct heirs. His son and grandson had pre-deceased him in 1711 and 1712, of smallpox and scarlet fever. His young great-grandson inherited the throne, but he had not reached the age to rule. In the meantime, Philippe, duc d’Orléans, would govern the country as regent.

For much of the existence of the colony of New France, Louis XIV had been the monarch, the central figure of the society that depended on his distant mystique for political legitimacy, at least among the French settler population. Louis XIV became king at the age of 4, his mother Anne d’Autriche serving as regent under the direction of Cardinal Jules Mazarin. After Mazarin’s death, Louis XIV began to assert his personal authority. Working assiduously on many files himself, he appointed a series of effective ministers who ran the government. He continued, historians claimed, to make important decisions about French affairs up to a few days before he died. At the regional level, the intendants who held office at the king’s pleasure served a key administrative function in ensuring that information flowed to the king and that his subjects largely followed his wishes. Intendants served the same function in the overseas colonies. 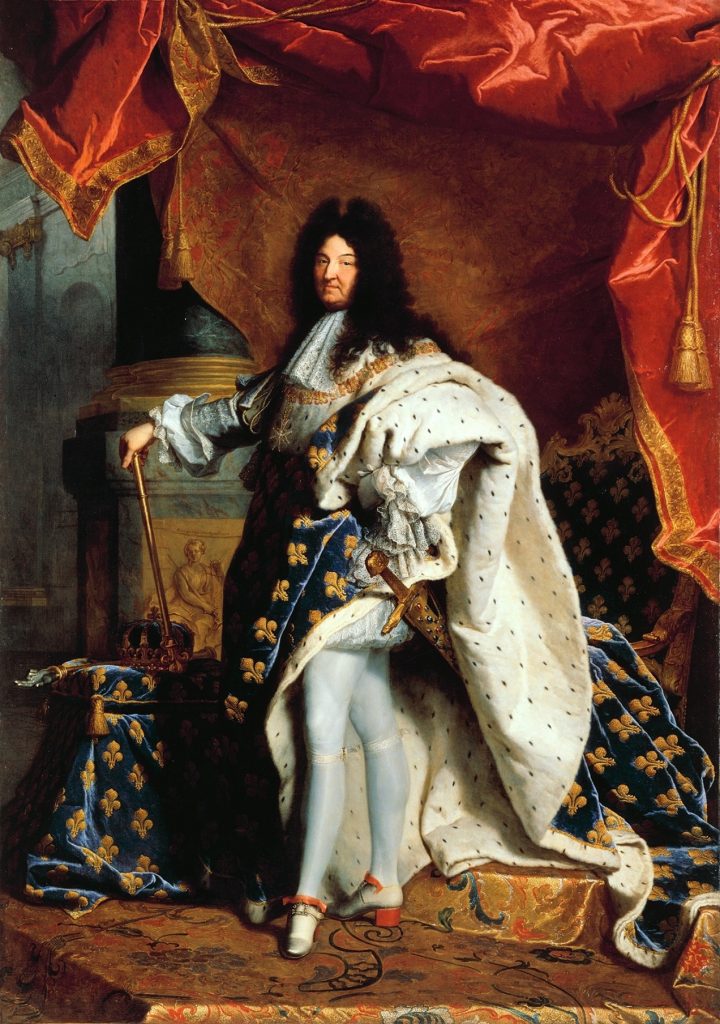 Hyacinthe Rigaud, “Portrait de Louis XIV en costume de sacre » (1701), Musée du Louvre, Paris. The famous “mythologizing and mendacious” portrait of Louis XIV, then 63 years old.  The painter depicts the ageing and increasingly infirm monarch with the strong legs of his youth and a wig hiding his baldness.  But, according to Colin Jones, it accurately shows the king’s toothlessness, a recognition of the fact that the king was both the embodiment of the timeless monarchy and a vulnerable human. Jones, “The King’s Two Teeth” History Workshop Journal, 65 (Spring 2008): 79-95.

The colony of New France was one of many projects to which Louis XIV dedicated some interest and money, but wars in Europe focused much of his attention from the 1680s. The king and his ministers sometimes expressed dismay at what they perceived as the slow growth of the European population in New France and the costliness of the colony. Nonetheless, the image of the Louis XIV remained the cultural touchstone of colonial political arguments and the development of embryonic state structures in the distant settler-colonial land.

Some Indigenous in the region of the French settlements referred to the king as Le Grand Onontio, or the great governor, extending the translation for the colonial governor’s name (after early governor Charles Huault de Montmagny, or Great Mountain) to the man that the governor served. Despite whatever the French claimed to themselves, Indigenous peoples did not embrace the status of subjects. Rather, they tended to remain indifferent to and outside French state structures. The best test is the use of the court system. Indigenous may have occasionally appeared before the court as witnesses, plaintiffs or defendants, but their use of the courts was exceptional.[i] And that would have been the best assessment from the king’s own perspective: while his style of governing may have been deemed “absolutist” by later historians, the legal system with all its prejudices and faults provided a key means of legitimizing state power.

Over a reign of 72 years, Louis XIV was not the same ruler throughout. Historian Arlette Farge has provided a short-hand account of his evolution over the decades: the king successively was “glorious, intimidating and severe, but finally exhausting.”[ii] In continental Europe, the Bourbon regime monitored allegiance to the kings, growing more insistent at moments of stress, such as when Robert-François Damiens attempted to assassinate Louis XV in 1757. This was enforced compliance. Farge writes: “The language of loyalty was called for, and not to use it was a crime.”[iii] That strenuous approach lay some decades in the future, but a similar spirit imbued Louis XIV’s reign.

As Louis XIV lay dying in 1715, France prepared to move on. Historian Pierre Goubert concludes that “Everything suggests that, setting aside the customary civil and religious displays, France, from the greatest to the least of her subjects, experienced a profound sense of relief.”[iv] Some openly celebrated. Historian Colin Jones reports that “Marquees along the Saint-Denis road past which the king’s body was conveyed were filled with people ‘drinking, dancing and laughing’…”[v]

The little evidence we have suggests that mourning failed to break out in the colony. The chronicler for the Hôtel-Dieu recorded that the news of Louis XIV’s death arrived with the first ships of 1716. Loyally asserting that, “Never has there been a king more worthy of reigning,” Françoise Juchereau nonetheless chastised her fellow French subjects, presumably those in the colony as well as those in continental France, who “have been little affected by his death.”[vi] Bishop Saint-Vallier, who had little personal reason to venerate the king, praised the king’s piety and his love for his peoples. But he recognised the monarch’s human failings, and he directed the male and female religious communities to pray for the king’s soul for fear that he was experiencing the “flames of Purgatory for the faults for which he had not atoned before God’s rigorous justice.”[vii] Because of the delay in receiving the news, Saint-Vallier’s directive was issued over a year after the king’s demise. The Superior Council, the highest court in the colony, agreed to commemorate the king’s death through a procession to the Cathedral in mid-October 1716.

The reaction recorded for earlier royal deaths had been much more compelling. When the tiny French settler population learned in 1643 of the deaths of both Louis XIII and Cardinal Richelieu, the Jesuit chronicler recorded that “All Canada melted in grief.”[viii] In 1666, Anne d’Autriche’s death was met with dismay, again according to the Jesuit recording the events of the year. (Her fervent Catholic faith and support for the religious exclusivity in the colony appealed to the Jesuits.) Churches were draped in black, and Intendant Jean Talon ordered a special service in the main church at Québec. This was one of the most remarkable ceremonies in the (relatively short) history of the colony: “This Service would have seemed magnificent anywhere, but its effect in a country where nothing like it had ever been seen exceeded all description.”[ix]

No one recorded the same commemorative event for the long-lived Louis XIV. An aged king, the European monarch who will probably always hold the record for the longest reign over the territory now known as Canada, slipped away. His less competent and more frivolous heir, Louis XV, took his place.

Colin Coates is a professor of History and Canadian Studies at Glendon College, York University.