The report of the CHA Task Force on the Future of the History PhD in Canada is now available (in English and in French). This is the first in a series of posts by Task Force members, offering their perspectives on selected themes from the report. Activehistory.ca encourages readers to join in the conversation, either in the comments or on social media, or by submitting a response piece to be considered for publication upon the series’ completion.

There are many facts and figures in the newly released report of the Canadian Historical Association’s Task Force on the Future of the History PhD in Canada. As a group, the authors – Catherine Carstairs, Sam Hossack, Tina Loo, Christine O’Bonsawin, Martin Paquet, John Walsh, and myself – approached our work as a research project. We were aided by research assistant Danielle Mahon. We conducted surveys, held consultations, hosted workshops, scoured PhD program requirements, studied collective agreements, tabulated tuition fees, reviewed faculty information, drew on government statistics, and more. We aimed to describe and analyze many issues related to History PhD programs.

One of my data sets focused on completed dissertations. While the Task Force acknowledged that some historians are trained in PhD programs beyond the discipline proper, there are 24 History PhD programs in Canada involving 26 History departments. Students graduating from each department must submit their dissertation to their university’s online thesis repositories. Consulting the repositories, I counted 562 History dissertations completed between September 2016 and August 2022. 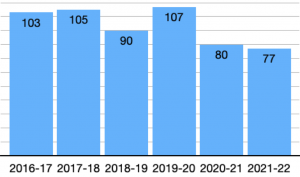 Arranged by academic year, the numbers show how the COVID-19 pandemic has slowed completion. Where roughly 100 dissertations were completed in the years prior to the pandemic, 77 were completed in 2021-22. In the Task Force report, Catherine Carstairs used Statistics Canada information to show that History PhD program enrolments have been cresting downward, but that trend would not account for the swift drop in completions after the onset of pandemic restrictions on travel and archival access.

By university, more than twice as many History dissertations were completed at the University of Toronto than any other university in Canada. Completed dissertations are a useful proxy for the relative size of PhD programs. The programs vary quite a bit.

By language, 460 dissertations were written in English, 102 in French. (There is no reliable way to determine the gender of historians based on their names. But Statistics Canada figures indicate that in 2019-20, 54% of those enrolled in History PhD programs were men and 45% were women. As well, for 2018, Statistics Canada reported that 41% of doctoral graduates in the humanities were aged 30 to 34 and another 50% were 35 or older.)

Based on title, I made judgements about the temporal scope, geographical focus, and primary field of study of each dissertation. 58% of dissertations examined the 20th century. Though the percentage is high, it is in line with the specializations of History faculty at Canadian universities.

45% dissertations were written about Canada or Canadian-claimed Indigenous territories. This was less than I anticipated. PhD graduates studied Europe (32%) and the United States (7%) significantly more than other parts of the world.

Social history was the leading field of study. However, the interests of historians were fairly well spread. No other field had more than a 20% share of the total. Military and diplomatic history (which I chose to group) were the focus of 10% of dissertations, reflecting ongoing student interest in those areas of study.

Lastly, for a bit of keyword analysis and visual fun, I took the title of every dissertation and produced a word cloud. Among keywords, war (55 times) edged out Canada (49) for top spot. 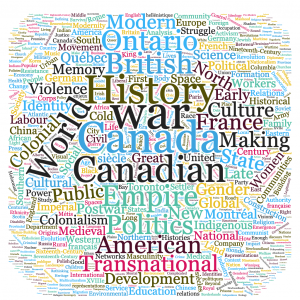 Over the last six academic years, the just-so dissertation was a 20th-century social history of Canada completed at the University of Toronto prior to the pandemic. It was probably written by a man in their 30s. And the title might have been along the lines of “A History of the Making of a Modern Canadian Public during World War.” Of course, this archetypal PhD graduate does not exist. But the numbers and figures emerging from the completed dissertations data set provide a fuller sense of recent History PhDs in Canada.

One thought on “Recent History PhDs in Canada, by the Numbers”