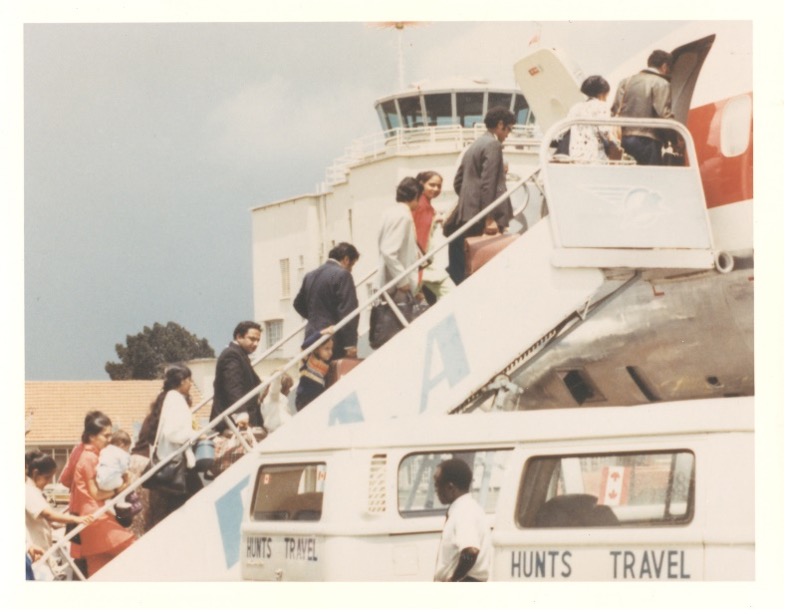 On August 4, 1972, the President of Uganda, General Idi Amin, announced that South Asians who were British citizens would be expelled from Uganda because, according to him, they were sabotaging the economy. This decree set into motion a mass exodus of the South Asian population of Uganda, who were given just ninety days to settle their affairs and start a new life in a foreign country. Over 7,000 South Asian Ugandans found themselves re-settling in Canada in the months following the expulsion announcement. For many, Canada would become their permanent home.

To share the lived experiences of these individuals, Carleton University Library, which located on the traditional lands of the Algonquin nation in Ottawa, Ontario, is developing the Uganda Collection, originally donated by the Canadian Immigration Historical Society in 2012. This archival collection consists of over 1000 newspaper clippings from the 1970s about the expulsion and reception, a personal memoir that documents the experiences of the Canadian Immigration team in Kampala in 1972, a logbook of arrivals to the Canadian Forces Military Base Longue Pointe, an interactive map of where Ugandan Asian refugees were resettled in Canada, and oral histories from Ugandan Asian refugees who share their lived experiences of the expulsion and their subsequent resettlement in Canada. To commemorate the fiftieth anniversary of the expulsion this year, the library is hosting Beyond Resettlement: Exploring the History of the Ugandan Asian Community in Exile, a conference that will explore the historical context of the expulsion, Canada’s response and the reception of a large number of the refugees, the larger diaspora of Ugandan Asian refugees, and the lived experiences of the community in Canada and the diaspora over the past fifty years.

But commemoration leads to difficult questions. For instance, what type of commemoration is appropriate for an event that forced over 40 000 people to leave their home country, abandon their belongings and begin anew in sometimes unfamiliar places? To answer this particular question, the conference was shaped to share the experiences of Ugandan Asians in Africa, Canada and elsewhere, and to consider what it meant to be a racialized refugee community in the 1970s. Working within this framework, the conference will broaden understandings of the experiences of refugee resettlement in Canada and elsewhere.

Even before the conference and the fiftieth anniversary, though, the Uganda Collection was already achieving these aims by offering resources for those unfamiliar with the expulsion to as well as for scholars invested in researching this topic. To create a foundation of understanding for all, the collection offers a look into Idi Amin’s Uganda in 1972, a summary of the resettlement of Ugandan Asian refugees in Canada, an overview of the expulsion as a whole and Canada’s response, and two interactive digital chronologies: one that chronicles the expulsion from a Ugandan perspective, and the other from a Canadian perspective. These elements provide an educational foundation, and they also present insights into the expulsion, such as the influence of earlier president Milton Obote pursuing the “Africanization” of Uganda. While trying to situate African Ugandans more centrally in the economy, Obote limited South Asian Ugandans’ economic mobility, which increased hostile feelings towards South Asians before Idi Amin came to power. It also points out that when the minister for Manpower and Immigration, Bryce Mackasey, initially set up the emergency admissions program to admit the South Asians coming from Uganda, he estimated that 5 000 would take Canada up on its offer. In the end, closer to 8 000 South Asian Ugandans made Canada their new home.

The digitized resources in the Uganda Collection yield further opportunities for insights into the Ugandan Asian experience in Africa and the refugee resettlement experience in Canada. The Bennett Collection’s newspaper clippings from the Uganda Argus newspaper offer a look into the political climate of Uganda before and during the expulsion. The Hempel Collection, on the other hand, looks at the expulsion through the lens of largely Canadian and British newspapers. It sheds light on how the expulsion was being reported in these commonwealth countries and the public’s opinions about the refugees’ arrivals. To highlight the Canadian perspective, the collection shares Seven Crested Cranes, a memoir written by Roger St. Vincent, the Team Leader for Canada’s immigration team in Kampala, Uganda. St. Vincent’s memoir is unique in that it provides a look at the day-to-day issues the team faced while facilitating the immigration of the South Asian Ugandans. The Longue Pointe Logbook recorded by Chief Warrant Officer Randall of the Canadian Armed Forces registered the South Asian Ugandans as they arrived at the Canadian Forces Base in Montreal. The logbook is of particular interest because staff recorded where members of the diaspora were sent to or chose to go to upon arrival in Canada. However, seeing this resource in isolation does not provide an explanation as to why these individuals agreed to go to certain cities or towns in Canada. Fortunately, the collection is also home to many oral histories, which can encourage a deeper understanding of all the other resources in the collection.

The oral histories conducted with South Asian Ugandans who left Uganda in 1972 commemorate the expulsion in a holistic manner. They blend elements of the other resources in the collection and aid the listener/reader in understanding the broad reaching impact of the expulsion by engaging emotions and subjectivities through the sharing of lived experiences. Considering this, the oral histories are uniquely positioned to yield insights into the Ugandan Asian experience in Africa, Canada and elsewhere in the diaspora and to consider the nature of being a racialized refugee community in 1970s Canada and beyond.

Commemorating a historic event such as the expulsion poses a unique challenge for historians. Marking an event that took people from their home country and away from their families can bring up traumatic memories, grief, and unsettling feelings, but it can also recall great triumphs of spirit. The Uganda Collection and the Beyond Resettlement conference intend to navigate the complex feelings that come with an anniversary such as this one by focusing on the personal experiences of South Asian Ugandans who were affected by the expulsion decree. The lived experiences of refugees have guided the shaping of the Beyond Resettlement conference, so that participants and attendees will be able to explore the enduring impact of the expulsion on the South Asian community and the places that became new homes.

Jackie Mahoney is the Research Assistant for the Uganda Collection at Carleton University, where she is also a second-year MA student studying Public History