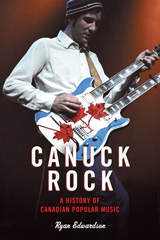 Rock and roll: a phrase that can conjure wildly differing images: smoky bars, boozy nights, and damaged ears that ring for days. Alone, behind closed doors, safely sequestered from the parents/roommates/spouse/children, earphones glued to the head, covered in goosebumps from what is surely a life-changing musical experience. Devil music that corrupts impressionable youth.

Rock and freaking roll. Canadian rock and roll. When it comes to such an intensely personal topic as music, it’s impossible to please everyone, but Ryan Edwardson’s Canuck Rock: A History of Canadian Popular Music (University of Toronto, 2009, $27.95) is an excellent starting point for those who have yet to discover many of the bands discussed in the book, and can also serve as a nostalgic refresher for those with a stronger understanding of the Canadian music industry.

Canuck Rock is an ambitious examination of the beginnings and growth of popular music in Canada from the 1950s to the twenty-first century. Edwardson has a particular interest in the CRTC (Canadian Radio and Television Commission) and its notoriously problematic Canadian content regulations – three of a total ten chapters (chapters 6, 7, and 10) are devoted to this topic, with liberal mentions throughout the rest of the book. Multitudes of opinions are explored on the CRTC rulings, loosely defined as how radio stations are mandated to play 30% Canadian content – the definition of Canadian content has been the major point of contention since the 1960s, and is still being argued and redefined. (142-144, 147, 149, 229-230)

The text is well written and heavily researched, with a hefty fifty-one pages of footnotes, but do not despair – this is no dry thesis, but an informative and entertaining look at a vital part of Canadian history. With such a wide scope, it is inevitable that readers will feel that some vital players in Canada’s music scene may have been left out. It’s important to remember the book’s subtitle: “A History of Canadian Popular Music.” Sadly, this means that hardcore/punk influences, jazz, electronica and hip-hop – plus various other sub-genres – are simply left out. Perhaps more obscure Canadian musical influences will be material for a future book.

Edwardson relies heavily on personal anecdotes and opinions throughout the book, especially in the first few chapters, such as when singer, songwriter and general rockstar Randy Bachman describes how he felt after purchasing his first Elvis Presley recording: “I was transfixed. I saved up my money and bought that first Elvis Presley album … That was my first record album … There was a wildness to the music …”. (37) Or Dave Bingham of the Ugly Ducklings describing hearing the Rolling Stones’ ‘It’s All Over Now’ for the first time in 1964:

… When the opening chords of that tune boomed out of the speaker I was blown away! No one had ever recorded at that volume before. It was a preview of what was to come. Two days later I had the single and would play it over and over every night down in the basement marveling at the intensity of feeling and the exuberance in their playing … (66)

It’s these personal quotes, culled from a variety of archival and current publications and correspondence, that bring a warm emotionality to the text, and media reports quickly convey the social opposition to this wild new fad. The Vancouver Sun reported Vancouver’s first major rock concert as quite the hedonistic spectacle, where Vancouver’s own The Prowlers opened for headliners Bill Haley and His Comets at Kerrisdale Arena on June 27, 1956:

Another writer for the Sun displays similar disgust when Elvis hit town almost a year later, and wrote a piece with the jarring headline: “Daughter Wants to See Elvis?: Kick Her in the Teeth!” (39)

Edwardson follows a fairly linear recounting of the development of the music industry within Canada, from its early beginnings with the safe crooning of quartets like Toronto’s The Four Lads (29) and grassroots folk acts such as Ian & Sylvia, Leonard Cohen and Joni Mitchell, to more divergent sounds and influences from Great Britain and the States. He focuses on many of the challenges that Canadian bands faced with regards to gaining respect and recognition within their own country. This was not only due to simple geography, but also as they were up against the much more popular and therefore market-safe sounds of imports from the U.K. and U.S.; many Canadian radio insiders simply didn’t believe that Canadians could rock as hard as their foreign counterparts. (56-57)

Though the majority of the book concentrates on English language music, la belle province is far from ignored; indeed, deep respect is paid to the strong star system nurtured in Quebec:

Québécois nationalists were years ahead of their English-speaking counterparts when it came to mediating a national sense of self through popular music, with folksinger-songwriters on the ground floor of a musical empowerment that celebrated and romanticized the past while laying a blueprint for the future. (100)

The politics behind the marketing of music in Canada, especially the early problems of geographic inconvenience, are also well-explored, particularly in chapters 4 and 5, as the exodus of many Canadians to the US is detailed – which leads into the aforementioned CRTC-heavy sections. The control of multinationals within the Canadian recording and radio industries, as well as the influence of the internet and digital file sharing, concludes the final chapters.

Canuck Rock is a comprehensive piece of work; entertaining and fact-based, with liberal sprinklings of rock star egos, political shenanigans, and international complications.

Carrie Schmidt is an archivist and librarian currently living in Vancouver, BC, via Montreal, QC, and originally from Edmonton, AB. She likes to get around, handwrite her correspondence, talk to strangers on the bus, and share her bleak wit and random photographs at carriecarm.blogspot.com.