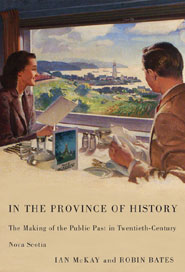 The book is an impressive, if rather daunting, academic work, six years in the making, and it takes on the sacred cows of the Nova Scotian popular tradition. Back in 1992, McKay fired his first salvo at “Tartanism” or Nova Scotia’s supposed “Scottishness” in the regional academic journal Acadiensis, and he followed in 1994 with Quest of the Folk, a searing look at the cultural contradictions embedded in popular folk culture. He returns to the field with researcher Robin Bates to deliver a full-blown critique of Nova Scotia’s tourism-driven public history. McKay and Bates contend that Nova Scotia’s popular history has been spun as “a story of progress, growth and liberty.” In this “liberal order” interpretation, the province’s narrative history is presented and misrepresented to attract visitors in ways that highlight its “whiteness” and exclude aboriginals, ethnic minorities, women, and ordinary working people.

Based upon a mountain of evidence, drawn from archival records, artifacts, and tourist propaganda, the authors examine in minute detail how popular writers, tourism promoters and public figures each played their role. Poet Henry Wadsworth Longfellow, writer Thomas Head Raddall, and former premier Angus L. Macdonald all figure prominently in shaping the prevailing vision and ethos found in “tourism/history.”

Nova Scotia’s public past, McKay and Bates argue, propagates pride in heritage, but blurs the distinctions between fact and fantasy and perpetuates a safe, stereotypical, romantic history. In the end, the province of history is really just the heritage promotion business and it is driven, like almost everything else, by the desire for profits.

The authors clearly relish taking on Nova Scotia’s recognized folk heroes and political titans. Longfellow is excoriated for his 1847 poem Evangeline, a popular tourist item which dramatizes the brutal British expulsion of Acadians from Nova Scotia. The revered former lion of Nova Scotia popular writing, Thomas Raddall, comes in for sharp, precise criticism as a Britannic popularizer with a penchant for literature sprinkled with crude racial and gender-based stereotypes. Premier Angus L. Macdonald is singled out as the leading purveyor of “Tartanism” who left a lasting legacy of parsimonious Highlander politics rooted in “mystic racialization” of Gaelic culture.

Much less convincing is the authors’ attempt to lump together Nova Scotia’s leading public intellectuals and political figures as defenders of the emerging liberal order. Popular Amherst-born writer Will Bird, author of the incomparable Ghosts Have Warm Hands, would have been most uncomfortable being paired with the thoroughly British and patrician Raddall. If, as McKay and Bates insist, Angus L. was so obsessed with promoting “Tartanism,” one might have expected more reference to it in Stephen Henderson’s recent 2007 biography of the man. It’s also quite a stretch to imagine Liberals and Tories, or Protestants and Catholics, conspiring together when their shared history was so bitterly contested for much of the 20th century.

McKay and Bates’s In the Province of History is a profoundly important book, irrespective of its periodic excesses. The lead author is a formidable Canadian academic, a respected former editor of New Maritimes magazine, and now an influential historian based at Queen’s University. Much of what passes for Nova Scotia’s public history remains mired in touristy imagery and sentimentality. Historians like McKay and Bates who are genuine critical thinkers are effective in exposing fabrications and provoking much-needed rethinking. After all, many of us do cringe at the sight of Nova Scotia premiers playing the fiddle, see fissures in Nova Scotian society, and prefer to keep those provincial tartan ties safely in our closets.

The authors have produced a weighty volume that deserves to be taken seriously here in Nova Scotia. If the province’s tourism promoters ever discover McKay and Bates’s book, look out for big changes. Doers and dreamers frolicking on the scenic coastline of Canada’s ocean playground would certainly disappear, and perhaps the provincial guide book would be supplanted by a new version entitled Unsung Heroines and Ordinary Working Folk.

Dr. Paul W. Bennett is Director of Schoolhouse Consulting, Halifax, author of The Grammar School: Striving for Excellence in a Public School World (Formac, 2009), and blogs regularly on Educhatter.