The following was my contribution to a 2010 Canadian Historical Association roundtable, “So What IS the Story? Exploring Fragmentation and Synthesis in Current Canadian Historiography.” In it, I tried to a) graphically illustrate the marginalization of Canadian historical scholarship, b) argue why demography is likely only to make this problem worse, and c) suggest a response. All in under 1400 words. As far as I know, only one person was at all convinced, let alone inspired, by my presentation: me. It got me thinking about how one might go about writing a history of Canada that would necessarily cover the entire country from the beginning to the 21st century, that would treat Canada in global terms, and that would be relevant. Last month, I published a very, very early outline of such a history, “A Little Essay on Big.”[1] In an uncharacteristic fit of confidence, I’ve dusted off my presentation and asked ActiveHistory.ca if they’d like it, largely unchanged. I welcome your thoughts.

The opportunity to synthesize some ideas on why and how we might, individually and collectively, better synthesize our Canadian history research and teaching is a chance too good to pass up. But, perhaps inevitably, to reach that point first requires some disjointed thinking.

Let’s begin with two graphical representations of the state of the Canadian history field. The first (Figure 1) seeks to compare the position of Canada and Canadian history in the 20th century world. The left y-axis, measuring Canada’s population as a proportion of global population, shows general consistency: throughout the 1900s, roughly 1 out of every 200 humans was a Canadian. The right y-axis, measuring the number of books on Canadian history found in WorldCat, the world’s largest library union catalogue, as a proportion of those books on history generally, shows more variability. But from a high of over 2.5% of the historical literature in the early 1900s, to at least 1% for the past 70 years, the Canadian history field has consistently been significantly more productive than what our nation’s population alone would predict. In terms of output, we historians of Canada have punched above our weight. Of course, that is exactly what one would expect of a wealthy, healthy, literate nation.[2] 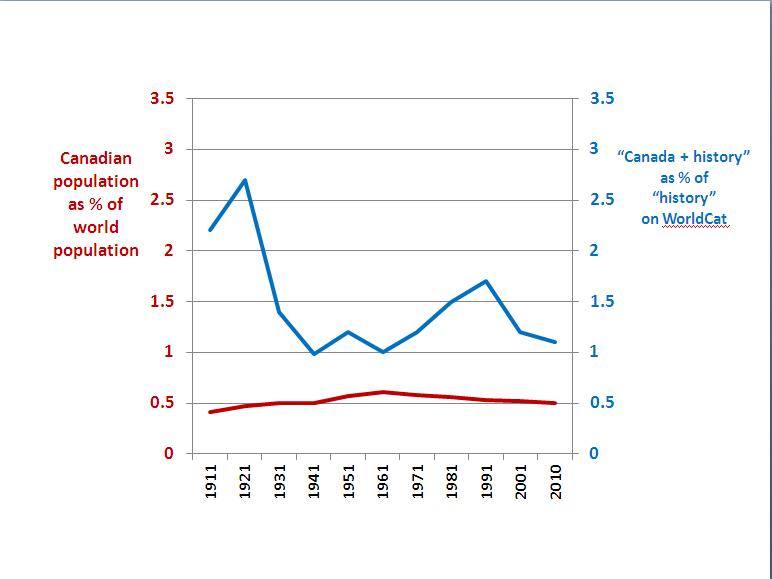 Figure 1: Canada's population and its historical literature in the 20th century.

The second representation (Figure 2) is a photograph of the Canadian history section at my local Chapters bookstore in spring 2010. The section seems, to my eyes, small – in part because it was about twice that size less than a decade ago. But even that does not tell the whole story. Of the 53 titles shown, remove the seven that are not actually Canadian history, such as the misfiled biography of Kristi Yamaguchi. Remove the 23 titles written by journalists, political scientists, judges, and Rick Hillier. Perhaps remove the eight titles by Pierre Berton, solely because he is dead. What remains, in the largest bookstore in the nation’s tenth largest city, are 15 titles written by living Canadian historians (Figure 3).[3] We might call this lackluster result anomalous, but Chapters-Indigo and its online stores move about half the books sold in Canada. In terms of reaching a broad audience, we historians of Canada are punching significantly below our weight. 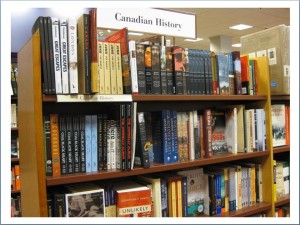 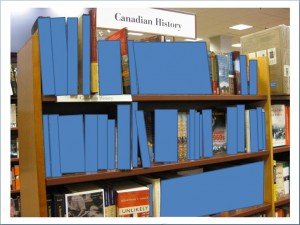 Figure 3: Canadian history section of Chapters bookstore, North London, Ontario, May 2010, with all the titles but those of living Canadian historians expunged.

Turning to a visual articulation of Canada as it exists today may help begin to account for the disparity between Canadian historians’ productivity and influence. On Statistics Canada’s online population clock (Figure 4),[4] the nation’s population is represented as an odometer, the numbers inexorably ticking upward. As of this writing, the odometer reads 34,639,156, climbing at the rate of about 1000 per day. Put another way, every two weeks the population of Canada in 2011 grows the entire population of New France in 1700. As historians we have not been inclined to look squarely at the vertiginous rise of the nation’s or the world’s population, precisely because it is so dizzying. Consider that the population of Canada in 2000 was larger than the population of Canada (or rather the geographical area that became Canada) in 1950 plus 1900 plus 1850 plus 1800 plus 1750 plus 1700 plus 1650 plus 1600 plus 1550 plus 1500.[5] Does this suggest that a Canadian history survey taught in the year 2100 should dedicate as much time to the people of today as to those of the previous 500 years put together? Presumably not, because as teachers of such surveys today we do not dedicate as much time to 1950 as we do the 450 years before that, even though the 1950 population was as large as all those half-centuries put together, too.

Historians should take the time to reflect on how we deal with the relationship between people, time, and history.[6] On the one hand, even the most dyed-in-the-wool, history-from-the-bottom social historians are likely resistant to the notion that it can be a simple equation of more people equals more history.  If that were the case, since there were and are so few Canadians, why study Canadian history at all? If that were the case, why, when there were and are so relatively few Canadians, study Canadian history at all? In fact, with the human population rising so fast, why study the diminishing percentage of past humans, why study history at all? On the other hand, historians have been even more resistant to the notion that a simple equation of more time equals more history. In On Deep History and the Brain, Daniel Lord Smail notes that in the 19th century, while the historical sciences such as geology and biology were coming to grips with a much older Earth than had been previously imagined, history itself continued to concentrate on recent centuries by replacing a scale based on sacred history with one based on civilizations. In fact, historians have since focused even more on the most recent past.[7]

In the absence of discussion, let alone consensus, historians have created our own fuzzy, unspoken, individual equations for deciding which peoples and times merit our study. It is hardly surprising that we have disproportionately studied societies that are more like ours (i.e., closer to home) in centuries more like ours (i.e., closer to now). In terms of Canadian history, this has resulted in a focus on the mid-late 19th to mid-late 20th century, a concentration that – besides largely excluding more recent immigrant groups and playing down First Nations’ experience of deep time in Northern North America – may be simultaneously just too remote for most Canadians and too recent for the more historically-minded. And with university history departments inclined to hire like-minded historians as colleagues, the results can be self-replicating. Perhaps that is why history departments, more so than the rest of universities, look demographically like 19th century Canada.  Six faculty members of my department, four of whom study Canada, have last names that start with “Mac” or “Mc.” We study what we resemble, and soon we resemble what we study. There are more Canadian historians producing more Canadian history than ever before, and a larger potential audience for that history in Canada and elsewhere than ever before.  Yet, we have failed to find that audience. In 1951, Arthur Lower asked, “What class of person has done more for Canadian culture in the last thirty years than the Canadian historian?” [8] Would any Canadian historian say such a thing today? 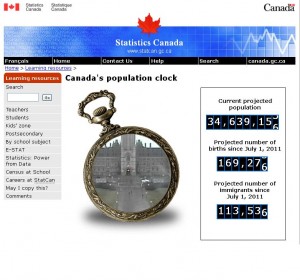 Which leads me, belatedly, to synthesis. Ruth Sandwell has suggested on this roundtable [and in a subsequent paper on the website] that Canadian historians should teach what they do. Yes, but imagine if we were also to do what we teach. Whereas the bulk of our research and writing is on a relatively small, discrete subset of Canadian history, in our survey courses we have no qualms about constructing – or borrowing? – a sweeping view of the entire field from the last ice age to the present. We produce for our students a vision of Canada that we rarely share with our readers and colleagues (who are too often the same people). Imagine if we were to spread our elbows more assertively and move our research and writing beyond the thin sliver of the recent past. If we were to run our histories further into the past, to respect the deep history of this country and to engage fully with the reality that the past lives on in more than just documentary traces. If we were to run our histories up to the present, so as to make their meaning and import more apparent to Canadians today. If we were to position our written work in terms of the broader corpus of Canadian history in the same way we have been taught to position it in terms of theory. The result would be the end of that very polite, very Canadian historical tradition of steering clear of topics on which others are working. Instead, there would be bigger projects, in terms of people and time, ones that would inevitably spill out over one another, that would force us to deal more often with each other’s work and raise the bar on our own. The goal would not be a national synthesis. The goal would be more and better dialogues with Canadians and with one another.

[1] “A Little Essay on Big: Towards a History of Canada’s Size,” in Big Country, Big Issues: Canada’s Environment, Culture, and History, a special issue of Perspectives 2011 no.4 (Munich: Rachel Carson Center, 2011).

[2] Canadian population figures are from Statistics Canada, http://statcan.gc.ca/cgi-bin/af-fdr.cgi?l=eng&loc=A1-eng.csv – accessed 1 September 2010. World population figures are from the U.S. Census Bureau, http://www.census.gov/ipc/www/worldhis.html – accessed 1 September 2010, and John H. McNeill, Something New Under the Sun: An Environmental History of the Twentieth Century (New York: W.W. Norton & Co., 2000). The WorldCat figures were found by keyword searching “history” and “Canada + history” in the description of books of all languages each decade.  http://www.worldcat.org/advancedsearch – accessed 20 May 2010. A separate search for “Canadian + history” resulted in smaller numbers but the same general trend, except for a shallower rise at the end of the century. Obviously, these WorldCat results are rather impressionistic. In another attempt to visualize Canadian history scholarship, I graphed the number and size of footnotes in the first volume each decade of the Canadian Historical Review. Whereas the number of notes grew, the real growth was in their average size, from less than two lines/note until the 1970s to almost four lines/note today. This certainly reflects changes in the practice of citation, but also the fact that there are many more relevant sources to cite.

[3] This includes not just professional historians but also those who, on their book jacket or website, prominently declare their historical training.

[5] That assumes a figure of one million people for each pre-1800 date. That number may well be low for pre-European contact, when aboriginal populations are commonly estimated at 500,000 to two million, but is likely high for post-contact years, after those populations were decimated by disease and war.

[8] A.R.M. Lower, review of Royal Commission Studies: A Selection of Essays Prepared for the Royal Commission on National Development in the Arts, Letters and Sciences, in Canadian Historical Review 32 (December 1951), 381-3, cited in Marlene Shore, The Contested Past: Reading Canada’s History (Toronto: University of Toronto Press, 2002), 19.

3 thoughts on “A Polyphony of Synthesizers: Why Every Historian of Canada Should Write a History of Canada”