Statistics Canada is making significant changes to the way that the Canadian census is conducted.  Beginning in 2011 the long census form will no longer be distributed to Canadians. Previously, this portion of the census collected information on topics such as ethnicity, religion, employment, education, income, and various other social concerns.  Information on some of these topics will now be gathered by a new voluntary National Household Survey (NHS).  Unlike census information, data gathered through the NHS is not subject to the same laws regarding release of information to the public.  Statistic Canada does not currently release information gathered through surveys, meaning that a valuable resource for researchers is essentially being eliminated. 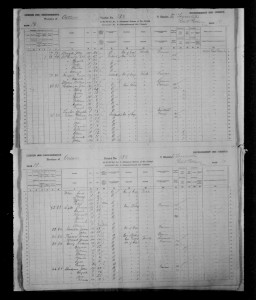 Historians, genealogists, sociologists, and numerous other researchers all use census data generated through the old long census form.  Genealogy is on the rise in Canada and one of the primary resources genealogists rely on is census data.   The public release of Canadian census data collected prior to 1911 has made it easier for anyone to explore their family’s past. Additionally, census data is used to track changes over time, to learn more about factions of society, track migration patterns, and examine various other social history topics.  It is not clear if the new NHS will include all of the topics previously covered by the long census form or if it will  be changing the type of information collected.

According to Statistics Canada, the decision to eliminate the long census form was based on privacy concerns held by the Canadian public.  The increased desire for protection of personal information is nothing new.  However, the data previously collected by the long census form was only released to the public 92 years after it was collected.  This delay in releasing detailed information was enacted as a means of protecting privacy and still allowing the public to benefit from the information collection.

Despite the claims that these changes were enacted in the name of privacy, according to the Office of the Privacy Commissioner the actual number of complaints about the census has dropped in recent years.[1]  Additionally, there have been suggestions that the feedback report Statistics Canada received following the last census made no mention of privacy at all.

Even prior to the exposure of the lack of evidence of privacy complains, the Liberal Party began to urge the Conservatives to recant their decision.  The Liberals have called the census changes a veiled attack against social services and see it as a serious blow to future policy creation.  Overall, the movement to a voluntary survey, with results that may never be made public, is a serious blow to social research, compromises the ability to track long term trends, and has the potential to drastically impact future government policy.

A petition to keep the Canadian census long form can be found here.

Krista McCracken is a public history consultant and is currently working as a Digitization Facilitator for Knowledge Ontario.