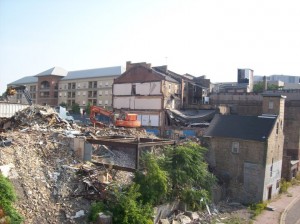 If you’ve read my previous blogs, you’ll notice that I talk a lot about Brantford, Ontario.  Since completing my PhD in History from McMaster University I’ve been working as the Executive Director of the Canadian Industrial Heritage Centre (CIHC), a not-for-profit organization in Brantford dedicated to the preservation and promotion of Canadian industrial history and the establishment of a museum site in Brantford to do just that.  This experience has expanded my understanding of how local communities understand and experience history, and the challenges of being an active historian.

In my last post “History, Heritage and Municipal Elections,” I discussed how the issue of heritage preservation was becoming a topic of debate in the realm of municipal politics.  In Brantford the need for a municipal Heritage Master Plan entered the political landscape last summer.  At the annual general meeting of the CIHC in June 2010, I gave a public presentation describing various examples of the adaptive re-use of industrial buildings in the Grand River valley, providing several examples from nearby Cambridge, Ontario.  In 2008 Cambridge became only the third municipality in Ontario, after Toronto and Niagara Falls, to adopt a municipal Heritage Master Plan which provides guidelines for protecting, conserving and enhancing the city’s heritage resources.  Recently, the Canadian Association of Heritage Professionals recognized Cambridge’s Heritage Master Plan with the 2010 Heritage Planning Award.

Since my talk last June, the idea of a Heritage Master Plan for the city of Brantford has had wide circulation.  Brantford the issue of heritage preservation came to the forefront in the wake of the demolition of forty buildings in the historic downtown core, many of which dated to pre-Confederation times.  Although the grass-roots movement to save these buildings failed, what emerged was a new Brantford chapter of the Architectural Conservancy of Ontario, which was recently recognized with an award for its local advocacy.  Other grass-roots efforts paid off in Brantford when an independent investigation concluded that the municipal task force responsible for the expropriation and demolition of the forty buildings downtown, the so-called “South-Side Six,” violated the Municipal act by holding in-camera meetings and failing to give the public adequate notice of its activities. Brantford heritage advocates were also rewarded with the results of the October 25th municipal election.   Of the “South-Side Six,” the five councilors plus the mayor who pushed through the expropriation and demolition of the buildings in the downtown, only two councilors were re-elected.  Brantford’s newly-elected mayor Chris Friel immediately spoke of his plans for a Heritage Master Plan and Heritage Trust for the city, as well as his support for the Canadian Industrial Heritage Centre museum.

While it’s been a tough year for those trying to preserve and promote heritage in Brantford, it is rewarding to see the dedication and activity of regular citizens driven by a desire to protect what’s left of Brantford’s physical reminders of its past.

One thought on “Active History on the Grand: Brantford Up-date”