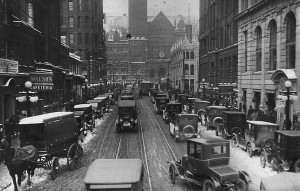 If the “war on the car” in Toronto is apparently now over, when exactly did it begin?

Defining restrictions on car use and measures to improve other forms of mobility as a “war” obviously contains an explicit value judgment at the root of its military metaphor: drivers on the defensive against those fighting a campaign against the automobile.  Conflicting understandings of the car’s place in urban environments, however, date back to the turn of the twentieth century, when the horseless carriage first arrived on city streets.

Many Ford supporters would probably suggest that Toronto’s previous mayor, David Miller, represented if not the beginning than at least the apex of the war on the car.  Miller was a champion of bike lanes on streets and pedestrian-friendly policies.  Miller’s second term also saw City Hall pass a $60 vehicle registration tax, which all major candidates during the recent mayoral election – including Miller’s deputy mayor and long time councillor Joe Pantalone  – stated they would repeal.  Miller was the most public spokesperson for Transit City, and its social vision of serving “priority neighbourhoods” with accessible and convenient transit.

Others might trace the war on the car in Canada’s largest city to 1971, when Ontario Premier Bill Davis cancelled the completion of the Spadina Expressway (known today as Allen Road).  Drawing on rising environmental concerns and protest from residents who believed the expressway threatened inner-city neighbourhoods, Davis famously declared:  “If we are building a transportation system to serve the automobile, the Spadina Expressway would be a good place to start.  But if we are building a transportation system to serve people, the Spadina Expressway is a good place to stop.”  The premier announced that the province now planned to increase investment in transit, although his government continued to build highways and allow auto-dependent development outside the city and within the Toronto commuter-shed.

Yet negative impressions of the impacts of cars on cities – and restrictions on their use – have existed since the introduction of the new technology, not only in Toronto, but also across North America.

Stephen Davies, for example, writes that the automobile promised freedom of mobility, yet it escalated urban traffic congestion.  Automobility also demanded restrictions on its users through driver’s licenses, speed limits, and other government regulations.  During the 1910s, Toronto’s city council decided that police could summon drivers who parked cars on streets other than those designated for parking purposes.

Conflict between pedestrians and automobile users occurred as soon as cars began to drive on city streets.  At its worst, automobiles threatened the lives of pedestrians, especially children.  The Premier of Ontario, in 1910, remarked that the pedestrian “has the first right of the road.  The chauffeur who thinks that . . . he is entitled to the road, is utterly and entirely wrong.  He comes after the pedestrian and even after the man on the bicycle.”  The growth in car ownership by the 1920s, however, redefined the priority of respective urban travel forms.  Pedestrians became “jaywalkers”, a process US historian Peter Norton has also examined in his Fighting Traffic: The Dawn of the Motor Age in the American City (2008).

Debate over the benefits and costs of the automobile is now over a century old.  It shows no signs of ending, despite Mayor Ford’s recent declaration that “the war on the car is over.”