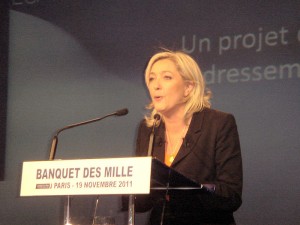 No, this isn’t the beginning of Marx and Engels’ Communist Manifesto, though that spectre (of Communism) has played just as important a role as this one in twentieth century European history. Today’s spectre is the spectre of fascism and it is not only haunting Europe, but has also infected North America. The problem with this spectre, though, is that like many ghostly things, it lacks a clear definition.

The April 25th edition of the Toronto Star features an article with which many liberal North Americans might be inclined to agree. Thomas Walkom’s article “Europe’s restraint agenda rekindling fascism” argues that recent austerity measures in Europe are pushing people too far and he writes that European rulers have “forgotten their own history. People will put up with only so much before they embrace extreme measures”. He cites as evidence of this the recent success of political parties of the far right in Europe, including the stunning electoral success of France’s Front national, led by Marine Le Pen. Walkom concludes his article by noting that only neo-Nazis are offering alternatives to the voting public in Europe and that this is not only obscene, but dangerous.

To be sure, the rise of these parties (though many of them have been around for decades – a fact often ignored by North American journalists) is indeed dangerous. Marine Le Pen’s electoral success should scare us all because her extremist views have clearly become palatable to the general electorate and there is little in the Western world that is more dangerous than a “legitimate” victory of the extreme right. However, it is also dangerous to use this language of ‘fascism’ to discuss what is happening right now in Europe, for several reasons.

First, calling these parties ‘fascist’ blinds us to what is actually happening in Europe. The term ‘fascist’ has, since the early heady days of Italian fascism, been a vague epithet to denounce a political enemy – and it often didn’t matter if that enemy was on the left or the right of the political spectrum. Historians and political scientists have been incapable of finding a useful definition of fascism, in part thanks to its vague usage in political discourse. The most meaningful definition, though it too is not perfect, is found in Robert Paxton’s work – because he recognizes that ‘fascism’ changes depending on the context within which it is found. We need to look at the situation in Europe right now and while we might see some similarities to the 1930s, they are, in fact, two different eras. The consequences of economic destruction in the 1930s will not necessarily be the consequences of economic destruction in 2012.

Secondly, and perhaps more importantly for real-world political affairs, is the fact that by using the language of ‘fascism’ we imply that this is a known enemy. Who hasn’t been taught about Nazi crimes? There is a tendency to think that if we recognize our enemy (i.e. if they are neo-Nazis) then we will also know how to combat them (i.e. using measures that have been used in the past). But part of the real danger even back in the 1920s and 1930s was that fascists and Nazis were underestimated – because their political opponents used dated understandings of political affairs to deal with them. European liberals in the 1920s and ‘30s tended to view, for example, Benito Mussolini as a new variation on old conservatism. Boy, did they regret that later on. And so it is today, that we need to assess – truly and honestly assess – these political parties for what they are, not what they remind us of.

If we want history to provide us with ways of understanding the world, then we would see the success of, say, the Front national as another chapter in an ongoing development of the radical right in France. Though it requires a little more work, it is far more useful to situate these parties where they belong – in geographically, historically, and temporally specific contexts. Do I agree with Walkom’s assertion that these parties are obscene? Yes, without question. But we need to understand why, as obscene as they are, they are attractive to European voters in 2012 and using the language of fascism will not help us achieve that goal.