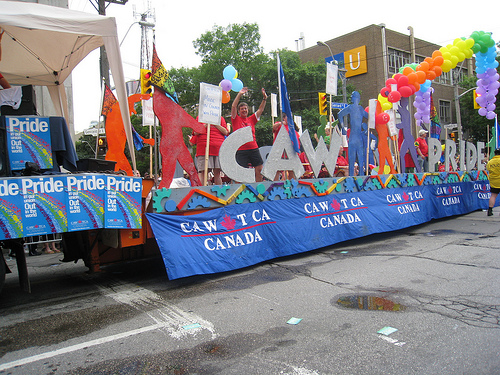 While there have been a number of labour-related subjects in the news recently, from the Elliot Lake tragedy  to the Ontario Progressive Conservatives’ White Paper on unions, one article in particular caught my interest. It was about the recent efforts of the Canadian Auto Workers union (CAW) to organize a number of demonstrations in support of continued access to safe, legal and accessible abortion. That this has turned out to be a controversial campaign did not come as a surprise, but I was interested in some of the comments made by a number of readers of the article.  Aside from being surprised at the small number of comments, especially on the issue of abortion (14 comments at the time of writing this), I couldn’t help but notice the surprise in some of the comments that the CAW would show an interest in, let alone take a position on, the question of abortion.

While adopting a pro-choice position on such a controversial issue might be considered by some to be a risky decision given the current anti-labour climate, the fact that the CAW did so should come as no surprise. This isn’t the first time that the CAW has publicly taken a position on a controversial issue indirectly related to the workplace. For example, the CAW/UAW has a history of supporting the rights of queer workers that goes back to the mid-1970s. In 1974, the Human Rights Committee of Local 195 of the UAW, located in Windsor, sent a memo directing its bargaining teams to negotiate for the inclusion of a non-discrimination clause that protected workers from discrimination on the basis of sexual orientation. While this was not achieved until a later date, their decision to address gay and lesbian civil rights in the workplace marked the beginning of a trend that would see a number of locals across the country recognize the importance of fighting for the rights of their gay and lesbian members. More recently, in 2004, Local 222 of the CAW in Oshawa spoke publicly in support of Marc Hall, a Catholic high school student who was denied the right to bring his partner to his prom. In this case, the aid provided by the CAW helped bring Hall’s fight all the way to the Supreme Court of Canada, where he was ultimately successful.

While the relationship between abortion rights, or the right of a gay high school student to bring his boyfriend to prom, and the everyday bread and butter issues affecting CAW members might not always be clear, the CAW’s adoption of the social unionism model has led it to embrace the view that workplace issues do not begin and end at the factory gates. Our private lives affect our working lives just as much as our wages affect our ability to support ourselves and our communities. Denying working-class women access to safe and legal abortion and family planning services affects working-class communities. As a result, this makes the abortion debate a union issue.

As one of the readers, Old Gregg, put it: “It seems obvious to me that CAW would weigh in on this debate. Women’s safety is workers’ safety.”

Mathieu Brûlé is a PhD candidate in the Department of History at York University. His research examines the construction of the relationship between gay and lesbian activists and the labour movement in Ontario in the second half of the twentieth century.