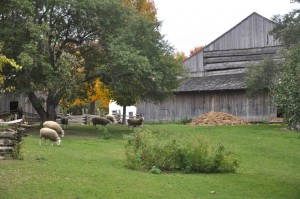 At all levels of classroom instruction, history teachers are faced with the challenge of meeting the needs of tactile learners in an environment that favours auditory learners. Large classes – York University’s Keele Campus averages 57 students per class – mean that lectures remain the most effective means of relaying information. This year, I was assigned to TA for Professor Molly Ladd- Taylor’s popular course “Growing Up in North America.” Her success as an educator is reflected by high levels of enrollment. Ladd-Taylor’s class can boast close to 200 students. The success of her lectures can be tracked through student comments online. In 2003, one student exclaimed “Makes the material interesting, is very accomadating [sic], is very well structured in the [sic] lesson plan.” Consensus remained in 2012 when one student posted “Amazing lectures….Easy to understand, great, interesting!!!” Needless to say, I was thrilled to join Professor Ladd-Taylor’s teaching team. And, my excitement grew when Professor Ladd-Taylor expressed an interest in alternative learning methodologies and provided me with free range to design and develop a voluntary field trip.

I studied the syllabus, trying to imagine links between course readings and local Toronto history sites. My challenge was logistics. If all 200 students chose to participate, who could accommodate them? I saw St. Lawrence Hall as an incredible space to teach students about the role of the abolitionist press in Canada. Here was an urban space that could be tied to our reading of Harriet Jacobs’ “Incidents in the Life of a Slave Girl (1861).” Here was an opportunity to affirm the importance of historical, seemingly American, movements to home. But, I couldn’t easily trek 200 students from York’s Keele Campus to downtown within a two hour window.

While it didn’t link directly to our topic schedule, Black Creek Pioneer Village seemed like the ideal place for students to experience the differences between working-class and middle-class childhoods. The site could easily manage 200 persons, allotting one tour guide per group of twenty. And, it is within walking distance of campus. Geography in our favour, I believed that a tour of Black Creek Pioneer Village could enliven the course theme of difference and sameness across cultures, specifically class culture in the late Victorian era.

Research into the site suggested that Black Creek Pioneer Village targeted a younger market. The website’s feature image for October featured two boys dressed as skeletons to promote “Halloween Hootenanny.” Teaching links had labels like “Fun Activities for Kids” – “kids” implying that my undergraduate students may have outgrown site offerings. When I contacted the education department, however, Jennifer D’Attolico assured me that Black Creek Pioneer Village could accommodate higher learners. Despite tailoring their site to primary educators, Black Creek’s Education Department actively develops curriculum. D’Attolico assured me that her team could deliver a tour to highlight class differences – how they manifested themselves in labour and dress. On 13 October 2012, Professor Ladd-Taylor, the 1080 Teaching Team, and a handful of students discovered that Black Creek Pioneer Village can engage on meaningful levels with higher learners.

Students first explored a farm household. Miriam, our tour guide, introduced this space as a typical rural, working-class home. We were then told about the gendered division of labour. Miriam pointed out sorghum growing in the yard, suggesting that women – young and old – were responsible for harvesting sorghum and making brooms. Brooms were, arguably, a woman’s tool. Daughters and/or wives would be responsible for sweeping floors and cleaning ashes from the fireplaces.

One of my students, E.H., was surprised to discover how the concept of “separate spheres” manifested itself in household design. For E, walking into the farmhouse to find two sets of stairs reinforced the gendered division of labour learned in class. The girls had to walk through their parents’ bedroom to reach their sleeping quarters – there was no direct exit. The boys, by contrast, had their own set of stairs. The boys’ stairs did not cross through their parents’ room. Instead, the boys’ stairs connected them more easily to the outdoors. Miriam suggested that the boys would be responsible for running out into the night if they heard sheep crying – it was the boys’ job to help manage livestock. For E, course material gained new meaning on-site. As an educator, it was rewarding to hear students like E exclaim “I never knew that!” The village brought our readings to life. The village made history real by allowing students to know – by sight, by touch – how historical subjects lived in the world. 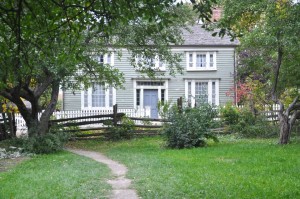 Access to material culture allowed students to better conceptualize the 19th Century class divide.  While in the farm house, Miriam pointed out a hoop skirt hanging on the wall. She suggested that most girls would own hoops, but that working class girls would rarely sport them. When we visited the middle-class household, by contrast, we were greeted by a costumed interpreter wearing a hoop skirt. Miriam explained how dress marked class in small villages like Black Creek. This woman’s hoop told onlookers that she would not be on her hands and needs; she would not be doing domestic chores like scrubbing.

Miriam then pointed out the woman’s white ribbons. These ribbons, Miriam suggested, were meant to tell onlookers that our costumed interpreter would not be doing the laundry – she was freed from household drudgery by her wealth. Hair styles too, we learned, reflected class status. Middle-class girls, like our costumed interpreters’ daughter, would wear her hair in ringlets. She had leisure time available to style her hair with a curling rod. The working-class girl, however, would wear her hair in braids so that it did not interfere with her chores. When we moved onto the second floor, questions about hanging portraits demonstrated that students were grappling with new material. They asked if the subjects’ curls were meant to display status, looking at class displays in displays of wealth.

A week after our fieldtrip, I was excited to see how this experience encouraged meaningful engagement with seemingly unrelated texts. We were still studying 19th Century America, but had zoomed in on the experience of street children in urban centres. For tutorial, students were asked to read Horatio Alger’s Ragged Dick, a novel that revolves around Dick, a fourteen year old bootblack, and his experiences working on (and, eventually, off) the streets of New York City. My students were able to connect their Black Creek experience with Horatio Alger’s emphasis on appearance in Ragged Dick.Dick was unrecognizable as a bootblack in Frank’s suit, they suggested, because what people wore was an indicator of wealth and labour in 19th Century America. A field trip designed to enliven themes of difference and sameness provided students with a lens through which to better analyze their independent readings.

Given the overall success of this field trip – not in numbers (we had few participants), but in student engagement – I highly recommend Black Creek Pioneer Village to university educators with large class sizes and an interest in 19th Century Canada. D’Attolico proved that her staff could engage meaningfully with undergraduate students – despite a website that targets a much younger market. Subsequent tutorials have proved that my students found value in their experience. To my surprise, they used the field trip not only to make sense of past lectures but to engage with present readings.

2 thoughts on “Beyond the Classroom: Taking a Large University Class on a Field Trip”