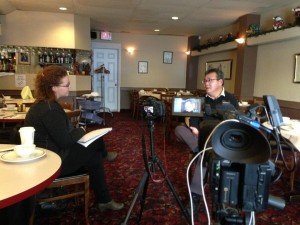 The author interviewing the owner of the Silver Inn

I recently took a trip to a Calgary restaurant where the most iconic of Chinese-Canadian dishes originated.  The restaurant is on Centre Street at 27th Avenue North and you would likely miss it unless you looked for the sign reading “Silver Inn.” Two colleagues from the Royal Alberta Museum (RAM) also  made the trip from Edmonton to Calgary to record the interviews.  When the interviewee is the owner of the first restaurant to serve “ginger beef,” the footage has to look better than good.  It must look delicious.

Making history look good is a big part of designing a museum exhibit.  As sites of public history, museums suffer from the stereotype of stale rooms filled with artefacts hidden behind glass and a sleepy security guard ensuring nothing happens to the precious items on display.  This idea of museums persists in spite of decades of interesting and innovative exhibits and new methods designed to engage the public with museums.  Food is still prohibited in exhibits, but high-quality video of a dish or a detailed description of its ingredients can create the same Pavlovian reaction as the smells of a busy kitchen or a table set for a feast.  With this in mind, we went to Calgary in search of footage to add this dimension to the RAM’s Chop Suey on the Prairies exhibit.

The Silver Inn was the first restaurant in Calgary to offer Peking-style dishes.  It opened in 1975 in a small space on 4th Street Southwest.  For the first few years, the establishment served mostly the burgers, fries, soda, and milkshakes typical of Chinese-owned restaurants across the prairies.  The menu listed Peking dishes, but customers were not interested in trying them.  But after a few years, the Cheung family took the risk and dropped the western side of the menu and focused exclusively on Peking cuisine.  Calgarians were hesitant to try the dishes, but they slowly came around to these new flavours.

The dish known as ginger beef is based on a traditional Peking dish of beef cooked so that it is chewy like a jerky, deep fried, and seasoned with orange peel and chili sauce.  The chef thought the dish would go over well with Calgarians because it was similar to popular pub food.  Customers liked the flavour, but not the chewy beef so he began experimenting ways to make the beef a similar texture to French fries.  The resulting dish – deep fried shredded beef in chili sauce – became an instant hit with customers.  The perfectly crunchy exterior hid beef that was cooked but still tender.  The sauce tasted so different from standard fare that people started asking for the dish as “that ginger beef dish” – even though there was no ginger in it!

Yet capturing the essence of an iconic dish for a museum exhibit poses a challenge.  Museums have strict rules surrounding food and drink in exhibit space for both practical and conservation reasons.  Maintaining a fresh bowl of ginger beef within an exhibit would be a logistical nightmare, not to mention the temptation to visitors that a bowl of food would offer.  Furthermore, food is a no-go in exhibit spaces because it attracts bugs, and these critters eat the organic material that constitutes most artefacts.  Knowingly exposing material in a museum’s collection or on loan from generous donors to conditions that would lead to its disintegration is a sin in the museum and archive community.

The question is: when planning and designing an exhibit, how best to use audio and video to conveying the look, smell, and taste of food to visitors?  A museum could interview someone connected with the invention of a dish, like the RAM did with ginger beef.  A sound bite that explains how a dish came to be gives people an extra treat and something to share with others; a piece of trivia to hold onto for the future and a reference point for remembering the exhibit experience.  But information is not enough to make visitors’ mouths water. 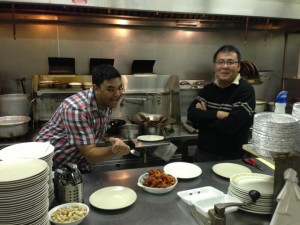 To successfully convey the essence of food without tasting or smelling it, the visual must be hyper-realistic and the sounds must be crisp and clear.  When these elements are brought together, the visitor enters a mental place where they can almost smell what is being cooked.  This all must be done without resorting to the “money-shot” of food programs everywhere: a host eating the food, making sounds of a delighted palate, and gushing over the dish.  To do so would distract visitors from the content of an exhibit and make a spectacle of what is a supporting component of a larger narrative.   Play it too safe and visitors would remember neither the visual nor the story behind the dish.  Overdo it and the dish becomes a distraction from the rest of the content, not to mention the possibility of criticism about lewd content in a public museum. But get it just right and people leave the exhibit craving the dish.

Such considerations influenced the upcoming Royal Alberta Museum exhibit Chop Suey on the Prairies.  Conveying the essence of Chinese-Canadian food is of core importance to successfully telling the story of Chinese restaurants.  However, the food is only one piece of the Chinese experience in Canada and cannot overwhelm the rest of the story.  The food — whether ginger beef or chicken balls or chop suey — is a reflection of the unique situation of Chinese immigrants to Canada before the federal government repealed the Chinese Immigration Act of 1923 in 1947.  The dishes that introduced Canadians to Chinese cuisine are a mixture of Chinese cooking techniques, ingredients available in Canada, a willingness of people with non-Chinese backgrounds to try new flavours, and the emergence of a strong Chinese community in the West.  The melding of traditional Chinese flavours with a texture common to English pub food created Ginger Beef, and this is one story the RAM tells at its new exhibit.

Lauren Wheeler is a public historian specializing in mountain parks and environmentalism in Alberta.  She is currently a project assistant at the Royal Alberta Museum for the upcoming Chop Suey on the Prairies exhibition.  Follow Lauren’s blog at www.canenvirorock.com.