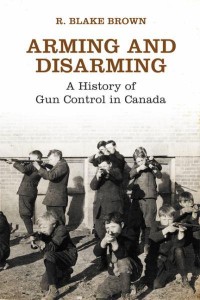 A Review of Arming and Disarming: A History of Gun
Control in Canada
R. Blake Brown
The Osgoode Society/ University of Toronto Press
Hard Cover, 349 pages, $70.00

Guns in and around children in schools are frightening.  That is why gun culture and firearms control totally dominated the news media in the wake of the horrific shooting rampage on December 14, 2012 at Sandy Hook Elementary School in, of all places, the postcard perfect town of Newtown, Connecticut.

With students, parents and families in mourning or emotionally distraught, on both sides of the border, the Canadian news media was quick to jump on the “Newtown Massacre”  as the latest example of an American gun culture abhorrent to most Canadians. Sharp contrasts were drawn between the trigger-happy American republic and the reputed “peaceable kingdom” of Canada.

Interviewed the morning after on CBC Radio’s The Current, R. Blake Brown, author of Arming and Disarming, was expected to bring those popular Canadian-American national stereotypes into sharper relief.  On air and in his new book, Brown resists that trap and, instead, spins a more complex, balanced, and judicious history of guns and firearms control in Canada. If anything, Brown’s scholarly work raises questions about popular perceptions fuelled by the mass media and perpetuated in Michael Moore’s Oscar winning 2002 documentary, Bowling for Columbine.

Brown, a soft spoken Saint Mary’s University history professor, was a little puzzled by the angle taken in the CBC Radio interview. “I was probably there to provide a little Canadian context,” he told me recently, but he was left with the distinct impression that “the show’s producers found it surprising”  that “the gun control debate had a long history before the 1989 Montreal massacre of young women.”

Heated public debates over gun control tend to be little more than a skirmish on the borderlands in a much larger battle over gun violence, shootings, and the right to bear arms in the United States.  Since the passage of the 1995 Canadian Firearms Act and the $1 billion spent on a national long gun registry, opposition to gun regulation has actually risen, especially in rural and small town Canada. Our national gun control debates, Brown points out, demonstrated “a remarkable lack of awareness of how and why Canada regulated firearms in the past.” It is precisely that gaping hole which his book most effectively fills.

Gun regulation is hardly new and Brown traces its origins back to early contact with Indigenous peoples in British North America, long before Confederation.  The earliest laws aimed to limit the access of Indigenous peoples to guns, driven by fear and defended with crudely racist, ethnocentric, and xenophobic rationales.

The largely untold history is fascinating.  Public perceptions of high crime and periodic spikes in crime, along with the introduction of more dangerous weapons, nudged Canada to gradually adopt a legislative framework stricter than most jurisdictions in the United States.  While Canadians stocked up on shotguns and rifles, handguns and semi-automatic weapons were far less prevalent.

Resistance to regulating firearms drew support from a range of traditional and rather unexpected sources. Most Canadian legislators, up until the 1970s, were convinced that the state lacked the ability to adequately enforce gun laws.  In early Canada, Brown notes that the individual rights of the English included the individual’s right to property, the right to bear arms, and the right to protect one’s person.

Brown demonstrates conclusively that guns were integral to early Canadian society. Hunting and fishing culture thrived in rural areas where regular citizens used firearms to kill pests, hunt for food, and protect their property lines.  Sons of the wealthy and propertied upper classes relished the freedom to go recreational hunting in private clubs or on private lands, or to practice target shooting on weekends. It will also come as a revelation to learn that many nineteenth-century lawyers, including John A. Macdonald of Kingston, believed in the limited right to bear arms.

Brown does a masterful job of reconstructing the historical phases in the gradual evolution of gun control.  Prior to 1867, the threat of foreign, mainly American invasion, and the need for local militia meant firearms restrictions were limited to discharging weapons in cities, carrying weapons at political meetings, or to polling places. In the 1850s and 60s, Halifax was “one of the most violent cities in North America,” according to Brown. “Soldiers drank, caroused, visited brothels, and occasionally killed,” but “few murderers used guns.”

From 1867 until the Second World War, the Canadian state continued to encourage not only the ownership but the use of rifles.  Some restrictions were imposed on youth to prevent mainly poor, working class lads from possessing revolvers.  Adult ownership of firearms was widely accepted as an outward expression of masculinity and, in the inter-war years, most gun control was aimed at keeping weapons out of the hands of “untrustworthy” residents. Stricter gun regulations in Canada had to wait until after the Second War and such measures were fiercely resisted by hunters, gun collectors, and target shooters.  By the 1960s, American urban ghettos were in upheaval and gun violence ran rampant, helping to change the dynamics in urban Canada. Only then did a new argument surface –that all firearms, including rifles and shotguns, were dangerous weapons needing regulation.

Brown is clearly struck by the determination and resilience of Canadian gun owners in resisting state regulation of firearms.  It may well stem from his upbringing.  Born in Summerside, P.E.I., he was raised in a large family in small town Bridgewater, NS, where his father shared with him his appreciation for recreational hunting. What’s his personal take on the whole gun control controversy?  “While I’m not supportive of relaxing gun control, “ he says, “I try to see where the mostly white, older and disempowered gun owners are coming from.” Indeed, that is a real strength of the book and what distinguishes it from other rather one-sided treatments of this volatile subject.

Blake Brown’s Arming and Disarming is a truly fine piece of scholarship, six full years in the making.  In the wake of the Newtown school rampage, everyone was abuzz over the excesses of American gun culture.  Much of the Canadian media coverage, according to the author,  serves to “illustrate how different we are and only confirms how crazy they are down there.”  If that is so, this authoritative, well-researched book will go a long way toward countering such simplistic cross-national comparisons.

This review originally appeared in the Halifax Chronicle Herald. Published with permission of the author.

One thought on “Gun Control: Filling-in the Missing History in Canada”