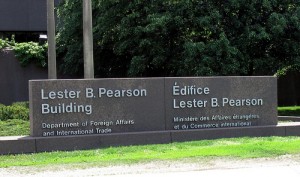 Recently, I was lamenting the challenges historians face in the form of changing names of various government organizations in Canada: The Canada Food Board, the Health League of Canada, and Board of Broadcast Governors are now the Canadian Food Inspection Agency, the Canadian Public Health Association, and the CRTC respectively. Researching the past often means paying attention to changes in name and in meaning. It is almost like stepping into a foreign country.

Renaming government organizations and buildings to fulfill a change in mandate – be it political or administrative – is not a new trend, though the current government seems to be doing more of it with less resistance from Canadians. The Toronto Star recently published an article discussing the Government of Canada’s decision to rename various government offices in Ontario and Quebec as part of the efforts to commemorate the bicentennial of the War of 1812.

Most government buildings are named for the legacy of civil servants or politicians. Here, it is an exercising in branding: The Brooke Claxton Building in Ottawa, which primarily houses Health Canada employees, is named for the former Minister of Health and Minister of National Defence, a man with no skeletons at first glance, though scandal rocked his Defence administration at the time. The building’s name has stood the test of time. On the other hand, former Ottawa mayor Charlotte Whitton’s anti-Semitic views kept her name off the new City Archives building.[1] The building was instead named for James Bartleman, Ontario’s 27th Lieutenant Governor. In another instance, it wasn’t until the Historic Sites and Monuments Board unveiled a plaque to commemorate Dr. Helen MacMurchy that attention was given to her dark past.

Back to the exercise in branding during the War of 1812 Bicentennial. Through an Access to Information request, the Star article revealed that Parks Canada expressed concern about naming a government building at 1 Front Street in Toronto for Laura Secord: ““Naming anything after Laura might confuse the building as a property of the chocolate company — the Laura Secord Building!” (In the end, a building in St. Catharines, Ontario was named for her.) Equally interesting was the proposal to name a building outside of southwestern Ontario for Tecumseh, who fought and was killed in the Battle of the Thames. In the end, it appears as though a building in Montreal is set to be named for him. Dr. Cecilia Morgan, a professor at OISE, will talk about the commemorations of Laura Secord at a Heritage Toronto lecture on April 3.

The commemoration of individuals and the politics of place are complex – hardly something that I can scratch the surface of. It is through the naming and branding of place that we create its identity and its politics. Our public spaces, be they streets, government buildings, archives, museum galleries, or squares, are settings – active participants in social interactions. The names and meanings of place associated with these settings are thus a most important expression of power. French philosopher Jacques Derrida suggested in 1974 that naming is a taxonomic strategy, which is also a manifestation of power. An obvious example of this is Saint Petersburg, Russia, known from Vladimir Lenin’s death in 1924 until 1991 as Leningrad. Because landscapes and streetscapes are familiar—and therefore, rarely questioned—they easily become instruments to be imbued with ideas, and are a way to convey arguably complex histories through a simple structure.

The removal of a name has a similar effect. In September 2011, Foreign Affairs Minister John Baird requested the removal of “Lester B. Pearson Building” during a makeover of his business cards. While the name is still held by the building, it no doubt raised important questions about the historical agenda of the Conservative Party to erase a Canadian identity rooted in liberalism.

It’s therefore no wonder that federal politicians are working to rename government buildings by appropriating the names and histories of War of 1812 heroes and heroines. The War of 1812 has seen greater light in the public sphere since the Harper administration, but is still something that few (myself included) fully understand.

There is some very good work being done on the War of 1812 and many organizations are using this opportunity to engage their audiences in the histories of the War of 1812. However, because the government is caught up in the acts of creating heroes and monuments, as well as rebranding national narratives, critical research is often pushed to the background. It is unfortunate that these works are often overshadowed by monuments that say less about the past and more about the present. And because the media generally portrays history and commemoration as inherently “good for you” (with the exceptions of controversial matters), it is rare that the public asks important questions about how its current government conveys the past. But we should.

1. The Canadian Jewish Congress claimed that she was “instrumental in keeping Jewish orphans out of the country.” However, it appears that her views in the 1930s and 1940s went beyond anti-semitism and included non-Anglo immigrants, but that later in life she nominated Lorry Greenburg, Ottawa’s first Jewish mayor, for the role, and was praised for civic leadership by the Jewish press. Whitton’s legacy is a shining example of the complexities of history and commemoration.