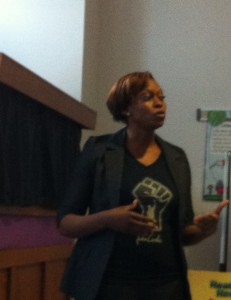 On March 27th Funké Aladejebi, a PhD candidate at York University, told the compelling story of how black organizations in Toronto used education to combat racism by making connections to “Africa” and adapting the language of Black Power to a Canadian experience. Her talk was part of the 2013 History Matters series.

You can click here to listen to a podcast of the talk.

In what follows, Funké reflects on what inspired her dissertation topic on African Canadian Women Educators in Ontario, 1940s–1980s, which investigates the ways in which African Canadian women confronted and navigated socially constructed boundaries of racial alienation and inequality.

Note: Pamela Sugiman’s talk has been postponed until further notice.

As a young woman attending university in Canada, I knew very little about African Canadian history outside of the mainstream discourses about the Underground Railroad and Harriet Tubman’s perilous journey to Canada, better known as ‘Canaan Land’.  As a result of this narrow focus of black history in Canada, I knew even less about the ways in which blacks negotiated ideas of identity across varied regions of the country. Thus, when I read the works of famous black writers such as James Baldwin, Amari Barkara, and Maya Angelou, I understood them to be distinct Black American writers because, after all, that is where racial discontent and the black presence mattered most, right?

I could not be more wrong about this misconception; in fact, it was not until I entered graduate school that I became aware of the richness and depth of African Canadian history.  When I began my dissertation research on African Canadian female educators in twentieth-century Canada, I became fascinated by the complex, contradictory and multiple ways in which African descended peoples negotiated blackness in Canada.  So when I read that black militant leader Rocky Jones declared to Toronto Daily Star reporters in 1971 that Canada’s black revolution was underway, I had never considered that black militant rhetoric was a feature in Canadian history or that it had a distinctly Canadian perspective. [1]

In fact, by the late 1970s, many Canadians were shocked at this increasing black consciousness and militancy occurring in various parts of the country, especially in urban centres like Toronto where black immigration steadily increased following changes to Canada’s immigration policy in 1969.  While many Canadians believed racial discontent to be an isolated “American problem,” Canada’s growing black population recognized the paradox of national policies that discouraged Human Rights violations nationally but largely ignored blacks from obtaining full citizenship rights within its own borders. It is within this context that Toronto’s growing Caribbean, African, and Canadian-born black populations adopted a more radical and Pan-Africanist stance to combat issues of prejudice and discrimination in housing, employment and education. Black Torontonians embraced pan-Africanism by maintaining a strong connection to “Africa” as diasporic peoples, and adopted and manipulated Black Power rhetoric to fashion a brand of radicalism unique to the city and pressing urban issues.  In education in particular, African Canadians used Black Power to create educational initiatives such as the Black Education Project, the Thorncliffe Park School and the Black Peoples Conference. Each project was intended to advocate for political – and at times radical – action.  Often younger in age and increasingly from the Caribbean and Africa, black Torontonian organizing at the time reflected a change in African Canadian activism and ideology that was influenced by age, place of birth, and the rise of Black Power publicity and rhetoric in the media.

The various cultural organizations and programs created during this time period worked to unify African Canadians across geographic boundaries, languages, and genders. The Black Peoples Conference held in Toronto in 1971 was one such initiative that worked to mobilize blacks in Canada and provide political direction. Spearhead by the National Black Action Committee and the National Council on Black Education and Culture, the conference hoped to unify Canadian-, Caribbean- and American-born blacks as “one”.  It was a clear attempt to move beyond individual action and mobilize as a large black political body in the Toronto area.   As diasporic peoples, the overall theme of the conference was to ‘have a free and united Africa, so that all Black people can be truly liberated.’ [2] Many believed that this recognition of unity despite difference would allow strong solidarity among blacks in Canada and grant them access to social influence and cultural power.    The Black Peoples Conference would be one of many initiatives and organizations created in the 1970s to speak to the growing black consciousness developing amongst African Canadians in the city.

Despite this development among blacks in urban cities, African Canadians not only adopted, but also changed the language of the Black Power movement in relation to the Canadian context.  In hopes of being viewed as less militant and less threatening, some of these organizations tried to emphasize a non-aggressive form of racial pride. It seems that the goal was not to take hold of equality by violent action, but to unify in such a way that African Canadians could no longer be ignored. Therefore, Black Power in Canada was different from its American counterpart given its ability to recognize and acknowledge its divergent black population; one that varied according to their geographic origins but remained connected to one another as diasporic peoples.  The anti-colonial and liberation struggles that took place in their ‘homelands’ also exemplified the importance of collective action and gave them the organizing and ideological knowledge necessary to advocate for change within their local regions.

Black radicalism in Toronto also differed from the United States in that it did not foster large-scale social demonstrations, but rather smaller movements that varied depending on demography and the extent to which racial discrimination was felt in local areas. In the name of self-preservation and state support, the activism of blacks in Toronto did not reach the international notoriety that other movements in Africa, the United Steates and the Caribbean did.   However, these organizations encouraged and motivated black educational equality through community activities and cultural projects.

Essentially, the legacy of black radicalism in Canada reveals the unevenness and richness of African Canadian lived experiences. Whether it be through  Toronto based clothing brands like Live it Wear it or through  community organizations like Black Action Defence Committee – Canada, black Torontonians, and African Canadians at large continue to build upon the legacies of African Canadian political activism and organizing through education.

Funké Aladejebi is is currently a Ph.D student (Year 5) in the Department of History at York University focusing on African-Canadian women as educators in the 20th century. Her  Ph.D. dissertation will outline the importance of African Canadian women in sustaining their communities and preserving a distinct black identity within restrictive gender and racial barriers. Funke strongly believes in the importance of studying the past as an avenue for understanding the present.