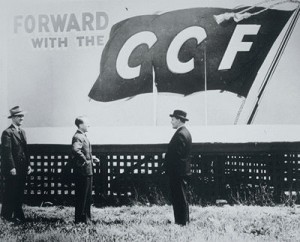 While it is too soon for the historian to comment on the long-term effects of recent changes on the Canadian political landscape, the larger rightward shift is perhaps best evidenced by the federal New Democratic Party’s decision to “modernize” its constitution at its recent convention by “toning down” references to socialism. Pointing to “pragmatic” economic policies that made the convention floor, one MP went so far as to say “the party is growing up.” It is indicative of our own modern times that alternatives to liberal and neoliberal orthodoxy can be so readily cast as anti-modern. This Whig style of history-telling, which presupposes improvement as natural to the passage of time, is not just questionable history; it obscures the many ways history can and does repeat itself, widening the path for us to repeat its mistakes. Framing a political shift to the right as “modernization” is arguably much more suited to Orwell’s 1984 than 2013.

While socialism and capitalism are often posited as mutually exclusive, it is important to note that most twentieth-century political experiments have combined elements of both, from the state-run capitalism of the Soviet Union to the limited social programs implemented in the United States of America, virtually every modern nation-state has combined socialist and capitalist elements to varying degrees.

Neoliberalism in its current form, on the other hand, is incompatible with even the most limited forms of socialism, in that it is based in unfettered free market ideology. The “neo” is something of a misnomer here, in that this political ideology very much harkens back to nineteenth century classical liberalism. Indeed, in the 1930s, when the failure of free market orthodoxy achieved widespread consensus, neoliberalism was used to describe what was then a new form of liberalism, one which promoted a social market economy, where state regulation and management of the economy was viewed as a modern solution to an outmoded economic system. The rise of socialism in this period also played a key role in shifting liberal economic theory to the left.

This was evidenced in Canada by the founding of the Co-operative Commonwealth Federation in 1932. Forming the first social democratic government in North America in 1944, its growth in popularity in this decade pulled the Liberal Party of Canada to the left, leading them to adopt many elements of the CCF platform to maintain electoral power.

Of course, the CCF, and its successor, the NDP, have rarely campaigned or governed on pure socialist principles. As some historians illustrate, social democrats in Canada have a storied history of virulent anti-communist thought and action. As Murray Cooke aptly illustrates, the party also has a long history of attempting to redefine itself, subsequently distancing itself from its more radical roots. Ian Milligan’s exploration of past and present CCF and NDP policy illustrates how the party line has shifted over time. Its current policies are much more moderate than those put forward by its founders.

Yet, despite the moderating tone of Canada’s social democratic party over the course of the twentieth century, and its inability to gain electoral power on the federal scene, this third party has had a significant impact on the nation’s political, social and economic culture. In contrast to the two-party system of the United States, where social gains were subsequently much more limited, Canada’s political culture and national identity have been more deeply tied to left-leaning policies and practices. This is perhaps nowhere more evident than with Canada’s system of socialized healthcare, which has become so deeply ingrained in national consciousness that even the most hardcore supporters of neoliberal orthodoxy – in rhetoric if not in practice – the Conservative Party of Canada, must pay continued lip service to this socialist ideal. This is because an overwhelming majority of Canadians continue to believe that human health and well-being should come before personal profit, and that our ability to live a long, healthy life should not be determined by socioeconomic status. This is a form of social ownership in action, and one example of how social democracy in Canada has become part of its national fabric.

Granted, the new preamble to the NDP constitution recognizes its “social democratic and democratic socialist traditions,” but so too is this tradition largely relegated to the past, as the party commits to a future that acknowledges only its  “best…insights and objectives,” leaving quite a bit of room for interpretive flexibility. Gone now are references to social ownership; instead, New Democrats “believe in a rules based economy.” In essence, federal New Democrats have discursively embraced mid-twentieth century liberalism.

Analyses of the long-term effects of this on the Canadian political tradition are best left to future historians. Will this be cast as another plank in Ian McKay’s liberal order framework in Canadian history? Will the Liberal Party of Canada maintain their longstanding adherence to twentieth-century liberalism, or will they revert even further back to the “new” form of nineteenth-century liberalism that has regained increasing global domination in recent decades? Will this be a first step towards returning to a two-party state in Canada?

One fact remains: there is absolutely nothing “modern” about adopting a political ideology that is almost a century old, and which dates back to the same era that the CCF was founded. Framing this shift as “modernization” is an insult to the many people who dedicated their lives to building a real alternative to liberalism in its many forms. It leaves them as the “unperson,” vapourized from the “modern” political record, their history and role in a larger project of modernity erased. It doesn’t get much more Orwellian than that.

Christine McLaughlin is a PhD Candidate in History at York University and Co-Editor of ActiveHistory.ca.