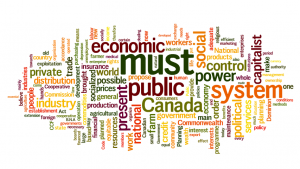 With politicians out on the hustings, what better time than to go through the old political speeches, manifestos, and platforms. Using Wordle, we can throw them up and look at word clouds. They’re not just pretty, but they can let us see the evolution of political thought and what words were capturing Canadians. They also let us see what things remain the same: most Throne Speeches over the last 15 years are nearly identical, stressing ‘government,’ ‘Canada,’ ‘Canadians, ‘etc. But we can see discontinuities: the 1933 Regina Manifesto, for example, contrasted with contemporary NDP promises and platforms (‘family’ and ‘home’). Reading all the documents might be preferable, but this is quick (it takes a minute to produce the picture at left) and has great possibilities for dealing with large quantities of information.

A proviso: this isn’t stunning analysis. It’s more just a demonstration of how we could take textual information, throw it up into a visual format, and then see changes over time. The examples I use might seem straightforward to some of our readers. But you could put these down in front of people who aren’t familiar with the story, and see how the CCF of 1933 is demonstrably different than the NDP of today.

What is a word cloud? Basically, it goes through a text, counts how often particular words appear, scrubs out ‘stop words’ (which are common words like ‘the’), and then throws them up on the screen. If the most common word was ‘Canada,’ it would appear both larger and bolder. If the least common word was ‘socialism,’ it either wouldn’t appear at all or in tiny, almost imperceptible text. The clouds here were created using Wordle.net, although you could make your own with a simple programming script. Wordle is more accessible, however, and much prettier.

The 1933 Cooperative Commonwealth Federation’s Regina Manifesto word cloud captures some element of the spirit. MUST is the most important word, capturing the urgency which its drafters saw the need to profoundly change Canada’s economic system. Others: PUBLIC, SYSTEM, ECONOMIC, POWER. Canada appears to a lesser degree, and also some words you wouldn’t see in a contemporary stump speech: capitalist, socialized, even ownership and workers sneaking in there. 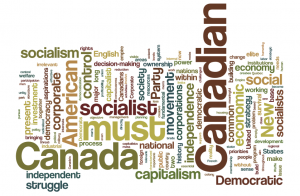 The 1970 'Manifesto for an Independent Socialist Canada' (Waffle Manifesto)

If you were to then throw up the 1970 Waffle Manifesto, you’d see ‘Canadian,’ ‘Canada,’ ‘American,’ capturing the national aspects of it. But still socialist, socialism, capitalism, struggle, capturing the radical critique of the present order. 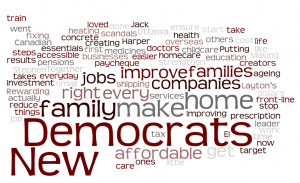 The NDP Platform (c. early April 2011 before it's been fleshed out)

It gets trickier when you want to compare it to recent NDP platforms, as manifesto has faded in favour of sound bits and short less precise promises. But if we put the 2011 NDP platform in, we see different emphases: family, families, make, home, affordable. Gone are the imperatives, the ‘musts,’ the ‘workers,’ the ‘capitalist’, other such analysis. If you’re teaching or trying to understand the shift in political discussion based on these textual materials, why not convert it into visual form for some quick and easy analysis? In about 5 minutes, you can make a point to an audience (many of whom like to actually see stuff, like me, instead of just read it).

Here are some other examples: the Students for a Democratic Society Port Huron Statement (1962 and the Liberal Red Book (1993). 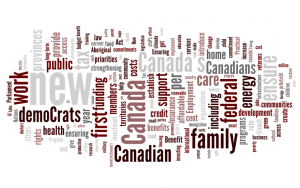 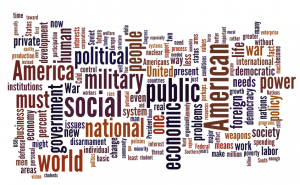 1962 Port Huron Statement by Students for a Democratic Society 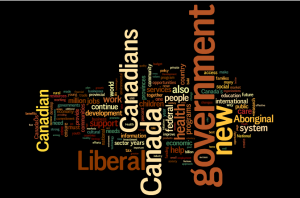 The 1993 'Little Red Book' for the Liberal Party