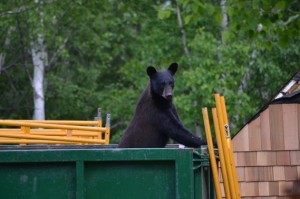 A marauding black bear near the author’s home in Sudbury, Ontario. Photograph courtesy of Marthe Brown.

Ontario had its last spring black bear hunt fifteen years ago. Dating back to 1937, the province’s spring hunt was primarily for non-resident hunters. But spring hunting picked up in 1961 after the Department of Lands and Forests declared the black bear a game animal. By the mid-1990s, spring bear hunting had been well established as a significant revenue generator for northern Ontario communities and an important management tool.

Around this time, however, opposition flared up over the spring hunting season, largely over the ethics of bear baiting and the fate of orphaned cubs after the accidental shooting of mother bears. Consequently, an amalgam of animal welfare, animal rights, and conservationist groups – colloquially known as the “Bear Alliance” – organized a campaign to have the hunt repealed. By 1999, following aggressive marketing and political lobbying, the Bear Alliance succeeded in convincing Ontario’s Progressive Conservative government to abruptly cancel the hunt.

In the immediate aftermath of the decision, hunters, outfitters, and residents in northern Ontario charged that emotion and politics had trumped science and conservation. They called supporters of the decision, “bleeding heart liberals” and denounced their opponents’ authority on the matter because of their overwhelmingly non-rural residency. Throughout the debate and afterwards, critics referenced “urban southern Ontario” and even “Toronto” in a derisive manner. The idea that people living in areas far removed from bears had influenced government policy was viewed as unacceptable; even more so because it was done using emotionally charged arguments about orphaned cubs. As a result, the idea of local knowledge and place forms an interesting part of the debate that still persists today.Many hunters and outfitters are not university-trained biologists but they still possess an extraordinary amount of technical knowledge about the animals because they reside or work in black bear habitat. Meanwhile, the provincial government also has a cadre of professional scientists with years of technical expertise learned on the ground. Despite the government’s competency in deciding wildlife policy, as well as its ability to exercise the authority in cancelling hunting activities that are deemed unethical or problematic, the conversation always seems to boil down to northern Ontario residents versus bureaucrats at Queen’s Park. Neither group possesses superior knowledge over the other, but who is in a better position to make policy decisions? People living in bear country or those living outside this realm? Do we need to accord greater significance to the perspectives of people whose understanding has been informed by place? For example, does living in Sudbury versus Mississauga make your pronouncements about bear management more valuable? 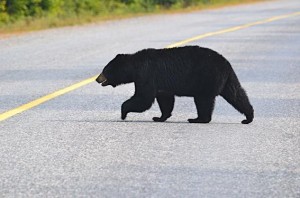 Currently, the idea of proximity of place forms an interesting facet to the conversation about bear management in general and spring hunting in particular. People who live, work, or vacation in bear country are obviously more likely to encounter bears than those who primarily reside in urban areas where bears have been extirpated. Although encounters with bears are usually benign, their large, powerful bodies means there is always the remote chance of an attack. In April, a black bear nearly killed Joe Azougar at his cottage in Cochrane. More recently, a bear charged an Ontario Ministry of Natural Resources (OMNR) biologist in Foleyet.

After these respective incidents, many people in northern Ontario took to social media and suggested these negative encounters were proof that the province sorely needed to reinstate the spring bear hunt to keep bear numbers in check. However, no correlation exists between frequency of attack and spring hunting to suggest that this would have mitigated these recent episodes or even others in the past. Yet living in these areas inherently requires a higher degree of personal responsibility and understanding of risk and danger. Consequently, those in close proximity to bears often have a different understanding of the animal and as such, possess different expectations over questions of safety and management.

Although there is no evidence to link a lack of spring hunting to the occurrence of attacks, these concerns should not be trivialized. Rather, such concerns should be carefully analyzed in concert with current scientific studies. Residents that share their homes with bears have genuine concerns about the protection of their property, pets, and family that are informed by their places of residence. These issues, of course, differ from their counterparts elsewhere in the province.

There are also times, however, when one’s local knowledge and proximity to wildlife can skew perceptions. Since the hunt’s cancellation, a recurring argument from people living in northern Ontario is that the bear population has erupted from decreased hunting pressure. While less bears were harvested in the initial wake of the moratorium, the current number of bears culled annually is just slightly less than the pre-spring bear hunt levels, or roughly six to eight percent of the population per annum. Currently the OMNR estimates the province has around 75,000 to 100,000 black bears, around the same range provided before 1999. Moreover, black bears have very low reproduction rates and high sensitivity to change in adult survival. Even with decreased hunting in the early 21st century, then, it is highly improbable that the population has explode.

Far more likely is that the increase is merely perception. Poor summer berry and fall mast crops, along with unseasonable weather was reported in the early 2000s and that might have driven bears out of the forests in search of alternative food sources.

Humans are also continually encroaching into the home ranges of bears. For example, more people are living in cottage country year round and often in areas that were once prime bear habitat. Therefore, we must also consider the increase in the number of permanent and summer residents in bear country as a factor, as more bear sightings or nuisance bear reports do not necessarily indicate more bears. However, there are also times when local knowledge can be appropriated by groups or individuals that have an overriding agenda. Organizations that favour bear hunting might often tally up anecdotal sighting information from across the province along with junk science to forecast a higher population. Some groups in the province have asserted that the black bear population is closer to 150,000. Unsurprisingly, the claim comes from ardent advocates seeking a reinstatement of the spring hunt.

Issues about the future of bear management in Ontario are important because the province is home to the third-largest black bear population in North America. Fifteen years after the ban, spring bear hunting remains a controversial issue, especially in certain locales where residents view it as a panacea to rising nuisance bear complaints. Many people consider the spring bear hunt be unethical because of the method of shooting bears over bait sites and how cubs are often left orphaned when their mothers are accidentally killed. Indeed, no other large game animal in the province is hunted during the spring when its young are still dependent and vulnerable, so it is only commonsensical that this same logic was applied to black bears. If a particular type of hunting is perceived to be cruel and unsportsmanlike by the majority of hunters and non-hunters in the province, do we not have the moral responsibility to cancel it, provided that doing so will not deleteriously affect ecological sustainability?

The spring bear hunt debate is far from over. While it seems as though the Wynne government is not keen on reopening this issue at the moment, it is not inconceivable that the hunt might be reassessed at a later date. When and if it is, we should remember the significance of local knowledge, tradition, and place. At the same time, we must listen to the opinions and views of those that live beyond the boundaries of bear country.