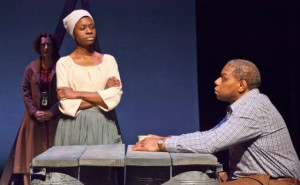 Alison Woolridge, Neema Bikersteth, and Jeremiah Sparks in Oil and Water at the Neptune Theatre. Photo via the National Arts Centre.

On February 18, 1942 off the coast of St. Lawrence, Newfoundland, the USS Truxton and the USS Pollux ran aground in the midst of a harsh winter storm. Of the 389 sailors on both ships, only 186 survived. Of those, one stood out: Lanier Phillips. After being rescued by a group of locals, Phillips became the first African American in St. Lawrence, an experience that forever changed him and the community.

That transformation is the focus of playwright Robert Chafe’s Oil and Water, which is currently running at the National Arts Centre. The show examines both Lanier’s background and that of the St. Lawrence townspeople. The two parallel stories come together in a beautifully poignant moment that demonstrates how our preconceptions can be changed in an instant.

Until his death in 2012, Lanier Phillips remained an extremely popular figure in Newfoundland. In an interview just before his death, he said that the experience changed him, eventually leading him to the Civil Rights Movement: “I just had to join up with Dr. King and that’s because of the change they did for me in St. Lawrence.” After growing up in segregated Georgia, it was his brief time in Newfoundland that erased the hatred with which he grew up.

The two days Phillips was in St. Lawrence proved transformational for the community as well. During a period of Newfoundland’s history that was generally looked upon unfavourably, Phillips’ telling of the story of his time in St. Lawrence provided the community an opportunity to celebrate its history. For as much as the town changed Phillips, Phillips changed the town.

In this episode of the History Slam, I talk with Robert Chafe about Oil and Water. We chat about Lanier Phillips’ legacy, the challenges of representing a true story on stage, and the development of Newfoundland culture. In particular, we discuss the Newfoundland accent and the rare occasions when it is presented in Canadian culture outside of comedy.