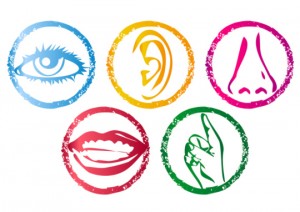 Like most of us humans—80% in Canada, more than 50% worldwide—my home is in the city. And like so many urbanites, I take a whole range of day-to-day sensations for granted. The screech of garbage trucks, the overheard conversations on public transit; the smells of street food and exhaust; the sight of thousands of other people going about their lives.

I’m used to the way the city plays to—and sometimes overwhelms—my senses, so much so that I tend not to notice it. Except, of course, when I’m thinking like an urban historian. Then, it’s hard to ignore that peoples’ different sensory experiences of urban life really matter to understanding the past. In today’s post, I want to talk about how the “feel of the city” has come up in my own research, why it matters, and what one innovative UK project is doing to record and interpret it.

I’ve blogged before about my interest in Toronto’s Yonge Street. My dissertation follows some of the big public debates over the future of downtown that took place in Toronto in the 1960s and 1970s. Where did cars and pedestrians fit in? How should private development be managed? What were acceptable uses of public space? Yonge ran through all of those discussions. And while city documents, letters and newspapers allow me to reconstruct what people said and did at the time, it’s much harder to get at what they felt. Forty years ago, Yonge was Toronto’s busiest and most happening street, theplace to be for people-watching, cruising, and window-shopping. What was it like to be a part of that?

It’s a question worth asking. We always interpret our attitudes towards a place through the lens of personal experience: how well we know it, the experiences we’ve had there, the emotions and sensations we associate with it. I argue in my work that Torontonians’ strong attachments to Yonge Street and downtown were an important factor in shaping political debates over its future. For one thing, they guaranteed massive public participation in discussions that, if they concerned other parts of the city, would have been much less significant. Of course, other historians have long recognized that everyday feelings and sensations matter to our understanding of the city. One great example of the trend is a new book by urban historian Nicolas Kenny that looks at the sensory worlds of Brussels and Montréal in the early 1900s. 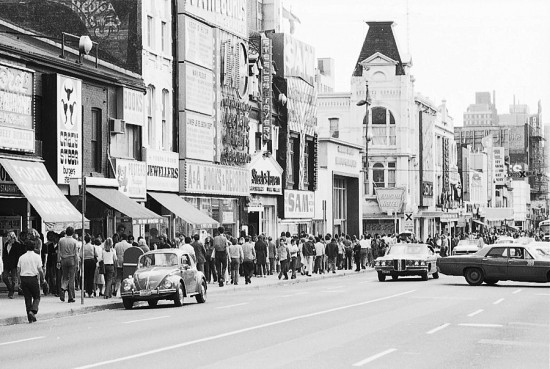 So how can we access what it was like to say, stroll down Yonge Street in 1970? One way to get at that experience is through art. In that respect, I’m lucky I study the recent past. Since the 1950s, Yonge Street has inspired more than its fair share of films, music, photographs, and poetry. Going Down the Road (1970) has some classic scenes of new Torontonians taking in the lights and sounds of the Yonge Street Strip. Those visuals are matched by some incredible contemporary photographs. Two of my absolute favourites are Charles Dobie‘s daytime scenes, and Citatus’ photos of thrill-seeking crowds on a summer night. 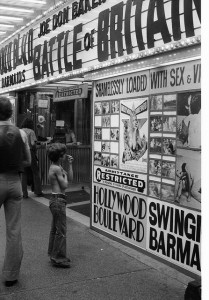 I often start off talks about Yonge with a few lines from a song about it, like this one by Ian Tyson that evokes “good times bought and sold.” Or a quote from author F.G. Paci’s Sex and Character (1993), with its breathless descriptions of what Yonge was like for a young man from northern Ontario in 1969:

The Yonge Street Strip was my favourite haunt. I liked strolling up and down the garish neon emporiums and fast-food outlets, the leather shops and dirty bookstores with the movie booths in the back. There were jazz and rock bars jumping with music. There were triple-bill theatres plastered with gaudy posters where derelicts and bums could sleep in the afternoons…On any night I could catch the Hare Krishna devotees banging on their bongos and chanting (89-90).

Another point of entry is careful readings of sources written at the time. For example, I’m lucky to have discovered a trove of hundreds of letters addressed to Toronto’s Mayor about Yonge Street in the 1960s and 1970s. Most of them are complaints targeting the sex industry. Others discuss the Eaton Centre project, or the pedestrian mall that closed the street to traffic for four summers in a row. They often include incidental details that I can’t imagine finding anywhere else: descriptions of the sounds of construction and sidewalk loudspeakers; comments on the people who hung around in diners and doorways; mentions of the smell of roasting chestnuts or the feeling of walking among Saturday afternoon crowds. A few enclosed physical copies of pamphlets and advertising materials that I haven’t seen anywhere else. But often enough, people don’t consciously record their feelings and everyday experiences without prompting.

Which brings me to the third way, perhaps the best way, of getting at the feeling of a street or city: ask the people who were there. I’ve done a bit of that in Toronto, since almost any native over the age of 60 has vivid memories of downtown in the period I’m interested in. But some researchers are making this kind of sensory urban history the focus of their work, and I’ve run into an excellent example in the first few weeks that I’ve been in the UK. This is social sensory history, and it’s a lot of fun to discover (and, I bet, to work on). 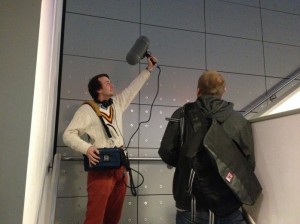 The Affective Digital Histories (ADH) project, based at the University of Leicester, includes an attempt to collect and showcase the sights, sounds, and smells of a well-known central city district. Like the downtown Yonge Street area, St. Georges is a part of Leicester that has changed quite a bit in recent years, transforming from a hub for hosiery and shoe manufacturing to a revitalized “cultural quarter” dotted with shiny glass buildings, arts groups, and funky cafes. In between, it went through a long period of economic obsolescence, during which its disused spaces were home to a variety of cultures and countercultures, from raves to meetings of the Leicester United Caribbean Association. 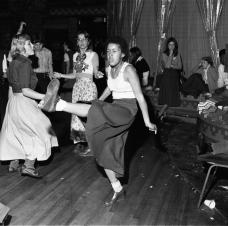 In an effort to understand and convey the different ways people have used this area, researchers are trying a number of approaches. These include crowdsourcing an attempt to reconstruct the area’s different historical soundscapes, and using an itinerant video booth to record an archive of memories on, among other things, the 1970s Northern Soul music scene. And then bringing those oral histories and sound reconstructions together to produce content for public consumption. There’s an openness to collaboration on the project–both with the public and with artists–that I think will be really valuable, both in getting more people involved and in keeping interest alive going into the future. I’m looking forward to seeing more of digital resources created by the ADH project over the next year. For now, I’m going to pay a bit more attention to the sounds and smells of my morning commute.

2 thoughts on “Feeling the City: Getting at the Historical Sights and Sounds of Downtown”