Over the past couple of weeks, the Active History editorial collective has begun the initial planning for a stand-alone conference to be held in late 2015 or 2016. Agreed that there was a need for a conference, we set about to determine the conference’s overall purpose and goals. What quickly became apparent was that we had slightly divergent views about the meaning and practice of Active History. As our conversation continued (and moved toward fruitful resolution), it occurred to me that these varied perspectives might be of interest to the broader readership of ActiveHistory.ca and, through the comments section, provide a good opportunity to hear about your thoughts: What is Active History? 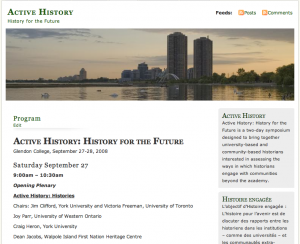 Website for the symposium Active History: A History for the Future

Before getting into the specifics of how we define and think about Active History, though, I want to provide a bit of context for the project as a whole. The idea of there being something called “active history” first emerged during a relatively informal gathering in downtown Toronto in late autumn 2007. Our conversations at that time were focused on building a creative environment for historians with an interest in using their work to bring about (positive) social and political change. Our conversations sought to build on what we saw as a long tradition of active history that looked for models in the work of Charles and Mary Beard and Howard Zinn in the United States, E. P. Thompson in the U.K., and Natalie Zemon Davis (whose work transcends national boundaries). We even discussed, in the Canadian context, whether our country’s best-known activist historian, Jack Granatstein, fit into our understanding of what it might mean to be an active historian. These discussions culminated in a two-day symposium called Active History: A History for the Future, where university-based, community-based, government-based and museum-based historians came together to discuss ideas related to practicing an active history.

Out of that event emerged this website and an independent francophone website called HistoireEngagee.ca. Though created through the symposium, neither website defined itself solely by the symposium’s original mandate and most of the people involved in creating these sites were not actively involved in planning the earlier event (though there was some cross over). Added to this was the fact that we really didn’t understand what would make the website work. The original vision for ActiveHistory.ca was something much more along the lines of History & Policy in the UK. Anchored in our paper’s section, the project aimed to publish relevant research-based position papers on emerging issues of public policy. Slow to draw interest – though one of our most popular pages remains one of our first published papers – a number of us began to blog about relevant issues related to the past and the work of the historian. It was not long before interest began to pick up. Very quickly, the group blog became the bread and butter of ActiveHistory.ca.

These two trajectories shape the key differences in how Active History is defined. Last month, Andrew Nurse identified two divergent perspectives in the meaning of active history in his post “A Healthy Custom.” I would like to add three more ways of conceiving of active history to his list, alongside some accompanying examples from our blog. The five “types” of Active History can broadly be described as:

In making these distinctions between types of active history, it is not my intention to suggest that one definition is more accurate than another. Nor is it my intention to present active history as a significant innovation in these broad ways of approaching the past. There are numerous examples of the types of active history I have listed above that pre-date the label “Active History.” (In Canada, the earliest example I have found of what I would call an “active history” is T. Watson Smith’s exhaustive 1898 essay “The Slave in Canada.”)  Similarly, most projects I might define has examples of  “Active History” fit into more than one (and sometimes all) of these categories. In effect, I think the term “Active History” gives a name to a broad set of long-standing practices that are often discussed separately and are sometimes not identified as relating to each other.

A problem arises for me with the term “Active History”, however, because within this flexible definition weight is often placed on one or two of my above types, while minimizing or ignoring the others. The definition of active history changes with the historian, it seems. At its most extreme, for example, some people use the term “Active History” to describe digital public history (an extension of ActiveHistory.ca), while others use it to describe collaborative research and writing practices or applied historical research. While there is common ground here, there are also considerable differences in how the term is being employed.

A number of years ago, Jim Clifford wrote an essay entitled “What is Active History?”  In that essay, Jim argued against the need to rigidly define the meaning of active history. I agree with Jim, for the most part. The meaning of Active History, and ActiveHistory.ca, has grown and expanded in exciting directions because of the project’s flexible definitions and openness to new endeavours. While at the same time, I think that “Active History” is something broader than the website and has stand-alone intellectual merit. It is therefore important to spend some time reflecting on the project’s overarching goals and purposes.

It is with this in mind that we’d like to hear your thoughts. We’ve never formally opened up discussion on this subject beyond the participants of the 2008 symposium and some of the most active contributors to ActiveHistory.ca. As we begin planning for our first stand-alone conference in over five years, it seems like an ideal time to ask again: What is Active History?

Thomas Peace is an assistant professor of Canadian History at Huron University College.

2 thoughts on “Towards an Active History”