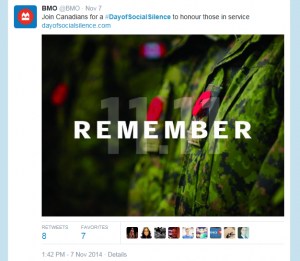 A rather curious promoted tweet from the Bank of Montreal appeared recently on my Twitter feed: “Join Canadians for a #DayofSocialSilence to honour those in service.” Not really grasping the connection between BMO, Remembrance Day, and staying off of social media for the day, I clicked the tweet to see what kind of response it was attracting. I continued to check in on #dayofsocialsilence occasionally in the days leading up to Remembrance Day and the hashtag didn’t really take off, nor did the original promoted tweets garner much of a response. On facebook, there was a bit more activity around the promotion, some of which was pretty hostile. Being asked by a bank to stay away from social media for twenty-four hours is not going over too well with many people.

The relationship between social media and Remembrance Day is an interesting one. Many people use social media to share stories of remembrance: photos of family members who served in various conflicts, photos from visits to memorials and battlefield sites, and opinions on war and its legacies. Given the utility of social media in sharing stories about war, it seems particularly odd that BMO would encourage us to stay away from it for an entire day in the service of remembrance. By trying to invent a new tradition that circumvents the way many people have already chosen to mark Remembrance Day, BMO’s #dayofsocialsilence comes off as particularly bizarre.

Despite the unpopularity of this particular example, BMO’s campaign reminded me that there is a long history of brands using Remembrance Day to capitalize on public sentiment surrounding war and memory. In the First World War, Frank Lind of the Newfoundland Regiment wrote a series of despatches from the front that appeared in the pages of the St. John’s Daily News. His repeated requests for Mayo variety cigarettes produced by the Imperial Tobacco Company prompted the company to send large supply shipments to the Newfoundlanders overseas and earned Lind the nickname of “Mayo” amongst his fellow soldiers. The free advertising Lind provided to the company allowed the soldiers to avail themselves of their cigarette of choice and boosted the company’s name and profile. 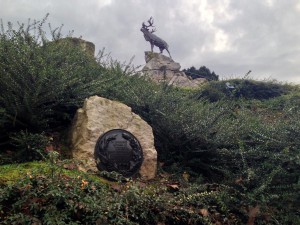 In Memory of “OURS,” Beaumont-Hamel

Lind died at Beaumont-Hamel on 1 July 1916, and a small plaque commemorating the relationship between the Newfoundland Regiment and Imperial Tobacco was placed at the battlefield memorial park at Beaumont-Hamel sometime in the 1920s. The plaque is still present at Beaumont-Hamel, lying largely obscured by shrubbery on the footpath leading towards the site’s iconic caribou monument. In the 1920s, as today, a corporate advertisement at a national memorial was somewhat unorthodox, and there is little surviving documentation as to how the plaque came to be there in the first place. The plaque’s wording—“In memory of OURS”—is not just a reference to Imperial Tobacco’s employees involved in the war, but also a common euphemism for the Newfoundland Regiment during the war. In this way, the company associated a national sense of pride and ownership that many in Newfoundland felt towards the regiment with its own brand. A 1997 Parks Canada inventory of cultural heritage artifacts at Beaumont-Hamel suggested that a formal policy on new plaques and memorials at the site be adopted and that any future plaques or statuary not directly related to the Newfoundland Regiment on 1 July 1916 be discouraged. Yet for those who know where to look, carefully pushed aside foliage reveals another layer in the story and a reminder that the relationship between business and remembrance is not a new phenomenon.

As battlefield pilgrimage became popular in the years following the First World War, advertisers bought space in guidebooks framing their wares as necessary tools for any battlefield traveller. The Michelin tourist guide originated in the early days of postwar car travel – what better way to tour the Western Front than in your own vehicle, equipped with Michelin tires? The company would even produce a guidebook to show you the way. 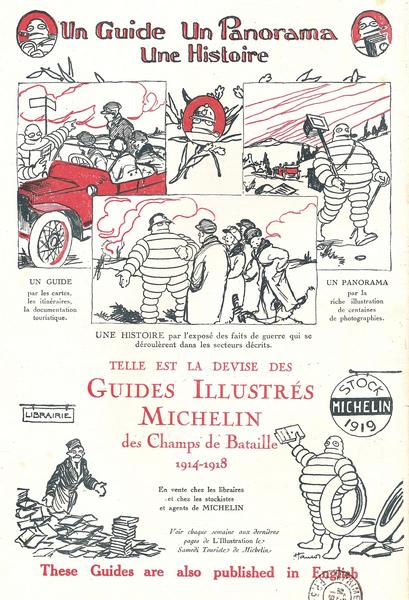 During both the First and Second World Wars, personal cameras were often advertised as an ideal gift for men about to depart for war. The photographs taken by individual soldiers on their own cameras both complement and contrast official photography. I wonder about how contemporary audiences reacted to these ads – crass attempts to capitalize on war? Reminders of luxury products they could not afford? Welcomed gift suggestions? Or just another image in a sea of advertisements? 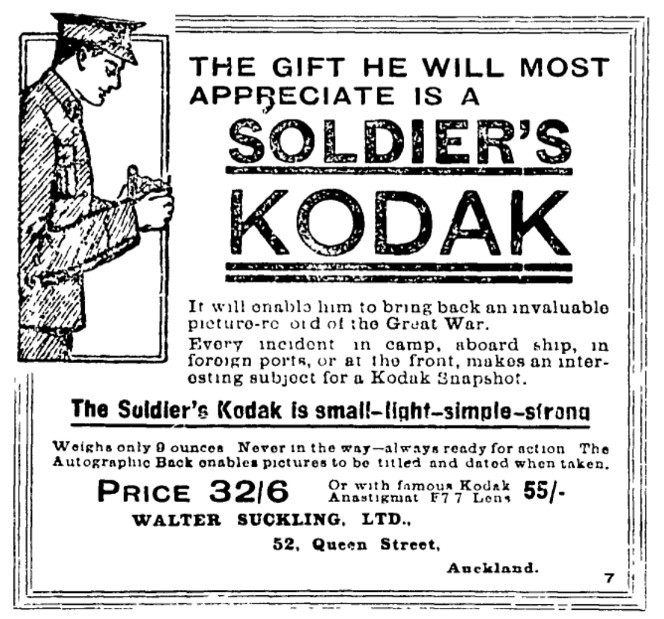 In later years, remembrance-related advertisements departed from products being directly marketed to veterans and their families. Documenting memories has been a central part of how camera companies have marketed their wares for generations and it follows that Canon Canada recently put out a call on their Facebook page for Remembrance Day photos. Canon fans can share a submission related to “something you are thankful for” and Canon will choose their favourite. How is the story framed here? User-generated content in the service of a brand, sure. But also a platform to showcase and share stories and images? While it’s unlikely an anti-war image would take the prize, the platform for sharing remains. I get that it’s hardly Canon’s purview here to provoke serious artistic meditation on the nature of war and remembrance, but the submissions posted so far lead to my next question, which is whether contests like this one (or the Legion’s Remembrance Day poster contest, participated in by many an elementary school kid across the nation) prompt their participants to recycle and rearrange the same images and symbols they’ve always received rather than create anything new. Do the images in ads and other Remembrance Day visuals (think of the plethora of poppy profile pics on Facebook) illustrate Benedict Anderson’s notion that symbols eventually eclipse the thing that is being symbolized? In a way, Remembrance Day visuals have become the “secular regalia” he describes: frequently reproduced symbols that reveal the reach and power of the nation-state.

Increased interest and participation in Remembrance Day ceremonies since the 1990s has certainly affected the way marketers incorporate commemoration into campaigns. Symbols (a Canadian flag on a backpack, poppy wreaths on a monument, black and white photos of the young uniformed grandfather) are in the foreground in the 1990s Bell ad where a young man phones his grandfather from Dieppe. The ad taps into larger cultural concerns about losing living memory of the Second World War and the role of youth in remembrance, but as with BMO’s #dayofsocialsilence, it’s unclear what the brand itself has to do with all of this.

A completely unscientific process in which a number of people have remembered this ad fondly in conversations about battlefield tourism reveals that the vitriol aimed towards #dayofsocialsilence is largely absent from reactions to this ad. One difference, I imagine, is that Bell wasn’t asking Canadians to do anything else besides remember (and potentially create positive brand associations while doing so). Airing on TV—a more passive medium than social media, where the audience can immediately make their displeasure known—also probably helped. The ad has been getting airplay again during the last few weeks, even though the grandson’s hair, clothing, and chunky cell phone with antenna immediately date it. The ad is a story about how Canadians (or the Canadian marketers tasked with representing products to us) thought about remembrance in the 1990s. It is a story that continues to evolve. 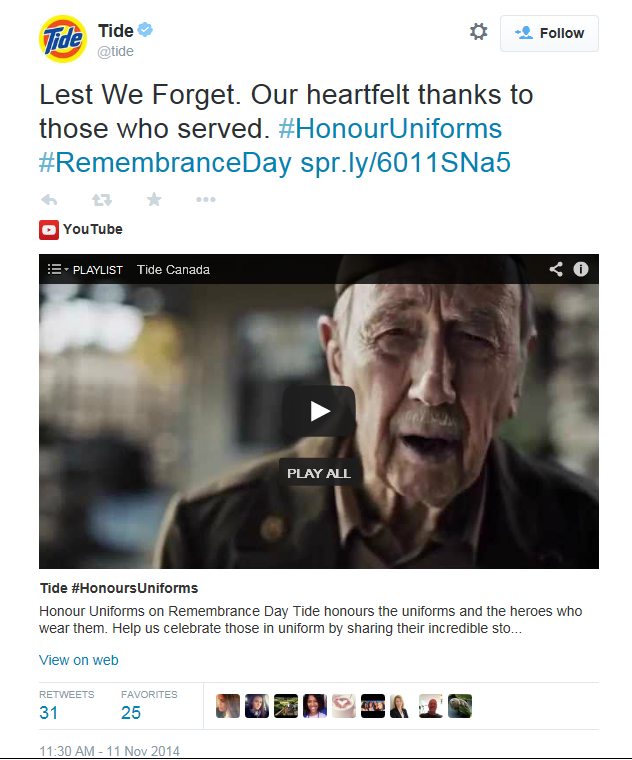 By contrast, the promoted tweet from Tide that rolled through my timeline seems to have been met with a hearty serving of disdain and contempt. The tweet reads “Lest We Forget. Our heartfelt thanks to those who served. #Honour Uniforms #Remembrance Day” and is accompanied by a promotional video. Replies ranged from criticism of the marketing ploy: “use your own personal accounts for this” to the puzzled: “Tide wants us to honour uniforms and those who wash them?” to somewhat more expletive-laced invectives.

Social media presents new challenges for brands intent on showing their devotion to/capitalizing on remembrance. It is easier for audiences to talk back and complaints can and do come in swiftly. Social media is pervasive and for many Canadians being online is a necessary part of their daily lives, which is another reason I found #dayofsocialsilence so misguided. Would a brand in the 1920s have asked people to stay away from print media or radio for 24 hours? Canadians increasingly use social media as a way to talk about Remembrance Day—from all sides of the political spectrum. The Historica-Dominion Insitute and Rethink Communications recently won an award from Mashable for their use of promoted posts on Snapchat during Remembrance Day 2013 to promote Historica’s oral history Memory Project. Despite the plethora of sponsored posts about remembrance (from governmental, charitable, and corporate entities) in my Facebook and Twitter queues this year, no single entity controls the message about Remembrance Day on social media. I see the slogan “the personal is the political” demonstrated in the posts “real people” I know social media are making. Their posts vary widely: genealogical, contemplative, outraged, vague, specific, activist, pro-war, anti-war, left-wing, right-wing and everywhere in between.

Today, as always, many different interests attempt to frame the narrative on how we think about war and remembrance. It is important for consumers of media to think about who is producing these messages and for what ends. When a brand produces an outrageous connection between their product and Remembrance Day, people are ready to point out how specious that link is (viz the Tide example above). While I found #dayofsocialsilence particularly odd, it was part of a much older tradition of corporate interests weighing in on commemoration and attempting to shape the message about war and memory.

Angela Duffett is a PhD candidate in History at Queen’s University, Kingston and a former student guide at Beaumont-Hamel.  Find her on twitter @angeladuffett.