Active History is pleased to present our first Film Friday. If you have created a film about history and are interested in screening it on our site, drop us a line. 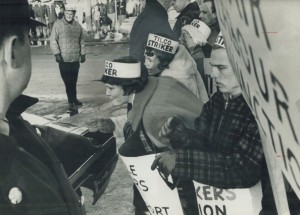 the middle of winter in 1965, women workers at a plastics factory in Peterborough, Ontario went on strike. The Tilco strikers were fighting against unacceptable treatment – harassment and pitifully low wages – from management. I originally made this short film as an entry to OPSEU Local 365’s contest celebrating Trent University’s 50th anniversary. The contest called for creative entries that highlighted the role of organized labour. The film is based on Joan Sangster’s 2004 article “”We No Longer Respect the Law”: The Tilco Strike, Labour Injunctions, and the State”, from Labour/Le Travail.

Being a filmmaker, I thought the contest was an excellent opportunity to attempt a translation of an academic article into an accessible short film. There are many challenges when doing this. Film as a medium works best when it focuses on image and sound, which often requires a simplification of the ideas presented in an article. Conventional documentary today is often built around talking head interviews, which I believe largely defeats the purpose of the medium, and so I tried with this film to animate it more effectively using archival footage. Film also works best when there is a coherent and compelling story to follow. As such, I focused on the tension between the women workers and one manager in particular, who was reportedly the most abusive. These decisions were made to provide not an exhaustive account of the strike, but rather an affective slice of this historical moment, to convey a different kind of truth. Some may find the film polemical as a result, but I felt this approach was necessary, based on the material in Sangster’s article, and admittedly my own politics. History is not objective, and any small foray into documentary filmmaking, in particular, immediately reveals this, providing a perspective different from that constructed by text.

Matthew Hayes is an independent filmmaker and PhD student in Canadian Studies at Trent University. His dissertation research will look at science policy and secrecy during the Cold War by exploring Canada’s UFO archive. His short films have screened at film festivals in Canada and the US. Follow him on Twitter @freefoodfilms.