This is the third of four posts marking the 35th anniversary of the Marathon of Hope. 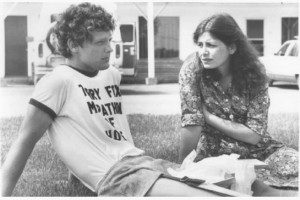 Terry Fox had character, and Canadians picked up on this right away. He was courageous, perseverant, pure at heart and youthful. Fox’s decision to run across Canada was a sign, as MP Stanley Knowles said in a 1981 speech in the House of Commons, that “our land is in good hands” and that, far from being the “me generation…our young people really have got something.” During the Greatest Canadian television series in 2004 Fox was described as “the best of who we are, or at least who we hope we might become.” Newspaper editorialists also praised Fox as a “doer,” who was “in a very special class,” who set a “new pace for the human spirit” and showed “that there is in young Canadians the same grit that enabled their forebears to tackle and tame this land.”

For many of his admirers, Fox also seemed to embody a particularly attractive vision of Canada. Leslie Scrivener, a Toronto Star journalist who befriended Fox, described him as “better looking that most with a well-scrubbed, intelligent face, straight teeth, and an Adonis-like profile…” Scrivener observed that “young women were intensely attracted” to Terry. Scrivener alludes to some romances with women who “might join the Marathon of Hope for a day or two along the road,” but reports that Terry said “he never fell in love.” Perhaps contributing to his appeal – for some – was Fox’s Christianity. Fox began attending a Baptist church with his (former) girlfriend Rika Noda prior to the run. Apparently his family wasn’t thrilled with this path but he continued during the run, where Fox read the bible to reflect on the meaning of life. Whether it was his articulateness, his looks, his values, or a combination of the three, Fox achieved “rock star” status as he ran across Canada.

Fox’s rock star status was at odds with his disability and illness. Historians have shown that people with disabilities have not been seen as normal within North American society. Instead, people with disabilities have been (and sometimes still are) treated as asexual, unproductive and incapacitated. This problem has led to the rise of a Disability Rights Movement in Canada that seeks to remove barriers to full participation in everyday life. Disability isn’t the problem, they argue. Rather, society is disabling for failing to accommodate a range of physical and intellectual capacities.

In her foundational work on representations of people with disabilities in Canada, Sally Chivers showed that Terry Fox’s disability tended to be erased in some accounts of his run and/or to overemphasize his courage in overcoming a physical difference. Representations of Fox often fell into what Disability Studies scholars call the “supercrip” trope. Fox was celebrated either for overcoming disability and or his courage in functioning with a disability. This way of seeing Fox becomes problematic, according to Chivers, because it implies that people with disabilities can only achieve in spite of their differences. Chivers’ critique of Fox has helped to deconstruct idealized representations of Canadian inclusion, drawing attention to the ongoing barriers faced by people with disabilities. It also points to a disconnect between the Disability Rights Movement of the late-1970s and early 1980s and Fox himself. 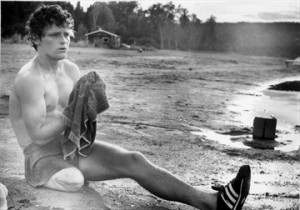 My research on Fox, including letters to the Prime Minister, media interviews with Fox and Hansard from 1980-1981, expands on this story. Alongside the “supercrip” trope were representations of Fox as a “tanned, curly-haired all-Canadian hero.” In these media stories as well as Leslie Scrivener’s stories about Fox, descriptions of his masculinity do not seem to be qualified by his disability. A classic compliment given to women who’s bodies don’t measure up to cultural ideals is that they have “such a pretty face.” The subtext is that such women would be truly beautiful but for their imperfect bodies. Praise of Fox’s looks and values was not qualified by references to Fox’s disability or illness. Some writers saw Fox as a heartthrob and this, too, adds to our understanding of his story.

Revisiting coverage of Fox, I also looked for evidence of what the runner himself may have thought about disability. We know from interviews and documentary coverage that Fox was careful about his public image. His public profile was part of his activism and he used his story to raise money for cancer research. Fox did not publicly align with disability rights causes but he may have drawn attention to the issue in other ways. For example, Fox put his prosthetic out there in public. He didn’t attempt to cover the leg. In many interviews, such as a 1980 CBC Metro Morning interview the runner talks in-depth about the process of fitting his prosthesis, referring to himself as an amputee. Fox also publicly stated that he didn’t like when people referred to his running gait as a “hop” or tried to race him because he saw running with a prosthetic as fundamentally different from running on two legs. In this respect Fox was in line with the thinking of disability sports advocates of the early 1980s who wanted their athletic endeavors to be seen as different, but equal to, other sports.

It is not uncommon for representations of the past to simplify complex experiences. The emphasis of news coverage on Terry Fox’s masculinity and good character and minimization of disability may reflect ambiguity about his body. Or, it might be that Fox helped to make disability public in a new way and in that way contributed to disability rights activism. It is likely that all these factors came into play. Fox was compelling and articulate and this excited many Canadians. Next week, in my final post, I’ll look at Terry Fox mania. The runner’s rock star persona inspired a range of spontaneous fundraising drives that were eventually focused into the annual Terry Fox Run.

One thought on “Terry Fox Was a Rock Star”