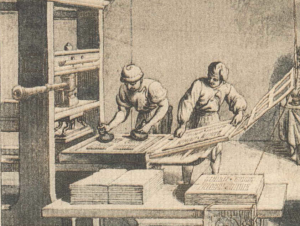 “Were I to name the most striking peculiarity of our neighbours in the United States, I would say that they are set apart from the rest of mankind by a certain littleness.” So wrote the pseudonymous Verax to the Nova-Scotia Magazine in 1789. Yet for the colonial print community of Halifax and Quebec City, being British meant “being part of something larger” (19).

One of the pressing questions for provincial Britons was how to be “British” despite their distance from London, the centre of imperial power. Michael Eamon argues in Imprinting Britain that eighteenth-century residents of Quebec City and Halifax used the press and various forms of sociability to fashion a distinctive British identity. At a time when British Americans in the Thirteen Colonies were wrestling with the same questions with strikingly different results, the colonists of these two cities chose to express their commitment to British liberties alongside propriety, civility, and monarchy. While affirming their place in the British Empire, elites in Halifax and Quebec also participated in the British Enlightenment, that cultural and intellectual movement that emphasized reason, practical scientific knowledge, and the improvement of society—the British Enlightenment tending to be more moderate than some of its more radical, republican expressions. The colonial print community of Quebec and Halifax, then, managed to express their liberty while remaining part of “something larger”—the British Empire and its moderate Enlightenment.

Imprinting Britain is a meticulous study of every extant English-language newspaper printed in eighteenth-century Quebec City and Halifax (among other printed and manuscript sources). But it is not only a study of texts or readers in isolation: this is a book about print as sociability, as well as print and sociability. That is, Eamon explores how print facilitated a communal identity, and how print interacted with other sites of sociability—clubs, lodges, coffeehouses, and theatre—to define Britishness in these colonial capitals. [Continue Reading]