“Capture the vitality of sunny summer!” 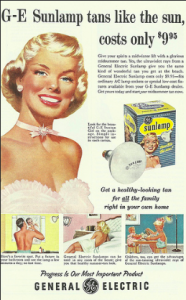 So read the headline of a 1931 General Electric (GE) ad, which encouraged Canadians to bring into their homes “the health-giving rays of the sun any hour of the day […] every day of the year.” Appearing in the November edition of Chatelaine, the advertisement enticed readers facing the start of a long, cold winter to bring in the sunshine by purchasing a GE sunlamp. The company insisted that its product would provide “resistance to colds and other seasonal ills [while] children grow sturdier and adults feel the vitalizing effect of the ultra-violet rays.”[1] With the ad promising that the GE Sunlamp was “as safe as the sun,” Canadians today, well-versed in the relationship between exposure to ultraviolet (UV) radiation and skin cancers, would be forgiven for viewing such a product with skepticism; but many in the 1930s embraced the gospel of sunshine, and sun-kissed skin was a hallmark of healthfulness.

The GE advertisement is reflective of a long-held conviction — one backed by scientific discoveries that developed in the late nineteenth century and built up steam by the 1920s — in the sun as a natural source of health. In 1877, two English scientists, A. Downes and T.P. Blunt, discovered that sunlight possessed bactericidal qualities, findings that supported germ theory, which perceived of sickness as something that could be cured by science. To that end, researchers worked on concentrating those beams of light for curative purposes. Most notable was Dutch doctor Niels Finsen, who pioneered phototherapy and showed how concentrated light rays, what he and his contemporaries called “chemical rays” (or ultraviolet to us) could penetrate the skin and be used to treat bacterial disorders, like lupus vulgaris, a discovery that led to his winning the 1903 Nobel Prize in Medicine.

Doctors practicing in Canada were well aware of these discoveries. In the medical literature, the reaction was essentially this: we’ve known all along that the sun was good for us, now science has proven it. Indeed, in the late nineteenth century, women’s magazines, for example, were rife with articles about the benefits of taking a walk or a ramble outdoors in order to absorb fresh air and sunshine, which purportedly bolstered constitutions and prevented or cured a host of illnesses. By the turn of the century, it was common to find articles in the Canadian medical press that depicted the body as vulnerable to its immediate environment, with a person’s local environment being a determining factor of health or illness. High on the list of ensuring an adequate environment that promoted health was access to sunlight. The powerful rays of the sun, the thinking went, would penetrate the skin and restore the body to optimal health, with a glowing tan as evidence.

This understanding of the body as permeable entity[2] provides us with another example of balance at play: light versus dark skin, where light could be described as pale or sallow and considered unhealthy versus dark, usually described as bronzed, brown or tan, and was a symbol of vitality. And it was this particular notion that tanned skin equalled healthy skin that leapt into the pages of the popular press in the early decades of the twentieth century. Of course, we need a caveat: medical literature, newspaper and magazine articles at this time were written primarily by white authors for a predominately white audience; so in this dichotomy, it was not natural darkness that was preferred, but darkness naturally acquired.

Accessing sunlight and showing off a tan became de rigeur. “The acquiring of a tan,” wrote a journalist for the The Globe in 1929, “[is] no longer a careless sporting in the sun, but a conscientious duty.”[3] An article from 1931 spoke of “that eminent specialist, Doctor Sun.” The author described the permeability of the body, suggesting that “the sun works mysteriously through the skin and causes certain changes in the blood, which in turn, affect every part of the body.”[4] By the 1940s, journalists were writing that “sunbathing has a vital affect on the adequate nourishment of the body,” claiming that “a tan is a fashionable advertisement for health.”[5]

As the tan became a fashionable marker of health, the sun became commodified. Electrical manufacturers like General Electric produced ultraviolet lamps and marketed them as “sun lamps” for the home. Here was an opportunity to harness the power of ultraviolet rays in the comfort of one’s own home, without having to rely on fickle nature. Artificial sunlight provided the perfect solution to cloudy days, Canadian winters, or even environmental pollutants like smoke, which could interfere with the penetrative ability of UV rays. The sun might hide behind clouds, or it might lose its strength over the winter months, but the ultraviolet lamp promised year-round availability, reliability, and control, allowing the user to at least try to cash in on GE’s promise to “capture the vitality of sunny summer.”

These particular technologies of sun-making may now be discredited, but machines much like them have by no means gone away, promising to fix everything from Vitamin D deficiency to seasonal affective disorder. Their historical evolution can tell us much about how medical science, technology, and popular conceptions of “health” have collided in unpredictable ways.

Dorotea Gucciardo of King’s University College at Western is the new president of the Canadian Science and Technology Historical Association.